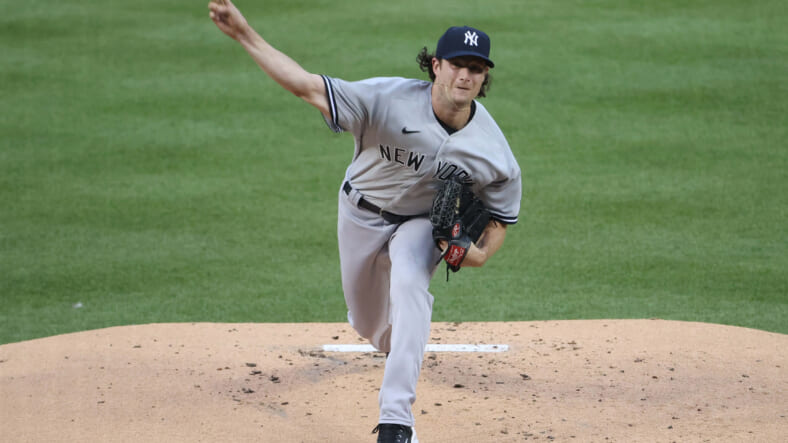 The New York Yankees‘ Gerrit Cole, in a big epic game against the Cleveland Indians 2020 Cy Young Award winner, Shane Bieber, Cole was nothing less than dominant. With 111 pitches, he threw 75 strikes, striking out 11 Indians in 7 innings of work without allowing a walk. He allowed one run and lowered his ERA to 1.71.

There is not much more to say. This is the kind of game the New York Yankees hired him to win, and he did it with style. He looked totally confident and showed it in the results, getting the Yankees the win in a one-run game.

Ever since the New York Yankees acquired Rougie Odor from the Texas Rangers, the Yankees seem to be different. It’s hard to explain because his batting average stinks. But that being said, he is turning out to best one of the best situational hitters. He has 3 home runs on the season, only playing in 10 games. But in the Yankees’ last 7 wins, he has had the deciding run in three of them.

Ex-Yankees Erik Kratz, who was a veteran catcher that certainly understands the game and the Yankees, had this to say on his Twitter account:

gives them the swag they need outwardly. He brings a dynamic that combined with the other talent already on the roster could make them lethal, even if statistically he doesnâ€™t play well.

Last night he hit his third home run and made some excellent plays on the field, and showed his leadership with two visits to the mound to discuss plays.

Yankees bullpen gets the job done

Gerrit cole last night went 7 innings saving the bullpen much stress trying to cover many innings as they have had to do in many games this season. Last night the bullpen was again excellent. The Yankees rested the rest of the bullpen using just Justin Wilson and Jonathan Loaisiga. Wilson pitched 2/3rd of an inning got two Indians out, and then walked a player, bringing in Loaisga to get the last out of the eighth inning. Loaisiga closed out the game for the Yankees in the ninth inning.

Jonathan Loaisgia gets his first save

Jonathan Loaisgia had been with the New York Yankees for three major league seasons, this being his fourth. During that time, he has opened games and been a dependable reliever. This year he seems to be coming into his own. He was the best Yankee pitcher in spring training, and so far in the regular season, he has been plain masterful. With that comes the respect and confidence that the club can put him anywhere in a game.

Last night with Chad Green and closer Aroldis Chapman unavailable, manager Aaron Boone showed his confidence in Loaisiga by assigning him to close the 1 run game for the New York Yankees. In his career, he earned his first save last night, putting down four straight Cleveland Indian batters and lowering his ERA to 1.35 on the season.