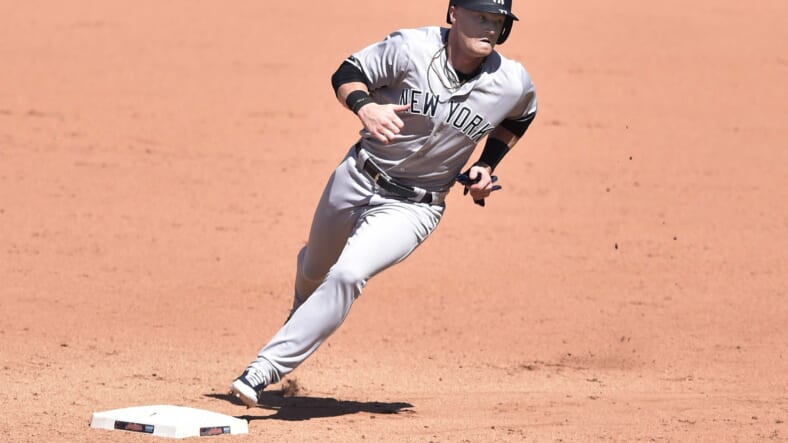 Clint Frazier may not have started the game, but he sure helped end it for the New York Yankees. Pinch-hitting for Mike Tauchman in the sixth, Frazier struck out but would remain in the game with him being the only outfielder off the bench. In the eighth inning with two on, Frazier bashed a 2-2 slider to left field with no doubt, giving the Yankees a 6-4 lead that would hold for a win.

The Judge with two verdicts

Yankee slugger Aaron Judge finally got on the board with two home runs on Saturday, both to center field.

On his first home run, he swung at a 2-2 fastball that got too much of the zone for a solo shot, putting the Yankees up 1-0 in the first inning.

In the third inning, he put a full-count slider over the wall that was a bit too high in the zone for Oriole pitcher Dylan Bundy. Bundy lasted just 3 2/3 innings.

JA Happ didn’t have a great outing in a rematch against the Orioles, and Jonathan Holder sorta made a mess in relief.

Happ pitched just 4 1/3 innings while allowing five hits and two runs while issuing two walks and punching out five. The lefty threw 88 pitches, and had trouble keeping the ball out of the air. He got six fly balls compared to two ground balls. However, Happ gave 12 of his 20 batters he faced a first pitch strike.

Holder was quite wild in relief of Happ. He only had one first pitch strike against eight batters. After a clean start, Holder hit Cedric Mullins with a pitch and allowed Jonathan Villar to single in the seventh inning.

A fielders choice hit by Chris Davis and a sacrifice fly by Rio Ruiz scored those runs. It seemed that Aaron Boone tried to stretch Holder too far. (Side note: Davis hasn’t gotten a hit in 40 consecutive at-bats)

Ottavino came in after for five outs, and despite only one strikeout he got the job done. It took Chad Green 16 pitches to get the final out of the eighth after an error by DJ LeMahieu.

Aroldis Chapman came in and got the save in the ninth. He looked good, but he isn’t quite at his 100-102 MPH fastball. He was maxing out at about 97 MPH.

The Yankees and the Orioles conclude their series on Sunday at 1:05PM. Domingo German will get the ball for the Yankees against the Orioles’ David Hess. The game will be on YES Network, Fox Sports Go, ESPN+, and out of market on MASN.