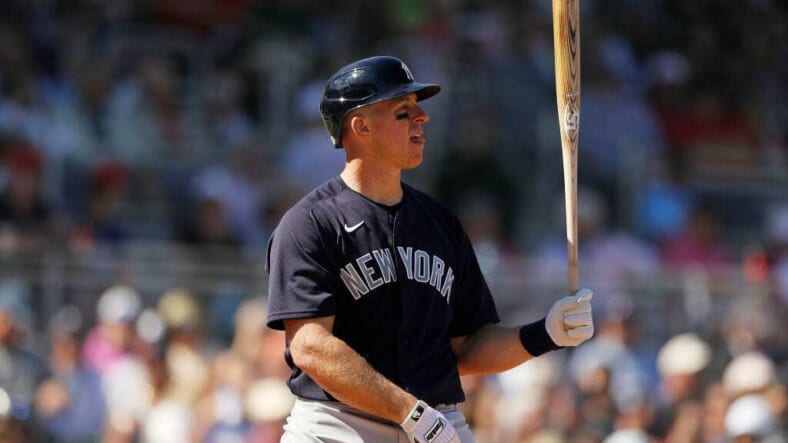 It was a surprise for the casual New York Yankee fan when the little-known Erik Kratz burst on the scene late in the 2020 season as the Yankee catcher who caught Deivi Garcia’s Major League Debut. Before we get into that, it’s important that you know a little more about Kratz.

Kratz was a journeyman catcher for his 18-year baseball career. After playing for seven years with minor league affiliates of the Blue Jays, from 2002 through 2008, Kratz signed a minor league contract with the Pittsburgh Pirates in 2009. It is with the Pirates that Kratz made his Major League debut in 2010. Throughout his career, Kratz was known as an excellent defender but a sub-par hitter, causing him to play second fiddle to the starting catchers for nine different teams. But throughout his career, he was also known for identifying and working well with young up and coming players and catchers. His longest stint was with the Philadelphia Phillies, where he caught for four years. He also caught for the Royals, Astros, Giants, Rays, Jays, Brewers, and of course the New York Yankees for two different stints.

After graduating from a Mennonite High School in Lansdale, Pennsylvania, he attended Eastern Mennonite University, where he caught for their baseball team. From 1999 Kratz caught every at-bat for every game he played in and was named the Old Dominion Athletic Conference Player of the Year twice. In his senior year, he batted .507/.563/.993, with 25 doubles, one triple, and 14 home runs with 59 RBI’s in 142 at-bats. He broke the NCAA Division III records for doubles in a career. He never reached that hitting dominance in the majors.

Kratz was traded to the New York Yankees in August of 2017, for the Yankees as they fought for a postseason berth; Kratz appeared in only two games as a pinch hitter, in both appearances, he got a hit, one a double for a batting average of 1.000 on the season. When the season was over, he declined an outright assignment to Triple-A at the start of November 2017 and became a free agent. On December 13, he signed a minor league contract with the Yankees. In 2018, playing for the team’s AAA affiliate in Scranton/Wilkes-Barre, Kratz batted .269/.356/.538 in 52 at-bats, but during May of the year, he was traded to the Milwaukee Brewers.

On June 8, 2019, Kratz signed a minor league deal with the Yankees. He batted .299/.375/.500, with 7 home runs and 31 RBI’s, in 154 at-bats for AAA Scranton/Wilkes-Barre. Kratz became a free agent following the 2019 season, but he re-signed on a minor league deal for the 2020 season. He was called up to the New York Yankees on August 8 after an injury to backup catcher Kyle Higashioka. During a pre-game interview in early September, Kratz became emotional when asked about his influence and role in helping young pitchers, particularly Latin pitchers, (he speaks Spanish) develop their game and succeed at the major league level. Kratz said:

Erik ended his 2020 season with one of the best batting averages of his career; he hit .321 and only stuck out 6 times in 28 at-bats. But that was not the highlight of his years with the Yankees; it was catching and particularly catching Deivi Garcia’s Major League debut. The two loved their relationship with Garcia saying in an interview that he owes much of his success to the mentorship of Kratz. Kratz also made the Yankees quote of the season. On August 31, 2020, Kratz left the dugout to catch for the Yankees. Looking back at the dugout, the 40-year-old yelled:

â€œIâ€™m so excited to go play catch with my son!â€

On November 6, 2020, Erik Kratz decided to call it a career and retired from baseball. He cited wanting to spend time with his wife and family. He is now home with his family in Pennsylvania, enjoying his retirement and deciding his baseball future.Â  With his ability to relate and work with young players, he certainly has a lock on being a coach for one of the 30 Major League teams. Still, many industry insiders say that he is manager material. I can’t forget to mention that on September 20, 2020, Kratz became the oldest position player to pitch for the Yankees and his knuckleball was nasty. Recently The Atlantic caught up with Kratz at his home and interviewed him on his retirement and future. When asked about how his first season in retirement was going, he had this to say:

Itâ€™s a little bit different. As a player, my focus and approach was always to leave no stone unturned. I just would do everything I could to be ready for the season, because as a player, I never viewed myself as good enough to just kind of roll out there and see what happens. If I hadnâ€™t retired, I would have started throwing two days ago. Itâ€™s nice to not have to do that. Iâ€™m not jonesing for like okay, we need some competition or something. I think I make myself competitive otherwise. It sounds so cheesy, but Iâ€™m working hard at being the best dad, I can be and the best husband I can be.”

The Atlantic also pointed out his special relationship with Deivi Garcias and other young Yankee players. They asked Kratz what it’s like to experience working with those players and their relationships.

“Weâ€™ve talked at length about Deivi and you know how his demeanor, his maturity, is above-average. But just because heâ€™s above average in those areas, it doesnâ€™t mean that heâ€™s already the perfect player or the perfect person. Thereâ€™s still like, not just baseball lessons but life lessons that will help him grow. But no way am I sitting here saying, â€œOh, you know, you guys need to listen to me. Iâ€™m a sage old veteran.â€ Thatâ€™s not how it works. Itâ€™s something thatâ€™s just a constant practice. Itâ€™s a, â€œshow me, donâ€™t tell meâ€ kind of thing. For me, I really enjoy that one. Itâ€™s practice for my kids at home, too. Itâ€™s really important to me that I could hopefully help somebody. I donâ€™t care if itâ€™s somebody just in the big leagues for three years or for 10 years.”

The magazine also asked the obvious question if he wanted to go into coaching. Kratz said, “when the time is right.”Â  He also stated that he received a Major League offer to coach this past season; he was flattered but wasn’t done playing. He also pointed out that he wanted to retire and be home, whether it be a year or 10 years when his youngest graduates high school. He also stated:

“To be particularly honest, I donâ€™t know that coaching is whatâ€™s best for me. Maybe it would be more like starting a mentorship program or having some type of front office hiring position. Thereâ€™s a lot of things that intrigue me.”

One this is for sure, still being relatively young Erik Kratz is a New York Yankee that we will hear much more about in the future, maybe working with young players again as a Yankee coach or manager. We know he will go wherever he can make the biggest impact. Kratz is an extraordinary individual.

40-year-old Erik Kratz is so excited to play catch with "his son," 21-year-old Deivi Garcia. pic.twitter.com/8TFNZcdKAF

Below is Knuckleball Kratz pitching for the Yankees on September 20, 2020.