New York Yankees: Can the Yankees figure out the Rays before they meet in September? 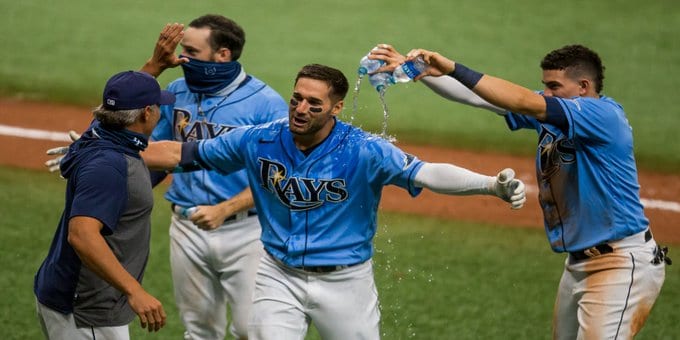 The New York Yankees cruised to a sweep of the Boston Red Sox and then did the same with the Atlanta Braves at the Stadium.Â  Then they hit a wall when the Tampa Bay Rays arrived in town.Â  The Yankees were swept by the Braves in three straight games.Â  It’s the first time the Yankees were swept at the Stadium since the Cleveland Indians did it in 2017.Â  What made the sweep even worse that it followed a four-game series a week earlier at Tropicana Field when the Yankees only won one of those four games.Â  The Yankees are now 1-6 against the Rays. They have something to solve before they meet again on August 31st.

The New York Yankees, that have slipped into second place behind the Rays in the AL East, cannot afford to lose more games against the Rays. Things went south for the Yankees in the first Rays meeting when slugger Aaron Judge was pulled from a game, after tweaking a right calf.Â  This was after Giancarlo Stanton got a hamstring injury running the bases at Tropicana Field.Â  In both, the first meeting and second meeting between the two teams the Tampa Bay Rays were the healthier team.Â  Poor Yankee pitching also dogged the Yankees in the series.

Since then Zack Britton and number two pitcher James Paxton have gone on the IL. Britton with the lesser injury, a slight hamstring pull.Â  The news for Paxton is not as good, he will be out for the next Rays meeting as well.Â  He will probably return in time for one of two starts before the regular season ends.

The Yankees certainly exercised their line of credit at the Bank of Good Outcomes last season, and the debts they incurred while racking up wins despite setting a record for stints on the injured list seem to have come due against the Rays this year.

When the Rays meet up with the Yankees again at the end of this month, for a series that will run into September, the New York Yankees will be healthier.Â  A big factor is that Aaron Judge will return to the lineup today, in the Atlanta Braves doubleheader.Â  The hitting machine, DJ LeMahieu, pitcher Luis Avilan, and Kyle Higashioka will also return for the Yankees by or during the next Rays series.Â  The return of Giancarlo Stanton and Gleyber Torres is less clear.

The Yankees have to improve their pitching.Â  Help may come by way of general manager Brian Cashman before the 4 pm trade deadline on August 31st.Â  The Yankees also have to return to a healthy team, and avoid further injuries.Â  Lastly, the Yankee hitting has to wake up.Â  The Yankees went 1-for-21 with runners in scoring position in this past Rays series, unable to get it done when their pitchers needed the help.Â  After the Yankees were swept by the Rays, Yankee manager Aaron Boone had this to say about the situation.

â€œAdversity, we know is inevitable,â€ manager Aaron Boone said after the loss. â€œItâ€™s gonna come in different ways, unexpected ways, and certainly in 2020 itâ€™s been a lot of unexpected ways. I do feel like weâ€™re uniquely equipped to deal with it and handle it, and thatâ€™ll be the expectation as we grind through a little tough spell here and a tough series.â€

â€œAdversityâ€™s coming our way whether we like it or not,â€ Boone said. â€œThatâ€™s part of this game and thatâ€™s part of being a major-league athlete and player and I donâ€™t care how great a season we have, we expect to have a great season and hopefully finish with a championship.â€