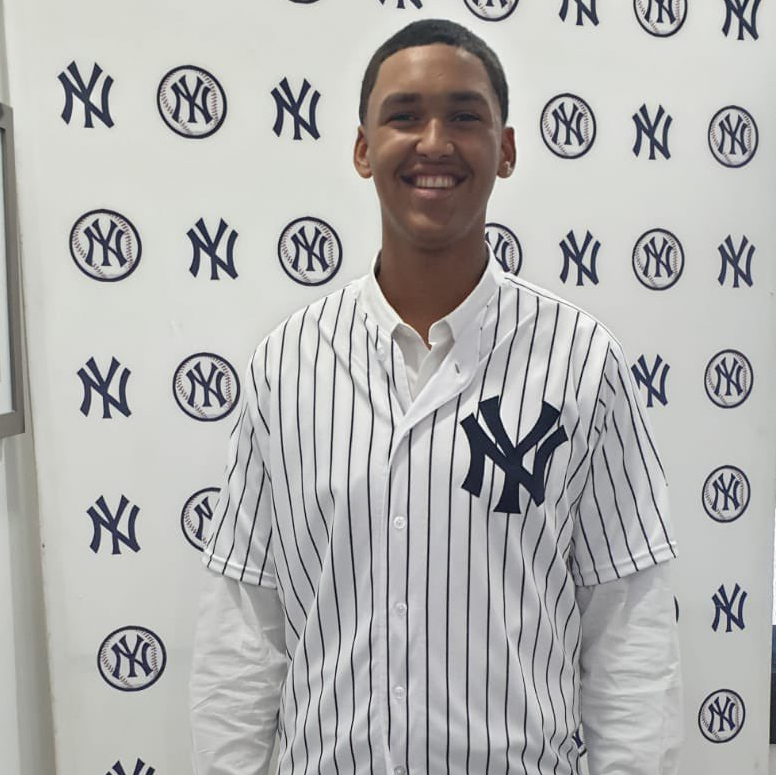 In recent years, the New York Yankees have been very active in the International Free Agency market. In 2019 they signed the phenom Jasson Dominguez, this year, they latched onto the number one prospect Rodrick Rias. But in 2021, they signed a very good pitcher in Henry Lalane, a 16-year-old from the Dominican Republic that has received very little publicity.

Some of the other international prospects that the Yankees hired are Bernie Williams, Robinson Cano, and the only player to be unanimously selected to the Hall of Fame, Mariano Rivera. This year, other international signings include SS Luis Suarez, catchers Diomedes Hernandez, Ricardo Rodriguez, and Enyer Urena. Add to that right-handing pitcher Xabier Marte and Omar Gonzalez.

Today, we delve into the now 17-year old that has been compared to the likes of Hall of Famer Randy Johnson. Henry Lalane is a lefty pitcher in the Yankees farm system. He is 6′ 7″ weighing in at 211 pounds. Signed out of the Dominican, he pitched in twelve games for the rookie-level Dominican Summer League when he posted a 3.70 ERA with 39 strikeouts in 41.1 innings pitched. When asked about his resemblance to the Hall of Famer Johnson, he had this to say:

“Since I started pitching, everybody would say ‘look, it’s Randy Johnson,’” Lalane explained via translator. “Then I started watching videos of (him) and tried to imitate and be like him because I liked the way he was very potent on the mound and very aggressive.”

The now 17-year-old Lalane throws a fastball in the low-90’s, a change-up, and a devastatingly severe curveball which he considers his best pitch. Fellow player Manuel Palenca said he has great execution with pitches that he exactly knows where to throw and is near impossible to hit. His fastball has sink and late-life. He also has a great curveball.

Lalane, also born in the shadow of Yankee Stadium in the Bronx, has lived both in the Bronx and in the Dominican Republic at different times while growing up. His father played Division l basketball at St. Francis College in New York and went on to play for the Dominican Republic National Team. His sister also played for the same league and today currently plays Volleyball at Indian Hills College in Iowa.

In one of his returns to the Bronx at the age of six, he became a strong Yankee fan. He frequently attended games with his grandfather. At eight, he returned to the republic and played little league baseball at the Javillla Academy in Santo Domingo. in his early years, he was an outfielder, but when he turned 14, he began pitching. It wasn’t long before he realized pitching was his game.

They put him against more challenging and tougher teams as he advanced pitching. Lalane said that that was when he gained more confidence and started to feel better about his pitching abilities. He took advantage of his dual citizenship by playing in several tournaments and showcases in the United States. That’s when Yankee scouts and others first noticed him. He traveled to America, and the New York Yankees signed Lalane on May 4, 2021; it was the first day he was eligible. Lalane had this to say:

“It means the world to me since I dreamed (as) a little child to play for the Yankees one day,” Lalane said. “I’m super happy and ecstatic that my dream is coming true to pitch in a Yankees uniform.”

This season when the rookie-level Florida Complex League begins its season that is scheduled to start in late June, he is expected to show off his pitching skills. It will be fun to watch this young player, that has been compared to Randy Johnson develop and hopefully advance in the minor leagues and start to fulfill his dream of playing at Yankee Stadium sometime after the 2025 season.