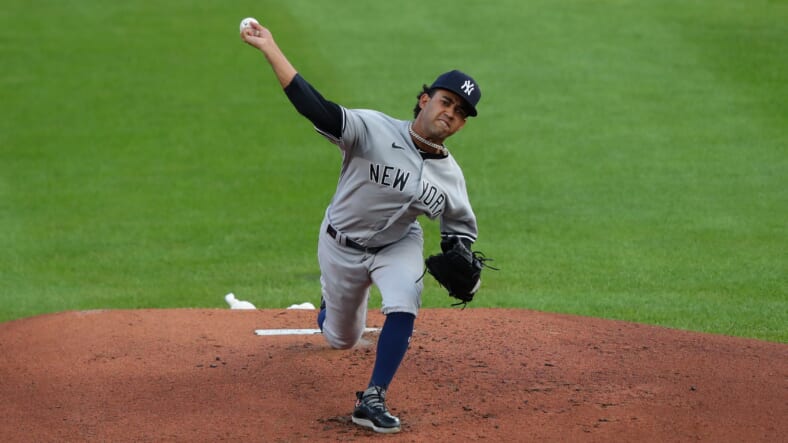 The New York Yankees packed up and left Cleveland yesterday, after the game to take part in a four-game set in Baltimore, with the Orioles at Camden Yards. Before we get into that upcoming series, let’s take a look at the season so far. The New York Yankees are now 9-12 (.429). They opened the season at Yankee Stadium, winning one of three against the Jays. They followed, winning 2 of three against the Orioles. They then took off for their first road trip and lost two of three games against the Rays. In Dunedin against the Jays, they lost two of three. Back at the Stadium, the Yankees were swept in a 3 game series by the Rays. Then split a two-game series with the Braves. That brings us to the good news, as the Yankees took three of four in Cleveland.

Now the Yankees move on to Baltimore, for a four-game set before going west again to play the Detroit Tigers. The first several series were Jays/Rays heavy, teams that will be the most challenging for the Yankees. This road trip should be much more favorable to the Yankees; they have already won 3 of 4 with the Indians and have always done well at Camden Yards. The Yankees in their history have won 400 more games against the Orioles than they have lost (1348-921). They have also won 53% of games against the Detroit Tigers. But many more recently, as the Tigers are not the team they once were.

We will not see New York Yankee ace Gerrit Cole in the Baltimore series, but he will start the first game against the Detroit Tigers.

The New York Yankees have called up Deivi Garcia from Scranton to start the first game of the Baltimore Orioles series today. Garcia did not make the Opening Day starting roster. He has been at the alternate site working on command issues with his slider. Garcia made his major league debut last season and pitched in six games. He won his debut game. He ended the season with the Yankees winning 4 of his six starts and with an ERA of 4.98.

In today’s game, Garcia will face the Orioles’ Matt Harvey. Harvey is a 9-year veteran, having started his career with the New York Mets. More recently, he has pitched for the Reds, Angels, and Royals. Now with the Orioles, he has pitched in relief and has started three games. His record is 1-1 with an ERA of 5.12 with 16 strikeouts over 19.2 innings. Harvey’s last winning season was in 2015 with the Mets.

Although Garcia is not officially with the team, he is part of the traveling taxi squad that is allowed to travel with the team. As the Yankees seem to be transitioning to a six-man rotation, he is also set up for his second start of the season in game two at Detroit.

The Yankees’ Corey Kluber will start game two. In Tuesday’s game, Kluber will, for the first time this season look to go deeper into the game. He has not gone a full five innings yets. The Yankees would like to see him complete six or seven innings in the game. His last time out against the Atlanta Braves, he went 4 2/3 innings. Kluber’s two problems so far this season, are the command of his pitches and allowing far too many walks (11 in 15 innings). The 2 times Cy Young award winner is 0-2 with a 5.40 ERA.

Kluber will face the lefty Bruce Zimmermann who is 1-2, with an ERA of 4.57 this season. It’s difficult to know what to expect from Zimmermann as he had two good starts to start the season but has lost his last two outings. He has gone 5 innings or more in three of his four starts.

Game three will see Domingo German back on the mound for his third start of the season. German is a bit of a puzzle. The 18-4 winner during 2019, sat out, the end of that season, and all of 2020 serving a suspension for breaking the MLB domestic violence policy. He came into spring training a big question mark but ended up being the Yankee’s best pitcher. But, in his first game of the regular season, he was lit up for 3 runs in 3 innings and was sent down to Scranton to figure it out. In his first game back, in Cleveland, he gave up 3 runs in the first inning but then pitched well keeping the team in the game that they ended up winning. The Orioles have not announced a starter for this game.

Game four will be started by the Yankees’ Jordan Montgomery. Montgomery is 1-1 with an ERA of 4.57. He fell 1/3 of an inning short of winning his last outing and was visibly irritated when he was taken out of the game. He has been the Yankee’s second-best pitcher so far in the season. He has gone six innings in two of his starts. A problem that has dogged him this season is giving up the long ball. In four starts he has given up 4 homers.

The Orioles will start the right-hander Jorge Lopez. Lopez is 1-3 with an elevated ERA of 8.15. Lopez like Montgomery is prone to giving up the long ball. He has allowed 6 homers in his four starts.