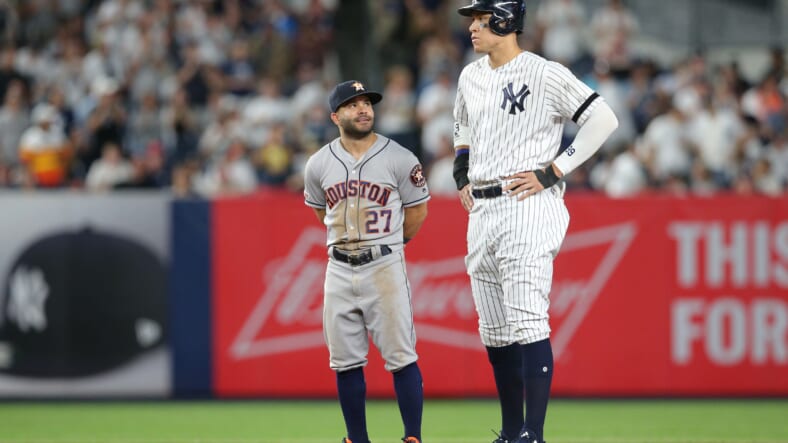 Last night the New York Yankees traveled to Houston to meet up with the Houston Astros in a three-game set. If there are two teams in baseball that don’t like each other, it’s the Yankees and Astros. It was proven that the Houston Astros cheated in the 2017 season and postseason. That cheating may have cost the Yankees a trip to the World Series and Aaron Judge an MVP award that instead went to the Astros Jose Altuve.

The cheating was finally confirmed in 2019. Although the manager and general manager were suspended for a year by MLB, no player was ever held responsible and the Astros were not required to turn in their rings or have their championship overturned. This infuriated the Yankees fans even more. With the short 2020 season, the two teams did not meet up. But this year the Astros traveled to Yankee Stadium where they were loudly booed there were loads of signs in the stands saying “you cheated.”

The New York Yankees, Yankee players, and fans will not soon forget. Presently the Houston Astro sit atop the AL West at 54-34 winning six of their last ten. The Yankees are 9 games out of first place in the AL East and have lost six of their last ten, including being shut out last night in Seattle.

Tonight in game one of the series the New York Yankees will face Jake Odorizzi. Odorizzi is a righty that is 3-3 with an ERA of 3.70 on the season. He will be making his eleventh start of the season. He missed a few starts in May due to injury. He is coming off a win against the Indians in which he only allowed one earned run. The Yankees are very familiar with Odorizzi from his time with the Rays and the Twins.Â  Miguel Andujar and Aaron Judge have been very successful off of Odorizzi. Rougie Odor in 9 at-bats against him has a .333 batting average.

The Astros will face Nestor Cortes Jr. When Corey Kluber went on the IL, Michael King was called up to replace him. King is on the IL. Nestor Cortes Jr. has filled in very adequately. He is a lefty that is 0-0 with an ERA of 1.29 over 24 innings of work. He last pitched against the Mets on July 4th when he gave up one run in 3.2 innings. The Astros have little experience against Cortes. Jose Altuve has faced him 3 times without a hit. The game will be televised on the YES Network, ATTSportsNet, and MLBN out of market.

Saturday night’s game looks like the game not to miss. It will feature two aces, Gerrit Cole for the Yankees and Zack Greinke for the Astros. Greinke has inherited the ace standing as the Astros still wait for Justin Verlander to return to the team from Tommy John surgery. Greinke who is 8-2 with an ERA of 3.64 has faced the Yankees several times including in the postseason. DJ Lemahieu has pretty well had Greinke’s number, in 35 at-bats he has hit .371. Giancarlo Stanton is the only Yankee to hit a home run off of Greinke.

Greinke will face the New York Yankee ace Gerrit Cole that has had some rough luck of late losing his last three starts. He is 8-4 with an ERA of 2.91 and an incredible 135 strikeouts. For Cole, it will be a reunion of sorts and he will be pitching to his old team before coming to the Yankees. Martin Maldanado has seen him the most and in 7 at-bats he has a .429 batting average. Yordan Alverez has two homers off Cole in 3 at-bats. Saturday night’s matchup will be nationally televised o the Fox Network.

Sunday, July 11th, 2:10 pm EDT:
Sunday’s Matinee will feature the Astros Framber Valdez a lefty that is 5-1 with an ERA of 2.86, against the Yankees’ Jameson Taillon with is 4-4 with an ERA of 5.05. Taillon is coming off his best start of the season against the Seattle Mariners, Taillon went eight innings giving up just one run in the Yankee’s 12-1 victory. Valdez is coming off two wins one against Cleveland and one against the Athletics. He gave up five earned runs in the Oakland victory. The only Yankees with extensive experience with Valdez is Rougie Odor who in 5 at-bats hit .400 off of him. Sunday’s game will be televised on WPIX and its affiliates, ATTSportsNet, and nationally on TBS.