New York Yankees: Analyzing the relationship between the Yankees and Umpires in 2019 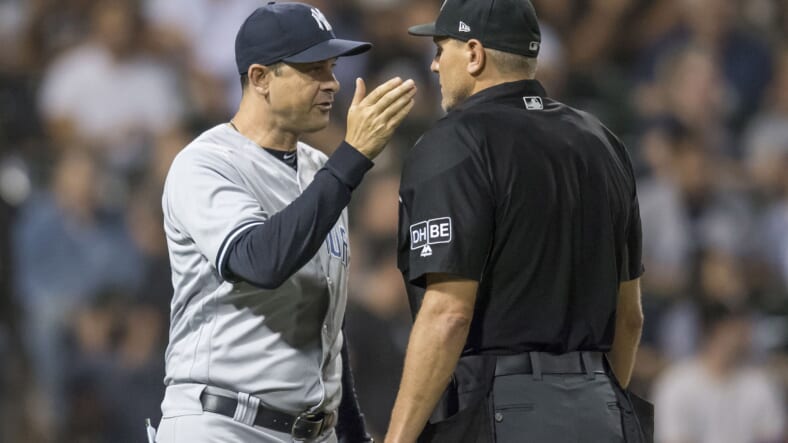 Will Yankee/Umpire relations improve during 2020?

As the 2000’s turn into the 2010’s many thought the Yankees most often got a break from the Umpires.Â  As an example, Leslie Monteiro of the Bleacherreport.com stated in an article, “When was the last time the Yankees ever gotten screwed in the postseason? How about never? If anything, the Yankees are always the beneficiary of the calls.Â  Look what happened to Game 2 of the ALDS last year(2009) when Phil Cuzzi ruled Joe Mauer’s hit a “foul ball” when it was fair. It spoiled the momentum of the Twins run late in the game, and it cost them the game and the series. The point is that most felt the Yankees never or almost never got calls against them.

Enter the 2017 season, Aaron Judge and Umpire Angel Hernandez and Joe West.Â  Not only is Hernandez usually called the worst umpire in all of baseball, but he had the nerve to sue the MLB and Joe Torre for discriminating against him for passing him over for a promotion to crew chief.Â  Joe West, on the other hand, is one of the oldest umpires in baseball and needs new classes.Â  Those two and a host of other young umpires seem to have a bias against the Yankees.

One commentator stated regarding the umpires: “There’s long been a huge problem with MLB umpires, stemming from the widespread attitude among them that it’s THEIR game; that they OWN it. There’s no respect for the strike zone. It’s whatever a particular ump feels like on any given day. And that’s subject to change at any moment. They squawked like old biddies back in the late 90s when the overhead plate cams came in, cause they didn’t want anyone to know how bad so many calls are. And too many infield umps don’t position themselves for a clear view of close plays. Finally, they’re being challenged more often, and the video doesn’t lie.”

Aaron Judge and the strike zone, or lack of it

This past 2019 season was an excellent example of it.Â  Let’s start out with mammoth Aaron Judge.Â  Umpires, in general, do not take into account his height.Â  Judge’s strike zone is higher than most players due to his 6′ 7″ frame.Â  The strike zone is supposed to be between the knees and the bend of the elbow.Â  According to rule 2.00 of the Major League Baseball rule book, a strike zone is defined as “that area over home plate the upper limit of which is a horizontal line at the midpoint between the top of the shoulders and the top of the uniform pants, and the lower level is a line at the hollow beneath the kneecap” and is determined by “the batter’s stance as the batter is prepared to swing at a pitched ball.”Â  Obviously, if the strike zone as perceived by umpires is the same for Jose Altuve the 5′ 5” Astro, as it is for Aaron Judge, there is an entire foot’s difference.

Judge is constantly called out on strikes that fall below the box.Â  If the umpires followed the rule book, Judge’s strike zone would be higher than most players.Â  If they applied the same thinking to strikes that are called balls within the high point of the zone, I would say okay, but that doesn’t happen, which shows their lack of applying the rule to his size.Â  Although he has every right to, Aaron Judge is a Jeter-like gentleman who seldom complains.

This past season the umpires seemed to be more interested in what was going on in the dugout rather than what was going on at home plate.Â  I don’t know if its ego or wanting to make a name for themselves, but they seem to think the game is about them and not the players and the game.Â  Umpires have no business starring in at the dugout to see if they can find a reason to throw players out.Â  Sometimes they hear something in the background and throw someone out without even knowing who they are throwing out.

Are umpires biased against the Yankees?

In a memorable game against the Rays in 2018, CC Sabathia hit Ray’s player Bauer on the bat butt that grazed his knuckles.Â  In the following inning, Ray’s pitcher Kittridge threw behind Austin Romine’s head in an obvious retaliation and was not thrown out of the game.Â  In the bottom. CC hit the Rays’ Sucre in the leg and was thrown out of the game, giving up a $500k bonus for innings reached.Â  This was also retaliation, but CC got thrown out, and Kittridge didn’t.Â  This was surely a case of players protecting each other.Â  The umpires did not do their job after Bauer was hit, the umpire should have warned both sides.Â  They then let the Rays pitcher get away with retaliation but not Sabathia.

Last year Manager Boone found himself arguing more with umpires than ever before.Â  Often over balls and strikes, which is not allowed.Â  But many of these calls were so wrong, that Boone couldn’t help but argue leading to him receiving his seventh ejection.Â  In a game in July,Â  Brett Gardner was called out on strikes, the third of which was far from a strike.Â  Gardner said nothing to the ump but returned to the dugout and banged a bat against the roof of the dugout.Â  There is no rule against banging a bat in the dugout, but Gardner was thrown out, and manager Boone went on an epic tirade against rookie home plate umpire Brennan Miller that CC Sabathia called a 10 out of 10.

August was a very bad month for Yankee and umpire relations.Â  In a game with Toronto at Rogers Center Umpire, Chris Segal kept starring into the Yankee dugout.Â  He heard something and threw out Brett Gardner.Â  Gardner stormed out of the dugout.Â  What fueled the Yankees outfielder’s fire was being blamed for something he didn’t say and paying the price with a quick ejection by Segal the rookie plate umpire. Â  During a lengthy tirade, Gardner had to be restrained by manager Aaron Boone from going after Segal.

In the 1980 bookÂ  “The Men in Blue.” it explains the fight between managers and umpires, and it went like this: â€œOne day the Devil challenged the Lord to a baseball game. The Lord, smiling, proclaimed: â€˜You donâ€™t have a chance. I have Babe Ruth, Ty Cobb, and all the great players up here.â€™ â€˜Well,â€™ snickered Satan, â€˜Iâ€™ve got all the umpires.â€™ â€ In another game on August 19, Garder got Boone got thrown out again, along with CC Sabathia, and Brett Gardner as the umpires went whacko.Â  Umpire Ben May ejected Aaron Boone, which led to the sequence of first base umpire Phil Cuzzi throwing out Brett Gardner, and CC Sabathia.Â  Gardner reacting to Boone being ejected, he used his bat against the dugout roof and was thrown out, then when CC reacted to that,Â  and he was thrown out.

The time has come for the computerized strike zone

With the lighted strike zone box, the fans can easily see when the umpire calls go astray.Â  Most reasonable fans are likely to let the close calls go as the umpire doesn’t have that box to go by.Â  But when calls are obviously very wrong, the fans boo and managers and umpires get into fights.Â  Of course, this doesn’t involve just the Yankees, other teams suffer the same bad calls that sometimes cost a team a win.Â  It’s time for the computerized strike zone.