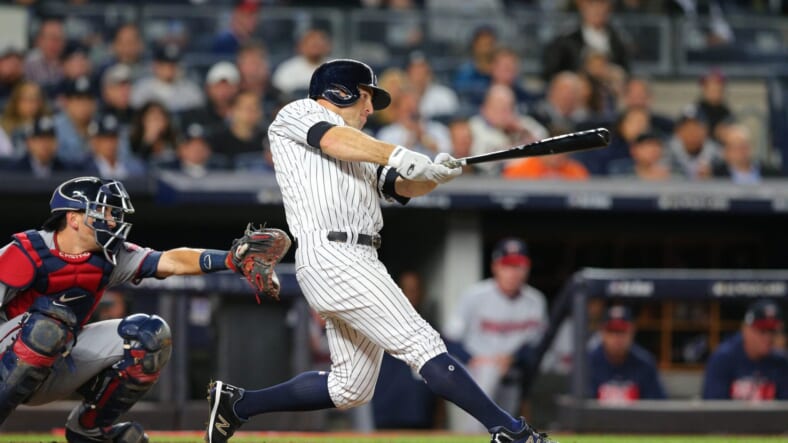 The New York Yankees have one of the best lineups in baseball. But they lack one thing, left-hand hitters. Currently, they have none on the roster. Aaron Hicks is a switch hitter, but he is the only one that can take advantage of right-hand pitchers. They are also not taking advantage of the Yankee Stadium design, namely that sweet short porch in right field.

The stacking of right-handers doesnâ€™t suit Yankee Stadium. Some of those right-handed batters, namely DJ LeMahieu and Aaron Judge, hit the ball the opposite way enough to take advantage of the cozy confines of River Avenue. The Stadium, though, is designed for left-handed pull hitters.

Other than taking advantage of that short porch, not having lefties in the lineup makes the job of selecting pitchers by opponents’ teams much easier, especially when calling in a reliever that must face three hitters. Although a team can win with an exclusive right-handed lineup, a manager’s ability to mix up the lineup is a definite advantage.

The Yankees do have lefties on the bench, Mike Ford, Mike Tauchman, and Tyler Wade. But last season, they combined for a .188 batting average, which will not win games. The Yankees need reliable left-hand hitters like Brett Gardner, Didi Gregorius, Greg Bird, and Jacoby Ellsbury that were all lefties for the Yankees in previous years. When healthy, these guys could all pull and hit the short porch.

Some of the greatest Yankee hitters of all time were lefties that used that short porch. Babe Ruth, Lou Gehrig, Roger Maris, Don Mattingly, Robinson Cano, Reggie Jackson, Yogi Berra, Wade Boggs, Graig Nettles, Bill Dickey, Earl Combs, and others were all left-hand hitters. Mickey Mantle, Bernie Williams, Mark Teixeira, Jorge Posada, and Roy White could all hit from the left when needed as they were all successful switch hitters.

There are two clear benefits to hitting left-handed. The first one goes back to the scarcity of lefty pitchers. A lefty hitter will get to bat in many more favorable matchups against righties than he’ll have to bat in unfavorable ones against lefties. A batter wants the pitcher he faces to throw the opposite of how he hits, giving him a clearer view of what the pitcher is throwing and more time to see the pitch, giving the hitter an advantage off the pitcher.

So if the New York Yankees want to mix up their lineup with a few left-hand hitters, who should they target. The obvious move would be to re-hire Brett Gardner. Gardner is not only the most veteran of Yankee hitters but if he can have a season as he did in 2019, he could be an impactful hitter anywhere in the lineup.

The Yankees could also target Jay Bruce. Bruce would be a backup for the often injured Aaron Judge. He has hit 300 homers in his career. He, like many players, had a sub-par season in 2020. But in 2019, for two teams, he hit 19, and for the Mets in 2018, he hit 41 long balls. He has a career .245 batting average. He is also nicely fitted to Yankee Stadium. He would be a cheap addition if the Yankees could sign him to a minor league contract and invite him to show his spring training stuff.

Probably the best left-hand hitter out there that the Yankees can afford is free agent Joc Pederson. The former Los Angeles Dodger destroys right-hand pitching and would be the perfect fit for Yankee Stadiumâ€™s short porch in right. He is not the defender that Gardner is, but his bat makes up for that. Against right-hand pitchers in 2020, he hit .382/.432/.559 in 37 plate appearances. If there is a problem, itâ€™s that he canâ€™t hit off lefties. Last year he batted .190 off lefties. That would be less of a problem with the Yankees as their right-heavy lineup seldom faces lefty pitchers. With an incentive-laden contract, the Yankees could probably land Pederson for $6 million on a one year contract. By the way, he is a Luke Voit look alike.

One interesting possibility is Tommy LaStella, the former Angel and Athletics infielder. He would be backup for the New York Yankees to play any position in the infield should any of the Yankee infielders be injured or need a day off. Coming to the Yankees would be like a homecoming for the northern New Jersey native. Last year with the Angels and Athletics, he hit .281 with 5 home runs while striking out only 12 times in 228 plate appearances. In the postseason, he hit .273 in the wild card and .313 in the ALDS. While there are others available, these are my best three fits for the Yankees.

The New York Yankees could also reengage Didi Gregorius’s services, which probably won’t happen, as the Yankees have little wiggle room in the 2021 budget if they are to stay under the luxury tax threshold.