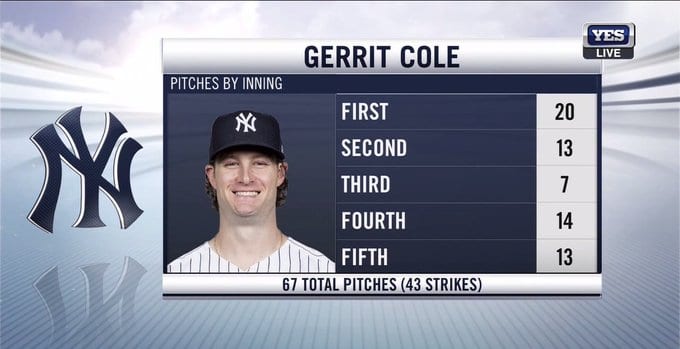 The New York Yankees brass and fans alike have to be pleased with the pitching exhibited in the first two intrasquad games of summer camp. Both starting pitchers in the first scrimmage, J.A. Happ and Clarke Schmidt pitched two scoreless innings in a game that saw nearly no offense. Both Happ and Schmidt looked very sharp and in command. Pitchers Zack Britton, Adam Ottavino, Tommy Kahnle, Jonathan Holder, Chad Green, Dan Otero, Domingo Acevedo, Tyler Lyons, and Luis Avilán. all got to pitch in the game.

Happ and Schmidt’s scoreless innings bode well for the Yankees for two reasons.  While Masahiro Tanaka is on concussion watch, Happ may be needed to fill in in that number three spot in the pitching rotation, that is already missing Luis Severino who will miss the season due to Tommy John surgery, and Domingo German who has to serve the last 60 games of his suspension, will cause him to miss the season as well.

As far as Clarke Schmidt is concerned with J.A. Happ and Jordan Montgomery being pushed up in the rotation, it may give a slot for Schmidt to fill.  He will be in competition with Michael King and Jonathan Loaisiga for the anchor job in the rotation.

Last night pitching ace Gerrit Cole went a surprising five innings and 67 pitches while putting down the last 10 hitters he faced.  Cole ended up allowing one run on one hit and two walks while striking out six. Cole had control of all four of his pitches. He highlighted his 97-mph fastball and filthy slider.

Cole faced up and coming pitching prospect Michael King.  King made his own impression by pitching two scoreless innings in this first appearance at summer camp.

This had to be an outing that impressed New York Yankee Manager Aaron Boone. Cole showed Boone and Yankee fans that he is ready to come out hot when he faces the Washington National’s Max Scherzer on July 23, opening day in the Nation’s capital city.

So far, New York Yankee manager Aaron Boone has given a look at what he describes as a season in which he will be “creative.” Boone in these two intrasquad games has used over a dozen relievers so that he can get an early look at his pitching staff, and how ready they are.

Pitchers will likely be coming into the season at varying levels of readiness, depending on how well they were able to stay sharp at home over the last few months. Talking about pitching options going into the regular season, Boone had this to say in a Zoom call:

“Obviously, to start the season, you’re going to have 30 players, so you’re going to have more pitching to choose from,” the Yankees’ manager said on a Zoom call. “So there may be days in there where you do get a little creative, where it’s a bullpen day, or you try and maximize your roster as best as possible and put guys in positions to where they can really impact the game on a given day.”

Boone has said he won’t be afraid to have a bullpen day or a game that will feature the “opener,” that was so successful last year. The Yankees utilized an opener 18 times last year, with Chad Green making 15 of those starts. For a 60-game season that will be the equivalent of six games.

So far from the New York Yankee pitchers, only Luis Cessa has tested positive for the coronavirus, he is recovering from a very mild case at his home.  However, more and more players are testing positive for the disease. Yesterday Oakland’s Jesus Luzardo and the Red Sox’s Eduardo Rodriguez (their best pitcher) tested positive.  It would be naive to believe that the Yankees pitching staff will remain untouched by the coronavirus or an injury.  In either of those cases, manager Boone has many excellent options to be creative with.