New York Yankees Analysis: Can the Yankees win it all? 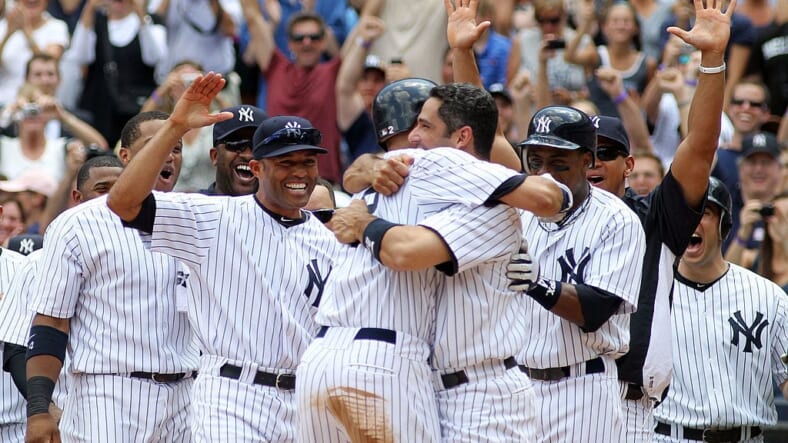 NEW YORK, NY - JULY 09: Derek Jeter #2 of the New York Yankees celebrates at home with teammates Jorge Posada #20, Mariano Rivera #42, Alex Rodriguez #13 and Curtis Granderson #14 after hitting a solo home run in the third inning for career hit 3000 while playing against the Tampa Bay Rays at Yankee Stadium on July 9, 2011 in the Bronx borough of New York City. (Photo by Michael Heiman/Getty Images)

Last night the unlikely New York Yankees stole the number one wild card berth from the Red Sox when they swept them in three games. The word unlikely is used because the Yankees have been so inconsistent during this entire season. Yankees fans hoped to get out of the weekend series with the Red Sox just alive. Never realistically dreaming of sweeping the Red Sox in their own Fenway Park.

But the Yankees are playing some of their best baseball of the season at the right time, making fans wonder if they can take it all. The answer is yes, although it will be a herculean feat to complete. Here is what the Yankees are up against.

With little or no margin for error, the Yankees of the teams ahead of them have the most difficult last six games. The Red Sox play the Baltimore Orioles and the Washington Nationals. Then, the Blue Jays play the Red Sox and the Orioles. Then, the Yankees have to play the Toronto Blue Jays at Rogerâ€™s Center starting tomorrow and finally the Tampa Bay Rays to close out the season at Yankee Stadium. The bottom line is that the Yankees will have to play their hearts out, win almost every game if they have any hope of reaching the AL Championship series, and even more to obtain their long-awaited 28th World Championship.

Any team can win any game on any particular day for a multitude of reasons. For instance, last night, two of the best Yankee defenders dropped the ball and could have cost them the game. Also, last night, unexpected injuries can raise their ugly head. Last night the medical staff had to visit the field three times in one inning. A pitch severely hit Joey Gallo. Aaron Judge jammed his hand, sliding into second. Third, judge dislocated his left pinkie while sliding headfirst into second base after smashing a two-run double, giving the Yankees the lead. After the game, Judge said it was no big deal after he popped it back into place.

Also, we don’t know how Joey Gallo’s shin is going to feel today; I think he was able to walk it off pretty well,” said manager Aaron Boone. “We’ll see. We’ll see how he is overnight.”Â  Also, a present mystery surrounds Gleyber Torres. Torres faced new Red Sox pitcher Ryan Brasier; he took a swing and may have injured himself as the medical staff was called in to check him out. Add to that, DJ LeMahieu is playing through a groin problem that caused him to miss a game on Saturday. Any of these injuries can turn a team upside down without notice.

If the New York Yankees can win all or the majority of their upcoming six games and the teams they challenged by losing one or two, the Yankees are assured on at least one wild card berth. The way this works is the non-division winners with the two best records (presently the Yankees and Red Sox ) meet in the Wild Card Game, with the winner advancing to face the team with the league’s best record (Tampa Bay Rays) in the American League Division series.

Should the Yankees win that series against the Rays, they will go to the AL Championship series facing whoever wins the White Sox Astros series. Should they win that, they will go on to play in the World Series against the winner of the NLCS, which at the moment looks like the San Francisco Giants have a good chance of being that team. The last time the Yankees faced the Giants in the World Series was in 1962 when they were victorious, winning 4 of the 7 games at the old Candlestick Park. Here is the postseason bracket.

The New York Yankees could do that, but at the same time, they could also not even get to play in the AL wild card. So everything is on them and how they play in the remaining six games this week. The season is on them. It sure will be exciting. Go Yankees!

The Yankees will start that effort Tuesday night with urgency at Roger’s Center in Toronto, Canada. First, the Yankees will send Jameson Taillon to the mound, coming off the IL with an ankle tear. He hasn’t pitched since September 9th. He will face the Blue Jays’ Hyun Jin Ryu. Then, the Yankees will send Gerrit Cole and Corey Kluber to start the last two games before moving back to Yankee Stadium for the final three-game of the season against the Tampa Bay Rays.

Tuesday night’s game will be televised SNET and SNET 1 in Canada and the New York Area on WPIX and its affiliates.