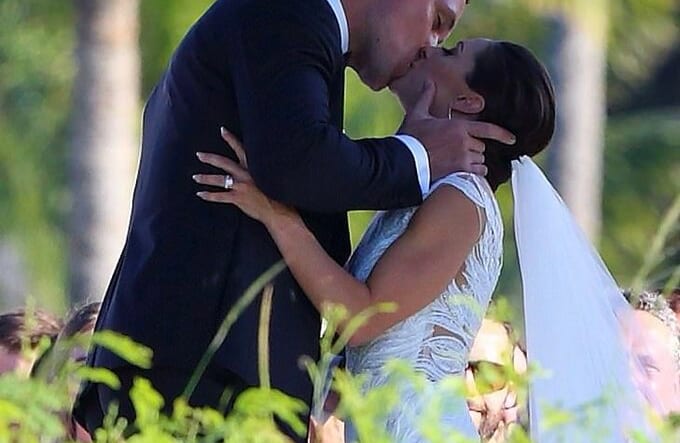 While there is not much going on with the New York Yankees, there is big news to report during the lockout. Yankee star outfielder Aaron Judge and his long-time girlfriend Samantha Bracksieck were married on Saturday in Maui, Hawaii in a private ceremony at a posh tropical resort.

Apparently, Aaron Judge is a one-and-done kind of guy, as he culminated a more than ten-year relationship with his high school sweetheart, and this weekend he sealed the deal with a passionate kiss after the pair made their vows. This is even more exciting because the pair managed to keep the impending nuptials mostly secret. Bracksieck was shown months ago with what appeared to be an engagement ring, indicating that an upcoming wedding might be in the books.

The Daily Mail first reported the wedding that was acknowledged by the venue. It was said to be an intimate wedding with only family and a few of the closest friends in attendance at the Montage Kapalua Bay resort in Lahaina, Maui, Hawaii. Recent photos showed Luis Cessa, Gary Sanchez, and Gleyber Torres, vacationing in Maui, it is assumed that they attended the wedding.

Judge and Bracksieck met in high school. At Linden High School, Judge was a three-sport all-star. The pair would go on to attend California State University in Fresno California, where Judge was named a Freshman All-American. The couple took a break in their relationship in 2016 but were spotted together in 2019 on a trip to London. Judge is 29, and Samantha is one year his junior.

Judge picked out the perfect place for the wedding, the Kapalua Bay resort. The resort sits right on the ocean with views of neighboring islands. As expected, the resort is quite exclusive, with suites starting at $3,400 a night. The wedding was held outdoors under a gazebo next to the ocean.

New York Yankees wrapped up the 2021 season when they lost to the Red Sox in the wild card game. Nevertheless, Judge had his best season since 2017 going on to be the Yankees’ most dependable player. Meanwhile, Judge has said that being a Yankee for life â€œwould be a wish of mine.â€ Now he will do it with his lovely new wife. So soon, there may be mini-Judges running around the bases. If the Judge and the Yankees disagree on a contract extension, he could become an unrestricted free agent after the 2022 season.