New York Yankees: A look at contract extensions for Yankee players, what you need to know 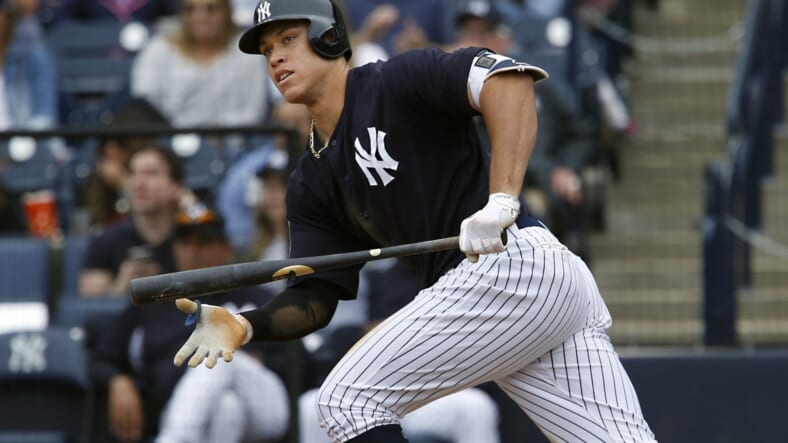 New York Yankees fans have wondered from time to time why the Yankees havenâ€™t locked up young talents like Aaron Judge, Gary Sanchez, and others.Â  The answer is likely to surprise fans; it doesnâ€™t have that much to do with the player, itâ€™s the owner.Â  Plain and straightforward, Yankee owner and managing partner Hal Steinbrenner doesnâ€™t believe in it.Â  Thatâ€™s not to be said that it hasnâ€™t been done, but it does suggest why the Yankees engage in contract extensions so seldom.

This past year was an exception.Â  Aaron Hicks was a season away from free agency at the time, though the outfielder chose to forego the open market in favor of a new contract that paid him $64M in new money through the 2025 season.Â  Hicks will reportedly receive a $2MM signing bonus in addition to a $6MM salary in 2019 before earning $10.5MM annually from 2020-23 and $9.5MM in 2024-25. The club option is said to be valued at $12.5MM (with a $1MM buyout), and while Hicks doesnâ€™t have any no-trade protection on the deal, heâ€™d receive a $1MM assignment bonus upon being traded.

Ace Luis Severino inked a four-year, $40M deal that covered his four arbitration-eligible years as a Super Two player, and the agreement also contains a $15M club option for the 2023 season, which would have been Severinoâ€™s first free-agent year.Â Â  The New York Yankee also arranged a contract extension for Aroldis Chapman, the Yankees designated closer.Â  Chapman declined his opt-out in this contract in favor of a contract extension that will bring him $48 million over three years.Â  It gives him another $18 million in the last two years of the extended contract.

Going back to Steinbrennerâ€™s dislike for contract extensions, the New York Yankees have only given extensions six times in the last eighteen years. Â  One was for CC Sabathia, who, like Chapman, waved his opt-out in favor of a $122 million extension in 2011.Â  Another was the extension for outfielder Brett Gardner who, before his free agency in 2014, accepted a contract extension worth $52 million over four years.Â  Gardner also just signed a new contract that will keep him a Yankee for another two years. The last year of his new contract includes an opt-out and buy out.

The main reason for Hal Steinbrennerâ€™s distaste for extensions is that all of baseball remains so fluid these days.Â  The market for free agents continually changes from year to year and avoiding extensions tends to give the club more options on a yearly basis. An example of that is that if fans got their way last year and the Yankees locked up Judge, Sanchez, and Andujar to long term contracts, It would have most likely not have allowed the Yankees to go out during this offseason and acquire Gerrit Cole for $324 million over the next nine years.

Back in 2010 Steinbrenner in an interview with the Associated Press, he shed light on the subject:

â€œI just donâ€™t believe in contract extensions, and thatâ€™s throughout the organization, no matter who it is.Â  Hopefully nobody takes that personally. Itâ€™s just business.â€

He also added that itâ€™s just against company policy.Â Â  Some good examples supporting that is when star player Derek Jeter came up for an extension, it wasnâ€™t offered.Â  Instead, Jeter went into free agency and eventually signed a new contract after some hard negotiations.Â  The same is true of superstar closer Mariano Rivera he went onto the open market before signing a new contract with the Yankees.

During this offseason, the Yankees not only did not offer any contract extension but did not take up any of the playerâ€™s options, instead negotiating with them separately for new contracts.Â  Donâ€™t look for the New York Yankees to be issuing any contract extensions in the near future, especially to Aaron Judge or Gary Sanchez, who both have long term injury issues.Â  If there is another exception to the rule, that would most likely be issued to DJ LeMahieu last yearâ€™s MVP, who will become a free agent after this season.

In the case of James Paxton and Masahiro Tanaka, both who are aging, it is likely that any new contract that the Yankees make with them will be made after the season has concluded if there is a baseball season this year.