New York Yankees: A Deeper look into Deivi Garcia’s promise in the majors 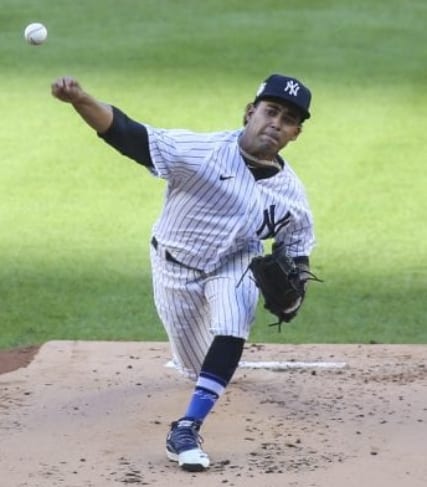 â€œIâ€™m going to play catch with my son,â€ that was the phrase shouted back at the dugout, when veteran New York Yankees catcher Erik Kratz left the dugout for home plate to get ready to catch Deivi Garcia, in his major league debut on August 30th.Â  The phrase was an obvious remark referencing the two playersâ€™ age difference.Â  Kratz is 40 years old, and the young pitching sensation is just 21. After two games together the two have formed a close bond, calling each other â€œHijoâ€ and â€œpadre,â€

After just three games in the majors, the small in stature Garcia has exhibited a calmness and a veteran demeanor much his senior.Â  Although not a terrifying figure on the mound he exudes a confidence that should make hitters take notice. In this first game, he pitched six solid innings without giving up a run.Â  In his second game, he got in trouble with 4 earned runs in 4.2 innings. In his game last night, he was brilliant going seven innings with 95 pitches, allowing two runs, no walk while striking out six Orioles.Â  In Deivi’s journey to the majors, he has always been appreciative of his opportunities.Â  After his debut game he had this to say:

“First of all, thank God for giving me the opportunity to play in the big leagues and secondly my family who is always supporting me and encouraging me through thick and thin also all those people who gave me their support from their homes, many BLESSINGS for each one and may God protect them.”

â€œWeâ€™ve gotten beaten up here for a couple of weeks, especially this last week, and have lost some tough games,â€ Yankees manager Aaron Boone said. â€œTo finally get back in the win column, I think gives guys a chance to exhale as we head home.â€

â€œHeâ€™s (Garcia) got a really good presence about him,â€ Boone said. â€œNothing really seems to faze him. Heâ€™s got a real feel for pitching. Itâ€™s fun to watch him.â€

This is the story of his rise to the major leagues. Â Deivi GarcÃ­a was born on May 9, 1999.Â  He grew up in Bonao, the Dominican Republic. He has two older brothers. His father, a youth baseball coach, also coached GarcÃ­a as a youngster. His mother, a doctor, set aside her career to raise their family.Â  The Dominican Republic has a bevy of young boys interested in baseball. Deivi (pronounced Davey) developed that same interest as a young boy and played baseball with friends in the sandlots around his home in Bonao. Influenced by his father he, developed a strong arm for pitching, although he played in the infield and outfield as well.

At the age of just sixteen, he made his way to the beach town of Boca Chica in the DR.Â  Boca Chica is the home of several baseball training facilities, including the New York Yankees baseball Academy. One day the Yankees top international scout Donny Rowland stood in the batting cage in the hot DR heat.Â  On the mound was Deivi Garcia.Â  Rowland watched and watched five pitches from a right-hander who would become one of the best pitching prospects in baseball, despite how hard it might have been to envision at the time.Â  The reason it was hard to envision is the young prospect was just 5â€² 9â€³ which is small for a pitcher.Â  He also had a slight build, more like a welterweight boxer at only 150 pounds. But Rowland was amazed by the young manâ€™s knee-buckling curveballs. Rowland immediately said get that guy off the mound, weâ€™re going to sign him. On a side note, Rowland also discovered Jasson Dominguez that is currently being developed at Boca Chica.

GarcÃ­a signed with the New York Yankees during July of 2015 for a $200k signing bonus. Though he previously played baseball as an infielder and outfielder, the Yankees were determined to have him become a Yankee pitcher, due to his curveball and arm strength.Â Â  For the next two years, trainers worked with Garcia at the Boca Chica facility. In 2018, GarcÃ­a pitched for the Charleston River Dogs and the Tampa Tarpons.Â  He made his final start of 2018 with the Trenton Thunder AA Yankee minor league affiliate as he continued to rocket through the minors.

GarcÃ­a returned to Tampa in 2019 and was promoted to Trenton after making four starts. In July he was selected to play in the All-Star Futures Game. After the game, he was promoted to AAA Scranton Wilkes/Baree RailRiders. 2019 was not Garciaâ€™s best season as he struggled at times and seem to tire, nonetheless, he continued to show his abilities.Â  Following the 2019 season, the Yankees added GarcÃ­a to their 40 man roster to protect him from becoming eligible in the Rule 5 draft. GarcÃ­a was named minor league pitcher of the year in the Yankees organization in 2019.

The Yankees sent GarcÃ­a to their alternate training site to begin the 2020 season where he continued to improve.Â  Yesterday on August 30, 2020, the Yankees were short starting pitchers, due to playing five games in just three days. In the second game of a doubleheader against the New York Mets, Deivi Garcia made his major league debut for the Yankees.Â  An unintimidating figure on the mound, Garcia showed the complete confidence of a much older veteran. He backed that up with a one, two, three first inning.Â  He struck out the side in the third. He ended up his major league debut pitching six innings on 75 pitches, allowing four singles, no earned runs, no walks, and had six strikeouts in a no-decision debut. He and Kratz worked seamlessly together, the two hugged in the dugout.Â  Only after the game did Garcia crack a smile.

Despite his complete control performances, he has no lock on entering the Stadium rotation. He will have to compete with the likes of Michael King and Clarke Shmidt for that job.Â  But, there is one thing for sure, that night at Yankee Stadium and last night in Buffalo, the young Garcia made his presence known, and showed the Yankee brass that he can hold his own in the major leagues. With the pitching injuries and inconsistent pitching of many of the pitchers, it appears Garcia has a place at the Stadium for the remainder of the season and beyond.