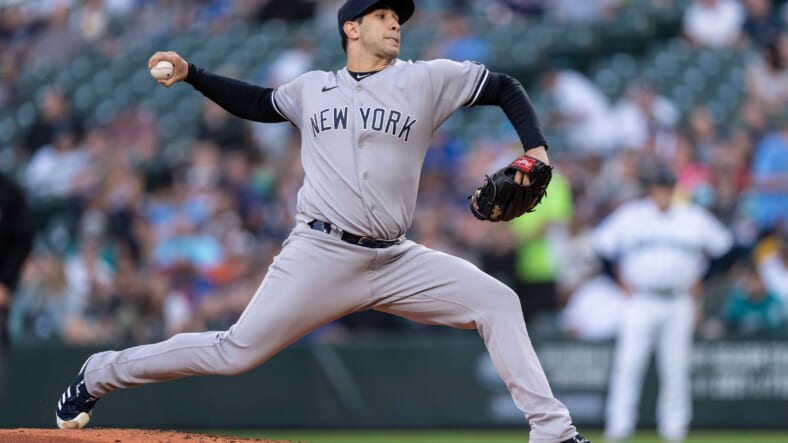 The New York Yankees entered last night’s game with the Tampa Bay Rays with a certain urgency to get a win so they would have a chance to win a series, after losing one to their other rival the Boston Red Sox. Although it was a nail-biter late, the Yankees came away with the 4-3 win.

As he has so many times before, although having early game struggles, Jordan Montgomery kept the Yankees in the game. The Tampa Bay Rays hitters made Monty work hard through the first two innings. He used 51 pitches to get through the two innings. But from then on through the fifth inning, he pretty much breezed through the Rays lineup using 102 pitches. In the end, Monty didn’t give up a run and finally got a run of support.

Montgomery got his first win since June 2nd. Although the Yankee lineup has let down most of their pitchers, Monty has been the poster boy for no run support. He has given up an average of just 1.8 runs per game in his past seven starts while getting absolutely no run support. His command and control seem to be getting better with each start.

After a devasting loss to the Boston Red Sox in the last game of that series, the Yankees needed to get a good start to this Tampa Bay series so they could have a chance to take the series. They did that with a 4-3 win last night. But, make no mistake about it, Monty won that game, not the Yankee lineup. The Yankees did get 10 hits in the game but went 3 for 16 with men in scoring position, leaving 11 Yankees on base. Twice they hit into double plays and lead all of baseball in that stat. The Yankees blew several opportunities to blow the game wide open.

Another concern was the Yankee bullpen

At the start of the season, industry sources said that the New York Yankees had one of the best bullpens in baseball, but in July, that has been disproven. Several relievers had pitiful outings. Last night after Montgomery pitched a solid five innings, the usually efficient Chad Green entered in the sixth inning, gave up two runs, and took 32 pitches to get through one inning. Zack Britton game up another run in the eighth.

In the ninth inning and Montgomery’s win almost blown, Aroldis Chapman came in to pitch the ninth. Although he got the win, it was another nail-biting inning for the pitcher and fans. Chapman has struggled since the end of June, and last night was no different. First, he gave up a walk, and it took him 19 pitches to get out of the inning.

In a puzzling move, the New York Yankee front office announced that they had traded long-time long-haul reliever Luis Cessa to the Cincinnati Reds at the end of last night’s game. Also included in the trade was Justin Wilson, and they got back nothing except a player to be named later.

Cessa has been the go-to long reliever for the last two New York Yankee managers. In his eleven seasons, he has a 55-54 record and an ERA of 3.74, which is very good for a reliever that usually enters the game with runners on base and has to give the team several innings of long relief.

This season has been his best with the Yankees. The 29-year-old is inducing ground balls at a massive 56.8% clip this year. Statcast shows heâ€™s been among the top twenty percent of pitchers in suppressing opponentsâ€™ average exit velocity, hard contact, and barrels. In 38 1/3 innings, this season he has earned a career-best 2.82 ERA.

The only explanation I can come up with to get rid of Cessa involves Justin Wilson, who has not pitched well for the Yankees; he has an ERA of 7.50 in 18 innings of work and a contract that costs the Yankees close to $3 million. This amounts to a Yankees salary dump; unfortunately, the Yankees lose Cessa in the deal. Yankee fans can only hope that the salary dump brings something good to the team later this week.

It must have been quite a shock to Cessa, who has spent his last six years in the majors with the New York Yankees.