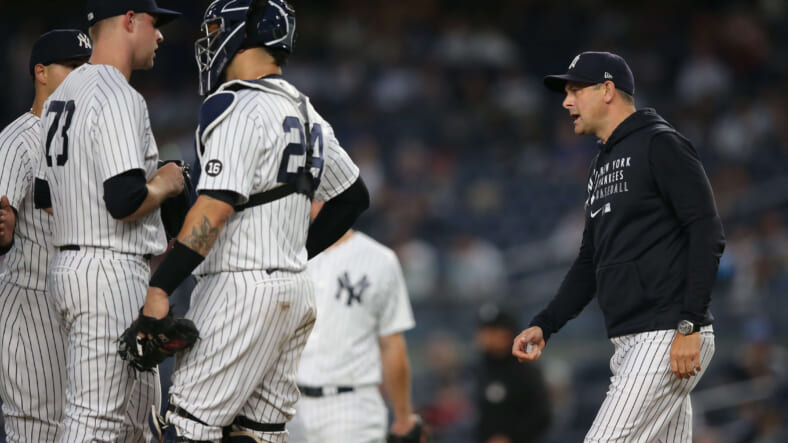 After a disastrous series with the Boston Red Sox that saw the New York Yankees get swept for the second time by their age-old rival, the Yankees were hoping to right the ship last night. They opened a four-game set with the Los Angeles Angels at the Stadium in the Bronx, but that ship kept going in the wrong direction; the Yankees lost their fourth game in a row 5-3.

Michael King has now had 12 starts but hasn’t notched up a win to his name. Last night against the Los Angeles Angels, he used 77 pitches to go 4.1 innings into the game, giving up a homer and two earned runs. The 77 pitches was season-high for King. King is now 0-4 with a 4.06 ERA.

With starter Corey Kluber on the shelf for at least another month, the Yankees called on Deivi Garcia to fill in, but he failed badly. The next option was King being that Clarke Schmidt is also on the IL. Unfortunately, the New York Yankees are out of options, so King will make at least another few starts as General Manager Brian Cashman scours the trade market. King’s primary problem is also his best pitch. King relies on his sinker to get hitters out, but he gets walloped when that sinker fails to sink. As a result, the Yankees have lost 9 of his 12 starts this season.

The Yankees have been plagued all season long by not hitting or not hitting when it counts. Last night was no different. The Yankees could only get six hits on the night and never got a runner into scoring position after the second inning. They were hitless in the eighth inning, and with the game on the line at the bottom of the ninth, they struck out three times.

Two of the three runs scored came from home runs by Gio Urshela and Giancarlo Stanton. For homers to be impactful, there have to be runners on base. This season the Yankee home runs are down, and most are solo shots causing fewer runs to be driven in and ultimately leads to fewer wins. At the beginning of the season, most industry analysts felt the Yankees could get at least 95 wins, with some projecting a 100 game winning season. If the Yankees continue to lose games at the present pace, they will probably win only 80-85 games, and that will not get them into the postseason. The Yankees, three games from the halfway mark, have only 40 wins.

Many New York Yankee fans were at least curious to see this baseball player that has been compared to the likes of Babe Ruth. Shohei Ohtani is a Los Angeles Angel pitcher. What makes him unique, it that he is one of the team’s best hitters as well. If any fans wanted to see just how talented this young 26-year-old Japanese player was, they didn’t have to wait long. Last night in his first at-bat, he homered into the centerfield bleachers for his 26th home run of the season. He has tied for the most home runs with Vlad Guerrero Jr., a pitcher that can hit this well has caused his nickname of “Shotime.” Some call him a freak of nature.

As a pitcher, the young man has a career record of 42-15 with an ERA of 2.52. This year he is 3-1 with an ERA of 2.58. As a hitter, he has a .270 batting average. And get this, he only makes just over $4 million a year; I’d say that’s quite a bargain for the man that just may be the next Babe Ruth. Tonight he will pitch for the Angels facing Domingo German.