New York Yankees: 3 major takeaways from the Yankees’ win over the Tigers 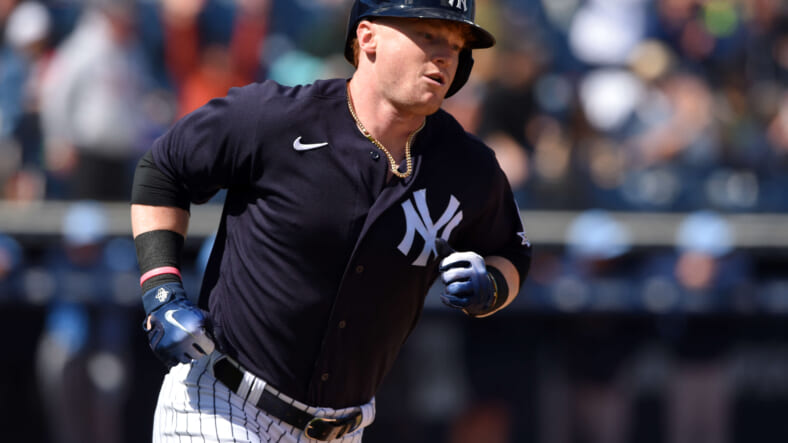 The New York Yankees traveled to Lakeland, Florida, to face the Detroit Tigers. The Yankee’s won their seventh game in a row, beating the Tigers 7-4. Giving them an 11-4 -1 record on the spring training season. Here are three major takeaways from yesterday’s outing.

In an earlier article, I wrote about the best players and the most disappointing ones so far in this spring training. Cole was featured as one of the starts of the disappointing season.

We all know that Gerrit Cole is our New York Yankees ace, and we all expect a 20 game winning season. Short of that, we will be somewhat disappointed. As of his last start, Cole pitching over the qualifying 5 innings has the highest ERA of any starter (4.50). At least at the beginning of the season, one conversation with Cole is who he will be throwing to. In his first game, he struggled with Gary Sanchez catching him. In his second outing, he pitched much better when caught by Kyle Higashioka. Itâ€™s a small sample but worth noting.

Today against the Tigers, he was caught by Michael Brantly. He got out of the first inning unscathed. But in the second inning, he was nailed for two homers. Jacoby Jones and Renato Nunez scored long balls off the Yankee ace. He also walked one in the inning, which gave him 2 walks in his first 6 innings of the spring. At the top of the third inning, Cole only faced three hitters. Nevertheless, Cole giving up back-to-back home runs is concerning. Already with the highest ERA of the starting rotation, he today raised it to 4.70. At this point of the season, Gerrit Cole does not look like the ace he is; that place goes to Domingo German, who has an ERA of .000 in a full nine innings.

The New York Yankees are trying to expand innings for their starters in preparation for the regular season. In doing so, they brought Gerrit Cole out to start his fourth inning. Jonathan Schoop hit a hard double off Cole that dropped just short of Frazier.Â  He struck out the next two hitters bringing his ERA back to 4.70. Although his performance was not horrible, it is not what the Yankees expect from their ace.

Clint Frazier had 3 hits in 3 plate appearances yesterday against the Tigers. One of them a monster homer that traveled 425′, raising his batting average to .304. He drove in three of the seven New York Yankees runs. Frazier over spring training so far has 7 hits in 23 plate appearances, two of them home runs with 5 RBI’s.

After reinventing himself as an elite outfielder and Gold Glove nominee last season, Frazier earned a permanent place in the New York Yankees lineup due to his improved defense and excellent hitting. Frazier is healthy and off to a great start in spring training.

Jonathan Loaisiga shines in the game

Jonathan Loaisiga followed Gerrit Cole in yesterday’s game against the Detroit Tigers. He pitched 2.1 scoreless innings. Loaisiga has now pitched in 8.1 innings without issuing a home run for an ERA of 0.00. He is only second to Domingo German. In the 8.1 innings, he has only given up 2 hits while striking out 7 opponents.

Jonathan Loaisiga is an exciting pitcher. We donâ€™t know if he is a starter or a reliever. He has performed well in both roles. So far, his control is excellent. It is doubtful that the Yankees will add him to the starting rotation, but they will seriously look at him if there are any injuries.

The winning pitcher in the game was Gerrit Cole, and the loser was Michael Fulmer. The final score was New York Yankees 7 and the Detroit Tigers 4.