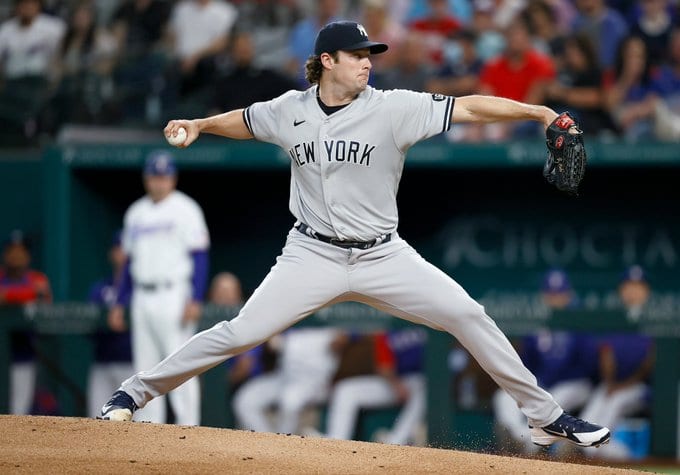 Last night the New York Yankees faced the Texas Rangers at Globe Life Field in game one of a 4 game set. The Yankees lost the game 5-2 for their second loss in a row. The Yankee hitting was subpar, and Yankee ace Gerrit Cole suffered through his worst start of the year after being brilliant most of the season. What makes this loss so embarrassing for both the team and Cole is that it was against one of the worst teams in the AL and against a pitcher (Lyles) who had an ERA hovering at 6.00. Cole also got no help from the Yankees hitters. The on-again-off-again hitting was impotent last night.

The New York Yankee ace Gerrit Cole that is usually dominant, near-perfect, wasn’t last night at Globe Life Park in Arlington, Texas. Much to the surprise of Yankee fans that feel they will win with Cole on the mound, Cole’s lack of control was disappointing, to say the least. It started in the first inning. Fans are used to a 1-2-3 first inning from Cole, but the shock was immediate; he gave up a double to Calhoun to start the game. It was a precursor of what was to come.

In the second inning, Cole gave up three runs. He went into the inning with the Yankee one-run lead. Adolis Garcia led off the bottom by homering to tie up the game at 1 apiece. David Dahl doubled to right-center. Kiner-falefa doubled driving in Dahl for the Rangers early lead. Charlie Culberson ground out. Kiner-Falefa stole third. Jose Trevino singled driving in Kiner-Falefa. Cole gave up another run in the fifth when Calhoun homered off him. At the top of the sixth inning, Garcia singled, and manager Boone had seen enough. Cole took the loss in the game, throwing 89 pitches.

After the game in an interview, Cole gave no excuses for his sub-par performance but suggested that “it was just one of those nights, I wasn’t as crisp.”

Gerrit Cole may not have helped his team win, but he did reach a personal milestone. Cole had struck out 61 batters without walking a batter until Monday night. According to the Elias Sports Bureau and the Athletic, it was the longest such streak in a single season since 1893. When Cole was asked how he felt about the achievement, Cole responded sheepishly that it was pretty cool but wished it had come with a win.

When Cole reached the milestone, he did it apparently without Yankee catcher Kyle Higashioka’s knowledge, because “Higgy” threw the ball into the stands. There is no word as to if the Yankees retrieved the ball.