New York Yankee Profiles: Tyler Wade shows his true worth in Yankee’s push to the postseason 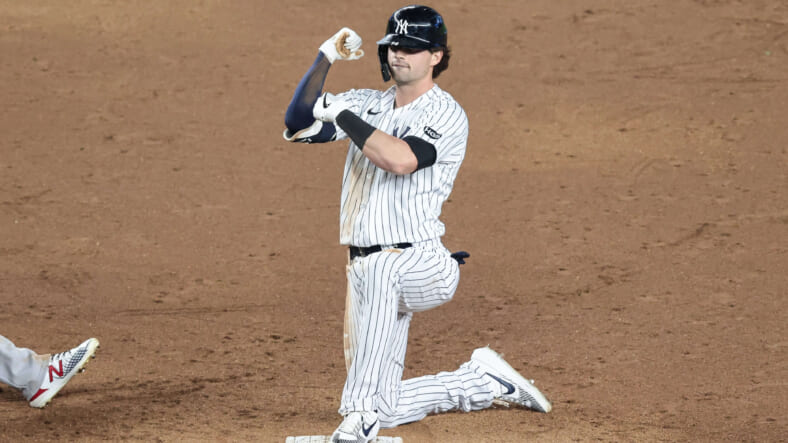 Every year the New York Yankees feel that this will be his breakout year, but Tyler Wade has disappointed.Â  In 2019 he started big on opening day. He probably would have started the season at the alternate sight, but replacing DJ LeMahieu started the season at second base against the Washington Nationals. He had a career day.

He led off the third inning by working the count full against Max Scherzer and taking a cutter out of the zone for a walk. From there, Wade was inside Scherzerâ€™s head. He made three pickoff attempts while facing Aaron Hicks, and then he left a fastball in the middle of the zone for Judge to pull down the line. Wade was able to score from first to give the Yankees a 3-1 lead.

Unfortunately for Wade, he struggled through most of the season. In 88 at-bats, he had only 15 hits for a season batting average of .170, just ahead of the struggling Gary Sanchez. If the New York Yankees can re-sign DJ LeMahieu, the Yankees will not have a lot of need for Wade. The team has kept him mostly for his speed and replacement as a utility player off the bench.

2020 was not a good year for Wade as it wasn’t for many players in the coronavirus season. But if you were told that the following season Wade would have the second-highest batting average on the team for those playing at least 80 games, you would have been told in your wildest dreams. Well, that dream has come true. If there is one player on the team that doesn’t get the credit he deserves it is Tyler Wade.

This writer has always felt that Tyler Wade could be a much better player if given more playing time. This season (2021), he has proved that out. He has played in 80 games so far and has excelled beyond what is his usual skills. Of course, wade’s problem has always been his hitting or lack thereof. But this year gave a chance he is hitting .278, the second-highest batting average on the team, only below Aaron Judge.

But Tyler Wade’s value is far more than that batting average; it’s in the stats that you don’t see. The Yankees have won 34 of their last 45 games. Some of those wins can be attributed to Wade either directly or indirectly. But, wade is so much better than his stats show. His speed, ability to steal bases, quick thinking, and excellent defense in multiple locations make him a complete player.

Like in so many games, Wade is invaluable. Last night not playing in the game; he was called in in the top of the ninth inning to pinch run for Giancarlo Stanton. He stole second and reached third on an errant throw. Aaron Judge singled, and Wade scored the winning run.

Letâ€™s take a look at Wadeâ€™s journey to the Yankees.

The Yankees Tyler Dean Wade was born on November 24, 1994, in San Diego, California. He played baseball as a boy and was a Yankee and Derek Jeter fan from the age of ten. He played ball for Murrieta Valley High School in California, where he developed into a shortstop, who played several times at second base. Yankees scouts took notice of Wade and particularly liked his athleticism. They thought so much of him that they selected him in the fourth round of the 2013 MLB draft when he was just eighteen.

He had committed to play college baseball for San Diego State University but chose to forgo his commitment and sign with the Yankees. He made his pro debut in the rookie Gulf Coast League. At the end of the season, he batted .309 with 12 RBIâ€™s, and the Yankees promoted him to the Staten Island Yankees. In the same year, he also played at the Charleston River Dogs and for the Trenton Thunder. He ended playing in 129 games for an average of .273 with 51 RBIâ€™s.

He started 2015 with the Tampa A team but ended the season back with the Thunder. He played in 127 games between the two teams for an average of .262 with 31 RBIâ€™s and three home runs. He was an invitee to 2016 spring training but spent the season with the Thunder. He began the 2017 season with Scranton Wilkes/Bare but was called up to the Stadium on June 27. He ended up taking the shuttle between the Rail Riders and the Yankees multiple times. He was finally called up for the rest of the season on the 4th of September. He batted .310 for the Rail Riders but .155 for the New York Yankees in just 30 games. During the 2018 season, he was back and forth between the teams again. He played in the Arizona fall league during the winter, where he worked on his outfield skills.

In 2019 he started his season with the Rail Riders but had been up and down again. While at Scranton, Wade has been honing his outfield skills while his natural position is shortstop. As it turns out, Wade is a pretty good utility player, even playing second base, although he isnâ€™t the greatest hitter. He is still young at 26, and still developing. Wade was again called up when the roster expanded and made some exciting catches in left field.

Wade is the super-utility player that can take over if Gleyber Torres falters as the shortstop.Â  He can play at second and in the outfield with better than average fielding percentages. In addition, he can score from first or second on a hit or sac fly with his team-leading speed on the bases.Â  Yankee manager Aaron Boone recently sung the praises of Wade.

â€œTyler can be that really valuable super-utility guy, rule change or not. He has an ability to defend the middle of the diamond, in the infield, and we have seen just how good an outfielder he can be when we have put him in that situation. For him, itâ€™s about continuing to progress offensively and we think he can be a very valuable player for us, he is always (trying to improve) his offensive game, and looking to take advantage of his speed, laying down a bunt, and working on that line-drive swing. Heâ€™s got a pretty good understanding of the strike zone and hopefully, with more reps and opportunities, we can start to see that at this level.â€ That according to manager Aaron Boone.

Wade is not married, and there are no scandals attached to his name. In the offseason, he lives in southern California. He has an older brother Kyle. Tyler attributes his hard-working style to his military father. He became a New York Yankee fan at the age of ten when going on a family trip to Cooperstown; he got to see a Yankee game at the Old Stadium. In that game, he got to see Derek Jeter do his famous jump throw.

When he returned home, he practiced that throw in backyard Whiffle ball games. Wade carries a tattoo behind his left wrist the says, â€œConfidence is keyâ€ For female fans, he is a bit of a heartthrob with his good looks.

The video below shows Tyler Wadeâ€™s speed and agility.