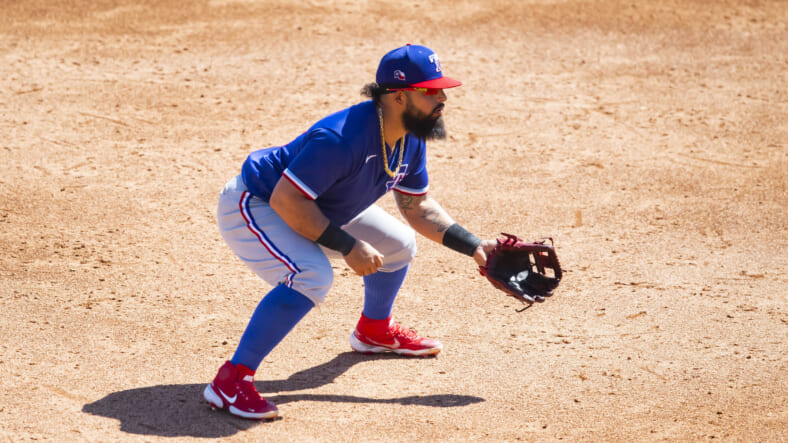 Most New York Yankee fans are not aware that yesterday the Yankees made an intriguing trade. They traded with the Texas Rangers acquiring Rougned Odor. Odor will sit on the bench. To make this possible, the Yankees designated Thairo Estrada for assignment. The Yankees have 10 days to trade Estrada or release him on waivers. The 27-year-old Odor has $27 million left on his contract; most will be paid by the Rangers while the Yankees will pay him the MLB minimum per Jeff Passan of ESPN.

Now the New York Yankees question is what to do with Jay Bruce, Tyler Wade, or do they send Odor to Scanton to start the season. The question for Yankees fans is why Odor. Well, for starters, he is a lefty bat with power that Bruce and Wade don’t exhibit. Odor consistently hits home runs, 30 in 2019 and the equivalent of 26 in the shortened 2020 season. With his lefty power, the short porch at Yankee Stadium looms huge. Odor is a second baseman by trade, so the Yankees will also have to figure out that.

With New York Yankee fans knowing little to nothing about this still young man, let’s find out his origins and what got him to the Bronx. Rougned Roberto Odor was born on February 3, 1994, in Maracaibo, Venezuela.Â  He has been playing baseball since the age of 2. [1]. He previously played for the Texas Rangers from 2014 to 2020. The Rangers traded Odor to the Yankees on April 6, 2021. [2]

After three years in the Texas Rangers, minor league system, the Rangers promoted Odor to the major leagues on May 8, 2014. Odor finished the year hitting a .259 batting average, 39 runs, 14 doubles, 9 home runs, 4 stolen bases, and 48 RBIs in 386 at-bats over 110 games. In 2015 Odor was the opening day second baseman, but he struggled mightily and was demoted but was shortly called back up. He finished the season hitting .261, with 16 home runs, 61 RBIs, and 54 runs scored, but he also led the league in errors.

In 2016 he finished the year with a .271 batting average, 33 home runs. In 2017 he did something few players have ever done; in the season opener against the Cleveland Indians, Odor hit two home runs in his first two at-bats of the season. During the last few years, 2018-20, he had a slash line of .209/.273/.425 with 58 home runs over the span. Other than a relatively low batting average, and even though he hits a lot of home runs, he also strikes out frequently. In acquiring Odor, the Yankees many have seen something that the Rangers haven’t seen and can find a way to fix that.

A lefty bat with power is a dangerous thing for Yankee opponents at Yankee Stadium; hopefully, the Yankees will find a way to use Odor with the best results.

On a personal note, his nickname is “Rougie.” Odor is deeply involved in horses and the sport of toros coleados. His involvement in horses started when he was a child visiting his mother’s family on weekends, who had horses. His long-range plan is to build a horse farm in North Texas and move his entire family from Venezuela.