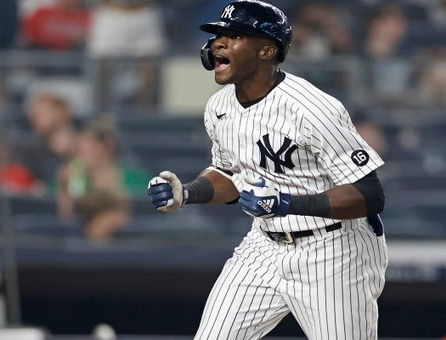 With so many injuries and players on the Covid list, the New York Yankees have caused the Yankees to give several minor league players a shot at playing at Yankee Stadium. Among them were Tim Locastro, Trey Amburgey, Ryan LaMarre, Estevan Florial, and Greg Allen. Allen adds a new dynamic to the team. It’s time we get to know him better.

Allen (Gregory Lomack Allen) is a 28-year old that was born in San Diego, California, on March 15, 1993. He made his Major League debut with the Cleveland Indians in 2017. He also played for the San Diego Padres before coming to the New York Yankees. But, first, let’s look at how he got to the Yankees.

Playing baseball as a child, he developed a love for the game of baseball. He got his first taste of playing with a real team when he attended Hilltop High School in Chula Vista, California. After high school, he played college baseball for the San Diego State Aztecs of San Diego State University. He, just like Aaron Judge, played summer ball in the Cape Cod League with the Orleans Firebirds during the 2013 season.

In the 2014 MLB draft Allen was selected by the Cleveland Indians in the sixth round of the draft. He was sent to the Mahoning Valley Scrappers. That is where he spent the entire season, hitting .244 with 19 RBI’s and an amazing 57 stolen bases. In 2015 he played for the Lake County Captains. In 123 games, he stole another 43 bases while hitting .273 with seven home runs. After the season, the Indians assigned him to the Arizona Fall League. He was reportedly involved in a trade that would have sent him to the Milwaukee Brewers, but that trade fell through.

At the beginning of the 2017 season, Greg Allen found himself with Akron but was quickly promoted to the Major Leagues on September 1. He batted .264 with another 21 stolen bases before the move to the Indians team to begin the season. Six days after joining the team his hit his first home runs. Allen had many firsts in 2018. On May 27th, he hit his first career walk-off home run against the Houston Astros in the 14th inning. Then, on September 23, he got a base hit in the bottom of the 11th inning against the Boston Red Sox, causing a walk-off win for the Indians.

After an unremarkable 2019, on August 31, 2020, the Indians traded Allen to the San Diego Padres in the package that sent Mike Clevinger to the Padres. He played in one game for San Diego before they optioned him to their alternate training site. On December 31, 2020, Allen was designated for assignment by the Padres. Just six days later, he was picked up by the New York Yankees.

On January 6, 2021, the Padres traded Allen to the New York Yankees. On February 23, the Yankees designated him for assignment. On March 1st, he was invited to spring training as a non-roster invitee.Â  After a successful spring training, he was assigned to the Triple-A Scranton/Wilkes-Barre RailRiders to begin the season. This is where the still young man started to make a name for himself with his dynamic play and speed on the bases. Allen got his big chance when he was promoted to Yankees Stadium due to all of the Covid cases. He made his Major League debut with the Yankees on July 16 against the Boston Red Sox. He got a hit in his first at-bat.

Since his promotion to the big team, he has played every game (4) and has gotten a hit in each game. Last night playing in place of Aaron Judge in right field, he got a hit, scored two runs, and walked twice. One must wonder if the Yankees’ recent success has anything to do with the spark Greg Allen has given the Yankees. Allenâ€™s speed again played an integral role in vaulting the Yankees to their third straight victory last night at Yankee Stadium, this one a 6-4 win over the Phillies. One thing is for sure, Allen is going to try to continue to impress so he will get even more at-bats and make a case for him to remain on the roster.

â€œI just try to do what I can to make an impact and help the team win,â€ Allen said.