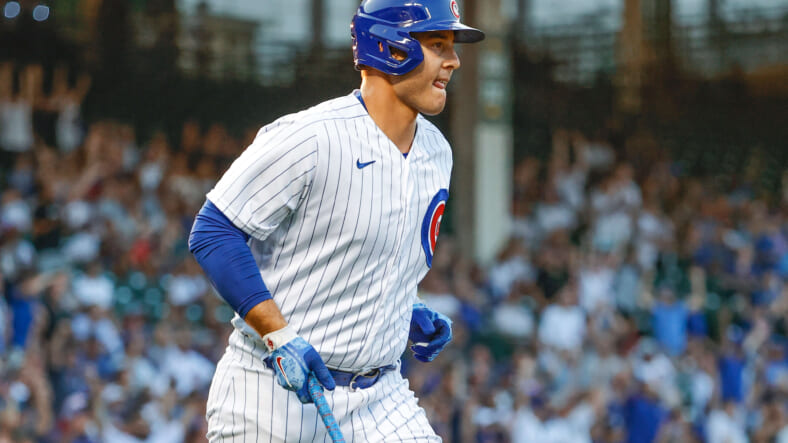 The New York Yankees were very successful by the trade deadline, picking up three pitchers and two high-impact lefty hitters to add to the Yankees lineup; one of those hitters is Anthony Rizzo who came to us in a trade with the Chicago Cubs. Rizzo has spent his entire major league career with the Cubs, where he was one of the most beloved players on the team. He played a big part in the Cub’s first World Series win in 107 years. The eleven-year veteran player has a 36.8 WAR with 244 home runs and a career batting average of .269. Last night in his Yankee debut, he walked, had two hits, and hit his 15th home run of the season.

Now that Rizzo is with the New York Yankees, it’s time for Yankee fans to get to know their new first baseman. Anthony Vincent Rizzo will turn 32 next week. He is a native of Parkland, Florida, and attended the same school, Marjory Stoneman Douglas High School, where the mass shooting was in 2018. He was selected in the sixth round of the 2007 draft by the Boston Red Sox. Rizzoâ€™s minor league career started at 17 in 2007 in the rookie class with the Gulf Coast League Red Sox. He was an immediate success.

During the winter of 2012, because of his excellent play, he was scheduled to be the Padres starting first baseman, but the Padres acquired Yonder Alonso, who ended up getting the job. Shortly thereafter, Rizzo was traded to the Chicago Cubs.

Rizzo started the 2012 season with the Triple-A Iowa Cubs. His results with the Cubs were the same as with the Padres.Â  He batted .342 with 23 home runs and 62 RBIs. The Cubs promoted him to the big team, where it was hoped he could help the teams’ struggling offense. He became the first player in Cubs history to have three game-winning RBIs in his first five games. In July, he was named Rookie of the month. He ended his first season with the Cubs with a .285 batting average and 15 home runs.

In 2013 Rizzo cemented himself as a great player and fan favorite. Fans learned that not only was he a good player but a really nice person. In 2014 he earned his first All-Star game and came in 10th in the MVP voting. He would be an All-Star for the next three years and an MVP candidate for the next five years. He was also a Silver Slugger and a four-time Gold Glover. In 2016 he helped the Chicago Cubs win their first World Series in over 107 years, the longest World Series drought in baseball history.

He was an integral part of the last three victories over the Los Angeles Dodgers. He led the team to their first World Series appearance since 1945. He would have 5 RBIs in the World Series and would score 7 runs that lead the Chicago Cubs to their first World Series win since 1908. That year he would also win the Esurance MLB Award for the best media personality. He also won the defensive award saving 11 runs for the Cubs, and led all first baseman getting him his first Fielding Bible Award. He was also nominated for the Roberto Clemente Award. He also got his third MLBPAA Cubs Heart and Hustle Award.

On September 2, 2017, Rizzo became the fourth Cubs player to hit at least 30 home runs, 30 doubles, and 100 RBIs in three or more seasons. For the season, he batted .273/.392/.507 with 32 home runs and 109 RBIs. Unfortunately, he also led the major leagues getting bonked 24 times. On October 27, Rizzo was named the 2017 recipient of the Roberto Clemente Award for his charity’s work to find a cure for childhood cancer. Of winning the award, Rizzo said, “This is amazing. The greatest award you can win. It will go front and center in front of anything I’ve ever done.” In 2018 he had another 101 RBIs. In 2019 he had the highest batting average of his career (.293) with 27 home runs.

The shortened 2020 season was a disappointing season for Rizzo, as it was for many players. He hit only .222 on the season. But he still got the equivalent of 23 home runs and earned his fourth Gold Glove Award at first base.Â  This season he has bounced back with 14 home runs for the Cubs and a batting average of .248. Earlier in the season, the Cubs offered Rizzo a five-year $70 million extension which he refused.

With the extension refusal and becoming a free agent in 2022, the Chicago Cubs made the difficult decision to let loose of their long-time favorite player and trade him to the New York Yankees. Anthony Rizzo is probably not the player he was in his prime, but he could help the Yankees to their first World Series since 2009. The Cubs were so appreciative of Rizzos’ time with the Cub, and for the man he is, they produced a short video honoring and thanking him.