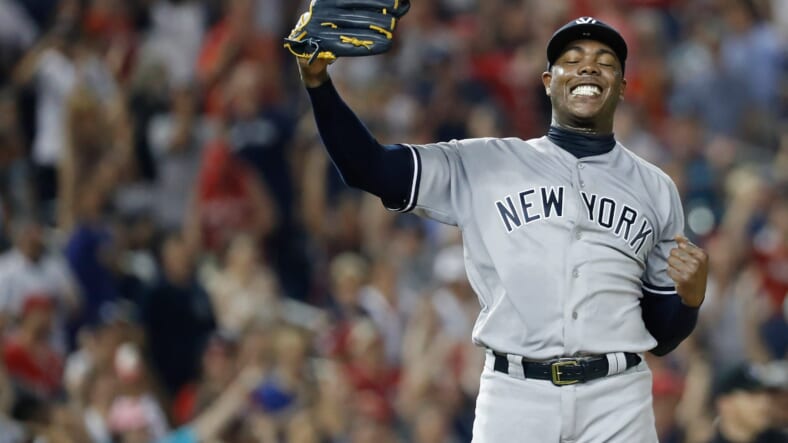 The New York Yankees closer is Aroldis Chapman. As pitchers age, they evolve, or they are not as effective as they once were for starting pitchers and relievers alike. This is particularly true of flame throwers. They lose velocity on their fastball. Chapman is known as the â€œCuban Missle,â€ is hardly deteriorating, but he wonâ€™t be throwing many 100 mph plus fastballs for much longer. His answer to that reviving a pitch that he used as a starter.

I first reported during spring training that Chapman was taking up the mantle of the evolving closer. Resurrecting his splitter has had very encouraging results. Chapman has pitched six innings so far this regular season, he has struck out 16 of 18 possibles. He has two or more strikeouts per inning in his last 16 games. With now having 3 pitches in his arsenal, he may become more Mo-like. Don’t get me wrong, the two are/were very different pitchers and there will probably never be another pitcher like Mariano Rivera. The biggest difference between the two is when Mo took the mound the game was over. Yankee fans have never had that confidence in “Chappy.”

This year he may earn that confidence. If early on is any indication, this new third pitch may keep hitters off-balance and unsure of what pitch is coming their way. In six games he has shut down 5 hitters with his splitter. Another encouraging sign for Chapman is that after two years of his declining fastball, it’s right back up there hovering at 100 mph this season. Manager Aaron Boone has called theÂ  new splitter “gross.” Pitching coach Matt Blake had this to say:

â€œI think heâ€™s becoming a more complete pitcher while also still retaining some of those elite qualities heâ€™s had in the past,â€ Blake said. â€œItâ€™s been really impressive to watch so far, and hopefully we can we just continue to see more of it.â€

Chapman is quite happy with the results so far, using the new pitch and is enjoying the reaction of hitters when they don’t know whats coming.

Letâ€™s start at the beginning and how he evolved and became a New York Yankee. Chapman was born Albertin Aroldis Chapman de la Cruz in Holguin province, Cuba, on February 28, 1988. Although he is called the â€œCuban Flamethrower or Missle, he is actually of Jamaican descent. His grandparents emigrated to Cuba for a better education. As a child, he played ball with other kids in his neighborhood. At the age of 15, a friend invited him to join the local Hoguin baseball team.

Even at that young age, local coaches noticed that the young boy had the potential to be a pitcher. So in 2003, he switched from first base to the pitcherâ€™s mound.Â  In 2006 he joined the Cuban National Series League playing for the Holguin Sabuesos. He compiled a 24-19 record as a starter in 327 innings. His ERA of 3.74 with 365 strikeouts. He did make eleven relief appearances.

Chapman wanted out of Cuban and tried to defect but failed. Being a significant star, he met with Castro in 2008. Castro gave him a conditional reprieve but suspended him from the remainder of the season and kept him off the summer Olympics national team. He did allow him to return in 2009 to the World Baseball Classics representing Cuba. Still determined to defect, when playing in Rotterdam, the Netherlands in the World Port Tournament he did it. One morning he walked out the door of his hotel, not to be seen again until he took up residency in Andora in the Pyrenees.

While in Andora, he petitioned MLB for free agency, which was granted. In January of 2010, Chapman signed a six-year contract to play for the Cincinnati Reds. On August 31 of that year, he made his Major League debut striking out the side with just nine pitches. In 2011 he was solely a reliever and in 2012 named the teamâ€™s closer. In 2014 he was hit in the head by a comebacker and underwent surgery to fix a skull fracture above his left eye. A metal plate was inserted into his head to stabilize the fracture.

For the 2015 season, Chapman had the highest average pitching speed in baseball at 100 mph. His record was 4-4 with a tiny ERA of 1.63 and 33 saves on the season. After the season, the Reds traded Chapman to the New York Yankees for four Yankee prospects. Before spring training, the then-manager Joe Girardi named Chapman the new Yankee closer.

Chapman didnâ€™t start out well for the Yankees; he was suspended for the first 30 games of the season due to an off-season personal conduct policy violation related to domestic violence. In July, he was traded to the Chicago Cubs, which brought Gleyber Torres, Adam Warren, and Billy McKinney to the Yankees. The Cubs were going to the postseason, and the Yankees werenâ€™t. With the Cubs, he had his fastest recorded pitch at 105.1 mph. In the last inning of the last game of the World Series, Chapman went into a game-winning 10th inning and his first World Series win.

As a free agent, the New York Yankees wanted him back, and he signed a record for a reliever an $86 million contract. His four-seam fastball had the highest average speed of any MLB pitcherâ€™s pitches in 2017, at 99.7 mph, but a reduction from 2015. In 2018 he had a 104.1 mph pitch. Chapman has been successful for the Yankees. His record is 14-6 over five years with an ERA of 2.54. But no matter how successful, he has failed the Yankees at key times in the postseason. Most recently when Mike Brosseau homered off him, causing the Yankees to exit the 2020 postseason.

Chapman realizes that his four-seam fastball is losing some velocity and is adding a new old pitch to his arsenal. Last year Chapman recorded an average of 98.7 mph, the lowest average speed for his fastball. I say new old because he used the pitch many years ago when he was a starter in Cuba. Chapman, when speaking with The Athletic, had this to say about his pitching?

â€œIâ€™m not 25 anymore,â€ Chapman said. â€œIâ€™m older, Iâ€™m not throwing 105 miles per hour every day. Thatâ€™s the reality. Believe it or not, I used to throw a splitter back in Cuba when I was a starter,â€ Chapman told The AthleticÂ recently through a translator. â€œIt was a pitch that I had used way back, then later on when I came to MLB and I started pitching, they basically told me to not use the splitter anymore. That being said, it has always been a pitch that I felt comfortable throwing â€” in fact I feel more comfortable throwing a splitter than a changeup.â€

Chapman started using the spitter late last season and has refined it over this offseason. Hopefully, the addition of another pitch will make him an even more effective closer. Like many Yankees players, Chapman is relatively private about his personal life. We do know he has one daughter, Ashanti Brianna, with Mendosa Santiestelas. He had a son named Atticus in 2014. Chapman is now 34 years old.