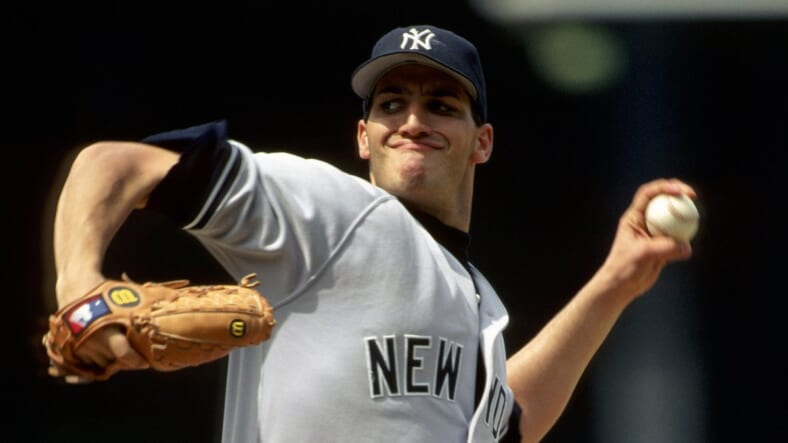 The New York Yankees have had some of the best pitchers to ever play the game of baseball, but no starting pitcher has been more successful in the postseason. Andy Pettitte is the gameâ€™s all-time leader in playoff wins (19), innings (276 2/3) and starts (44) and he ranks fourth in strikeouts behind Clayton Kershaw, Justin Verlander and John Smoltz.

Not many of those innings were wasted: Pettitte won at least two postseason starts for the Yankeesâ€™ 1996 and 1998-2000 champions. His finest hour might have come in 2009, when, he started a game with only three days rest during the playoffs. He was 37, The Yankees won four of his five starts as he went 4-0 with a 3.52 ERA, a crucial piece of the Yankeesâ€™ only championship since 2000.

Now in his third try he is again listed on the 2022 Hall of Fame ballot. If he is judged solely on his performance as a pitcher he will be a shoe in, but if his ties to performance-enhancing drugs, including an admission of unauthorized use of human growth hormone is considered his induction becomes far more complicated. Unlike many in the steroid era, Pettitte admitted that he unknowingly used a growth hormone. He apologized to the Yankees, his teammates and his fans.

Let’s take a look at how one of the Yankee fan favorites got himself onto the ballot.

The Italian and Cajun Pettitte was born in Louisiana but moved to Texas when in the 3rd grade. In Deer Park, as a teen, he played for his high school where he pitched. The multi-talented Andy also played football while there. In 1990 he was selected by the Yankees in the draft at that age of 18, but decided to play college ball. In 1991 he did sign with the Yankees and the rest is history.

Andy in the minor leagues

From 1991 to 1994, the young Andy played for the New York Yankees in the minor leagues. Andy threw a knuckleball, but when he teamed up with Jorge Posada, in the New York Penn League, Posada couldnâ€™t catch the ball so Andy stopped throwing it. In 1992 Andy and Jorge would first meet up with fellow player Derek Jeter. That year Pettitte would go 10-4 with a 2.20 ERA playing for the Greensboro Hornets. In 1993 he pitched for the Carolina League to a record of 11-9. In 1994 he pitched for the triple-A Columbus Clippers, he went 7-2 with an ERA of 2.98 and was named the minor league pitcher of the year.

During spring training in 1995, Andy competed with Sterling Hitchcock for a place in the starting rotation, but failed and found himself in the bullpen to start the year. He made his major league debut in April but two weeks later was sent back down to the minors so he could continue starting games. That was short-lived because of injuries at the Stadium, he was called up just ten days later as a starter. He recorded his first win on June 7th. He performed well enough that the Yankee kept him as a starter. In that year he won seven of his last eight games of the season going 12-7 on the season.

At the beginning of the 1996 season, Pettitte really showed his worth going 13-4 before the All-Star break. He was named to the All-Star team but did not play. He finished the season winning 21 games for the best in league record. In the ALCS, Andy would win both of his games against the Orioles. In the World Series that year, he would lose the first game against the Braves but would win game 5 against John Smoltz, and the Yanks would go on to win the World Series their first time in eighteen years.

Andy the pick off artist

Andy looking beneath the brim of his cap, was a pickoff artist. In 1997 he led the league in pickoffs with 14 and induced 36 double plays. The Yankees were defeated by the Indians in the ALCS, and their hope for back to back World Series wins. In 1998 the Yankees would go on to win the World Series again when Andy started in Game Four, defeating Kevin Brown of the Padres in the deciding game of the series. The Yankees again won the World Series in 1999 and three-peated in 2000 when Pettitte went 19-9 with three complete games. It would be the last World Series win during Pettitteâ€™s first stint with the Yankees.

Andy leaves us for the Astros

At the end of the 2003 season, Pettitte cited that he wanted to spend more time at home with his young children before they grew older. He signed a 3-year contract with the Houston Astros. While with the Astros, Andy would help the Astros get to their first-ever World Series in their history. Back then, the Astros were in the National League, they faced the Chicago White Sox in the series but were swept in four games.

After the 2006 season, Andy again signed with the Yankees after refusing the Astros offer. In the season he started the most games in baseball with 34 starts and a record of 15-9. 2008 was the first year in Andyâ€™s career that he didnâ€™t have a winning season going only 14-14.

In 2009 Andy and CC Sabathia led the Yankees to its first World Series since 2000. Andy was 14-8 that year, and in the postseason he became the winningest pitcher in postseason history when he won all four of his postseason starts. He won game 3 of the World Series, and on four days rest won the deciding game 6 against the Philadelphia Phillies. He drove in his first postseason home run in game 3 at Philadelphia. In 2010 Andyâ€™s record was 11-3, and he reached his lowest ERA since 2005. But at the end of the season, he decided to retire.

In 2012 The New York Yankees begged Andy to return to the fold and pitch yet again for the Yankees. He agreed, which was probably a mistake on his part. His pitching was not stellar going 5-4 in 2012 and 11-11 in 2013, showing Andyâ€™s decision to retire in 2010 to be the right decision for him. Andy Pettitte will go down in Yankee history as the winning-est postseason pitcher of the modern era. Andy, with his number 47 already retired, will always be a favorite player for the Yankees, as shown by the huge ovation he got when he returned for his first Old Timerâ€™s Day in 2018.

Andy apologizes to his fans

On Monday, February 18, 2008, the New York Yankees and pitcher Andy Pettitte held a press conference regarding Pettitteâ€™s given testimony on the topics of performance-enhancing drug use, Roger Clemens, Brian McNamee and his use of human growth hormone.Â  With Yankee brass and other players in attendance, Pettitte apologized for his use of an H.G.H.

He asked for the fansâ€™ forgiveness, the Yankee fans as well as the Astros fans.

He also apologized to his fellow New York Yankee players, family, his father, and especially to young children that may have looked up to him as a role model.

Andyâ€™s awards and his life today

The one thing missing in Andyâ€™s career is the Cy Young award although he came close several times. Andy does have many other awards including the Warren Spahn Award and an MVP award. Although Andy is no longer a New York Yankee he remains involved in the game both as a coach and is a special advisor to General Manager Brian Cashman working in the front office.

As a baseball dad, in 2018, he became a pitching coach for the high school team whose head coach is former Astros teammate Lance Berkman. Andyâ€™s sons Jared and Josh are both pitchers too: Jared for the University of Houston and Josh at Rice University. Andy is no stranger as he shows up at Yankee Stadium for most celebrations. Andy lives in Texas with his wife Laura and their four children. Thank you, Andy, youâ€™re the best, we could have used a little of you in this postseason.

EmpireSportsMedia.comâ€™s Columnist William Parlee is a member of the Society for American Baseball Research. Follow me on Twitter