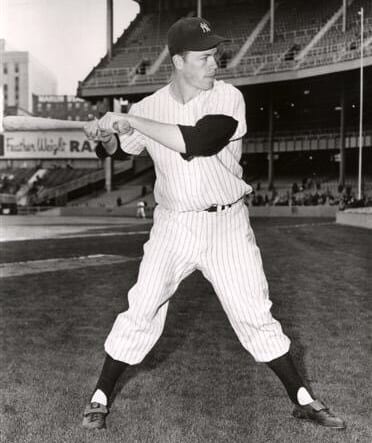 When you think of the New York Yankee teams of the 1950’s you think of Yogi Berra, Mikey Mantle, Whitey Ford, and the like, but many don’t remember Gil McDougald and the fact that he was the glue that held those teams together, especially in the infield where he played second short and third base. He was quiet, religious, charitable long before most baseball players were. He was loved by the fans and his teammates and was, above all highly competitive.

His name will always be tied to the Indians pitcher Herb Score’s death spiral through no fault of his own. McDougald hit a line drive that would hit score, a tremendous pitching prospect. The ball struck him directly in the right eye and then caromed to third baseman Al Smith, who made the play to first. By then, McDougald was no longer running, having veered off the base path to join those gathered around Score, crumpled on the mound, his glove covering a bloodied face.

Removed to a Cleveland hospital, Score had numerous facial bone fractures, and the sight of his right eye was in jeopardy. McDougald was not to be consoled. He would later learn that Score would never fully recover and would be demoted to the minors.
Gilbert James McDougald was born in San Francisco on May 19, 1928. This six-foot-one, the skinny kid went to Commerce High School in San Francisco. He was an All-American basketball player there. He didn’t play baseball until his senior year. When attending college after graduating high school in 1946, he would play semi-pro ball with the Bayside Braves. Gil would develop a very strange stance in the hitter’s box. He would stand with legs splayed open to the pitcher and the bat cocked at waist level. This odd stance turned off most baseball scouts. However, Gil impressed Yankees West Coast scout Joe Devine. He saw something in the young Gil and signed him to a $200 a month contract with the Yankees.

Gil would speed through the minors in 1948 and advance to the majors in 1951. McDougald played his first major league game on April 20, 1951. A few days later, he would have the major league record for batting in 6 runners in one inning. He further cemented his popularity by being the first rookie to hit a grand slam in a World Series. This would be the beginning of a 10-year career, spent entirely with the New York Yankees.

During the 1951 season, Billy Martin, Bobby Brown, and Jerry Coleman had all been called into the Korean War. McDougald basically held the team together by being the ultimate utility player, playing all infield positions. Manager Casey Stengel loved Gil as he could use him anywhere necessary. Casey would say of his hitting style, “Maybe McDougald does hold the bat cockeyed, but there ain’t anything wrong with the way he swings it.”

However, with players returning from the military, Gil would spend a lot of time on the bench. Nonetheless, he was an All-Star, MVP candidate and would win Rookie of the Year. The next year Gil’s salary would be doubled to $12,000. He and his family would move to New Jersey, where they would spend the rest of their lives.

In 1952 he would again be an All-Star and further endear himself with fans as in Game One of the World Series he would homer as the Yanks bested the Brooklyn Dodgers in seven games for another World Series crown. 1953 was no different he batted .285, with a career-best 83 RBIs, and the Yankees would go on to beat the Brooklyn Dodgers again in World Series that would include two homers by McDougald. All this at the same time that he was being an outstanding second baseman.

But the best was yet to come for the 25-year-old baseball star. But at the same time, he knew his playing days would last forever, and with the Yankee’s permission, he and a friend would found the Yankees Building Maintenance Company. The enterprise would flourish and provide the McDougald family a reliable income for the next 30 years.

At the beginning of the 57 seasons, the Herb Score hitting incident would happen when Gil hit the pitcher with a line drive that nearly killed him but did ruin his career, something Gil would carry with him for the rest of his life. In 1958 would be named the Yankee’s most popular player by the CYO of the Archdiocese of New York. He was also the recipient of the Lou Gehrig Award, the first Yankees player ever to receive the prestigious honor.

Although McDougald was relatively young, he began to realize his baseball days might be coming to an end. He hit .250 in 1958 and .251 in 1959. During 1960 the next batch of Yankee stars would be found on the field, Clete Boyer and Bobby Richardson, and Gil’s time on the field would be reduced. McDougald, sensing he might be traded informed the Yankees that 1960 might be his last year in baseball. He loved metro New York and didn’t want to leave the area where he had prepared for his retirement. The 1960 season was dominated by the Mantle Maris phenomenon.

In the 1960 World Series, Gil would play in every game but one. In game seven with Gil at third base, Pirates Bill Mazeroski’s famous drive over the left-field wall brought the Series to an end and also the end of Gil’s baseball career.
During his 10 year career, he would be one of the impactful players that led to the Yankees’ successes. He compiled more than respectable stats: a .276 batting average, with 112 homers and 576 RBIs. More important had been his defensive versatility.

He would be one of Casey Stengel’s favorite players. After his playing days, he would become head baseball coach at Fordham University, but in 1976 he would resign due to his increasing hearing loss. He would have a Cochlear implant to improve his hearing. He and his wife adopted unwanted children and did charitable work with impoverished youth. Gil would pass away from prostate cancer on November 28, 2010.

. He was 82 and was survived by wife Lucy, seven children, 14 grandchildren, and seven great-grandchildren. He would be remembered as the glue that held the teams of the 50s together. He was a great baseball player, but all that knew him recognized him as an even better human being. Gil McDougald was a cross between today’s Gleyber Torres and DJ LaMahieu.