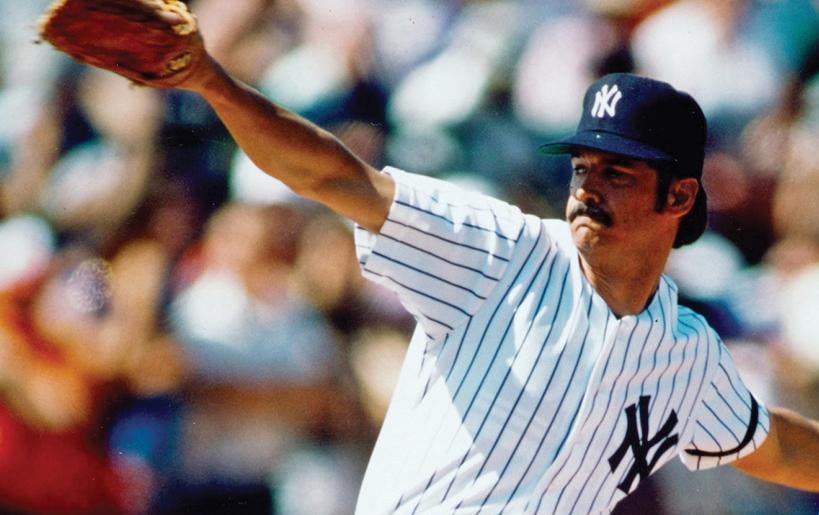 A third of the way through the New York Yankee 2021 season, there have been some notable changes this season. Pitchers are pitching better, and hitters are hitting less, sparking debates of what should be done about it. This season the New York Yankees have had the most significant revamping of their pitching rotation for the first time since 2009. Through the years, the Yankees have had some of the best pitchers in the game. Today we look at one of those, Ron Guidry.

The New York Yankees’ Ron Guidry was born in Lafayette, Louisiana, on August 28, 1950; Ronald Ames Guidry spent his entire fourteen-year pitching career with the New York Yankees. This short for a pitcher, â€œthis skinny kid was the fiercest competitor I have ever played with. He has more heart and more determination than anyone I have ever known,â€Â  was said by former teammate Willie Randolph.

Guidryâ€™s family is Cajun through and through. Ron Guidry grew up hunting and fishing on the bayous, as well as speaking Cajun French. One day, at the age of eight, Ron told his mother that he would visit his grandmother but instead took a detour by a park where some boys played baseball. When a ball got away and rolled towards Guidry, he threw it back with such velocity that a man watching ran over to Guidry. The man was a coach of a Little League team and happened to be a friend of Roland Guidry Ronâ€™s Father. However, Ron did not need too much convincing and joined his first organized baseball team at eight. Like many players who showed plenty of ability, Guidry excelled and then graduated to American Legion baseball.

In high school, Guidry would excel in two sports, baseball and track and field. He showed great promise as a pitcher, but it was sprinting that Ron was most noticed for. Although he was awarded scholarships for track, he chooses a baseball scholarship close to home at the University of Southwestern Louisiana. In his freshman year, he posted a 5-1 record with a 1.57 ERA. The next season he was 7-4, striking out 87 batters in 80 innings. Already he was recorded as throwing up to 95 miles per hour.

After Guidry was with the Yankees for four years, he hadnâ€™t made a name for himself. He struck out a lot of batters, but he also walked a lot of them. In 1974 he was transferred to the West Haven, Connecticut Yankees and made a reliever. This was a big mistake because the results were horrible. He went 2-4 with an ERA close to 6. In 1974 he was sent to Syracuse, where good pitchers surrounded him for the first time. Pitchers like Tippy Martinez, Scott McGregor, and Jim Beatie all showed him the ropes. The club manager at the time was Bobby Cox, who Guidry greatly admired. He would make Guidry his closer, and Guidry racked up 14 saves in that role to go with a 6-5 record and a 2.90 ERA in 42 games.

He then earned a ticket to the Queens Shea Stadium as Yankee Stadium was being renovated. Guidry made his major league debut on July 27, 1975, in the second game of a doubleheader against Boston.Â  While there, he met up with teammates Sparky Lyle and Dick Tidrow. Tidrow gave Ron his nickname â€œGatorâ€. Sparky Lyle gave him something else, his slider pitch, and Ron became a two-pitch pitcher combined with his high-velocity fastball. Soon after, when the Yankees acquired Doc Ellis, Guidry was sent back to Syracuse, where he pitched very well. In 11 games, he posted a 3-1 record with a 1.37 ERA, fanning 25 batters in 20 innings.

The Yankees traded away a pitcher, and Guidry would be called back up to replace him. New manager Billy Martin put him in a game on his first day back. Just off the bus. Guidry would later say Billy Martin didnâ€™t like me and was setting me up for failure. It worked; I got one out and gave up four runs. Both Martin and Steinbrenner wanted more experienced pitchers, so Ron sat in the bullpen for 47 games. At one point, George Steinbrenner, the â€œboss,â€ would tell him you will never make a pitcher in the majors.

In 1977 both the â€œbossâ€ and manager Billy Martin wanted to trade Guidry to the White Sox, but President Gabe Paul would have no part. 1977 also saw new players Reggie Jackson and Don Gullet. In 25 starts and six relief appearances, Guidry posted a 16-7 record with a 2.82 ERA. He threw a two-hitter against Texas on August 28. All of a sudden, Billy Martin liked Guidry and took credit for his new fame. The Yankees went 100-62 and won the east over the Baltimore Orioles. In the ALCS, Guidry pitched a complete-game win over the Kansas City Royals, but he was knocked out in game 5. In the 77 World Series, he got only one start, and he won a complete game for the Yankees.

In 1978 it would be Guidryâ€™s best year; he would win 25 games while losing only three, the last Yankee pitcher to have a record that good to date. In 1978, the east title would come down to a playoff game for the title. In a now-famous conversation, Ron met George Steinbrenner in the parking lot and noticed he looked dejected. Ron asked why, and George said, because we have to go up there to Fenway and play those sons of bitches. Ron answered, â€œdonâ€™t worry, boss. Iâ€™ll win it for usâ€. And indeed he did; he pitched 6 1/3 innings for the win of the division. Guidry would pitch one game against the Royals in the ALCS and one in the World Series against the Dodgers; he won both games. The Yankees would win the World Series for the last time in the next eighteen years.

On August 23, 2003, Guidryâ€™s number 49 was retired by the Yankees. He was the 16th player to be so honored. In addition, he was presented with a plaque that would be placed in Monument Park of Yankee Stadium. When he was asked to speak at the ceremony, he said:

In his career, Ron Guidry won five Gold Glove Awards, the Roberto Clemente Award, Sporting News Pitcher of the Year Award, Sporting News Major League Player of the Year Award, Baseball Digest, and Associated Press Player of the Year Awards, and in 1978 the Cy Young Award. Unfortunately, Ron never achieved entry into the Baseball Hall of Fame, to date, as many voters thought his career was too short, although he was one of the greatest pitchers of the late â€™70s and â€™80s. Reggie Jackson may have had a candy bar named after him, but Guidry had the “Lousiana Lightning Hot Sauce.” In the last 60 years, no other pitcher has had 25 wins in a season, and his 18 strikeouts in a game remains a New York Yankee record.