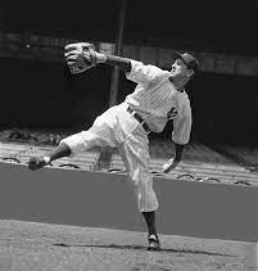 The New York Yankees have had a bevy of great pitchers over their illustrious history. Louis Gomez is seldom talked about, mainly because he pitched so long ago for the Yankees. Today we take a look at his life and becoming one of the Yankees’ greatest pitchers. He had seven starts in World Series games and never lost a game. He pitched the Yankees to seven pennants and six World Championships.

Vernon Louis “Lefty” Gomez was born on November 26, 1908, the youngest of eight children, at his family’s homestead in Rodeo, California, northeast of San Francisco. His father was of Spanish-Portuguese descent, grew up a cowboy, and was known as Coyote his entire life. His mother, Lizzie Herring, was a sixth-generation American of Welsh-Irish descent. Coyote managed a 1,000-acre ranch in Franklin Canyon, so Lefty and his brothers rode horses and became hired hands almost as soon as they could walk. Lizzie owned fifteen dairy cows, and as a result, Lefty and his siblings would be up at 4:00 am to milk the cows and clean out the stalls before heading to school.

When he was only six years old, Lefty attended the San Francisco World’s Fair and watched famous pilot Lincoln Beachey crash into the bay while attempting a stunt. Not deterred, that day began a love of aviation that lasted the rest of his life. He once stopped a major league game to watch a plane flying above. When he was eight, Lefty attended a 4th of July parade in Rodeo and began another lifelong love, that of the saxophone. His brother Earl surprised him with his first saxophone on his ninth birthday, prompting Lefty to take a job plucking chickens at local butchers to raise the $8.00 a month for lessons. The other great love was playing sandlot baseball for the Rodeo town team when he was only 13. He was such a talent that by age 14, in 1923, he pitched throughout central California.

Gomez was tall but very skinny and only weighed 125pds, so when he would try out for the semi-pro teams, he was always told to come back when he fattened up. Lefty attended Richmond High School, a train ride west from Rodeo, because the local high school did not have a baseball team. Gomez was offered a scholarship at St. Mary’s College, a small school five miles east of Oakland, during his senior year. His father was adamant that Lefty should give up baseball go to college. Defying his father in August, Lefty secretly pitched for the Point Reyes semi-pro team in Sonoma County. After Lefty lost a 2-1 game against arch-rival Novato in the final game of the 1927 season, Nick Williams of the Seals finally relented and signed the young flame-thrower to a professional contract.

Lefty compiled an 18-11 won-loss record in 267 innings for the year and led the offense-minded Pacific Coast League with a 3.44 earned run average. The Yankees offered $35k for the rights to Lefty but neglected, however, to advance Lefty’s train fare to spring training across the country in St. Petersburg, Florida, Gomez had to get a job and save up for the trip. First, however, he was ordered by Jacob Ruppert of the Yankees to spend the month of January at a health farm in Saratoga, California, to gain weight. It turned out to be the first of three consecutive Yankee-mandated off-season stays there.

Gomez finally reported to the Yankees in St. Petersburg in March 1930, he was just 21 years old. He was a full 6 feet 2 ½ inches tall and tipped the scales at 147. Manager Bob Shawkey told him to pitch batting practice. As it happened, the first batter he faced was none other than Babe Ruth. He immediately showed promise with his high leg kick and a blazing fastball.

To say that Gomez quickly embraced all that New York City had to offer would be an understatement. Although his personality never changed, he quickly became a sharp dresser and a lover of the Big Apple’s nightlife, though just a little over a year removed from arriving in St. Petersburg with a cardboard suitcase. On a Sunday night in June 1931, he attended a nightclub show at the Woodmansten Inn in the Bronx and immediately became smitten with June O’Dea, a stunning brunette who had just landed a lead role in the Broadway musical “You said it.” He would later marry the beauty.

Gomez, after a failed season in 1930, became the Yankees’ best pitcher. In 1931 he would go 21-9. In 1932 he would go 24-7. His flame-throwing fastball would see him have 9 winning seasons in a row. In 1934 he had his greatest success with a 26-5 run. Twenty-five complete games, six shutouts, and 158 strikeouts in 281 innings to lead the league in each category. Gomez, however, was a very weak hitter and hit just .131 in his best year. Gomez was by now known as a big-game pitcher and a fierce competitor, in spite of his easygoing demeanor, his joking, and whimsical storytelling. Much of his humor was self-deprecating, probably to set off opponents.

Gomez’s two-year contract for $20,000 per year expired at the end of 1936. In spite of the Yankees’ World Series victory, Yankee owner Jacob Ruppert attempted to cut Lefty’s salary to $7,500, complaining that Lou Gehrig’s and his barnstorming in Japan after 1934 had cost the team the 1935 pennant. Lefty’s response was typical. He said, “You keep the salary. I’ll take the cut.”. Lefty finally signed for $13,000. In 1937 he went 21-11. Lefty’s roommate was Joe DiMaggio, and he had some unusual friends outside of baseball. Some included Ernest Hemingway, George Gershwin, Jame Michener, Jack Dempsey, and George and Barbara Bush.

Like all fastball pitchers, Gomez’s velocity dropped in his later years, and he pitched in fewer games. He left the Yankees after the 1942 season with a 189-100 record. This led to Boston Braves manager Casey Stengel to come calling. The Braves signed him, although he gave very helpful advice to the Brave’s young pitchers, the team nonetheless released him on May 19 before he had appeared in a regular-season game, probably due to him mouthing off to Stengel because he was gone five days after the incident. The Washington Senators gave Gomez a final chance. On May 30, Lefty was named to start the second game of a doubleheader against the Chicago White Sox in Griffith Stadium. Gomez was beaten 5-1, and it would be his last major league game.

Lefty Gomez won the triple crown of pitching award twice in 1934 and again in 1937. In 1972 he was elected to the National Baseball Hall of Fame. In 1986 MLB awarded him the King of Baseball Award. Lefty passed away in 1989, and his wife June in 1992. Both were living in California.

Gomez won the very first All-Star game and drove in the first run in that game. Lefty Gomez will always be “The Pride of the Yankees.”