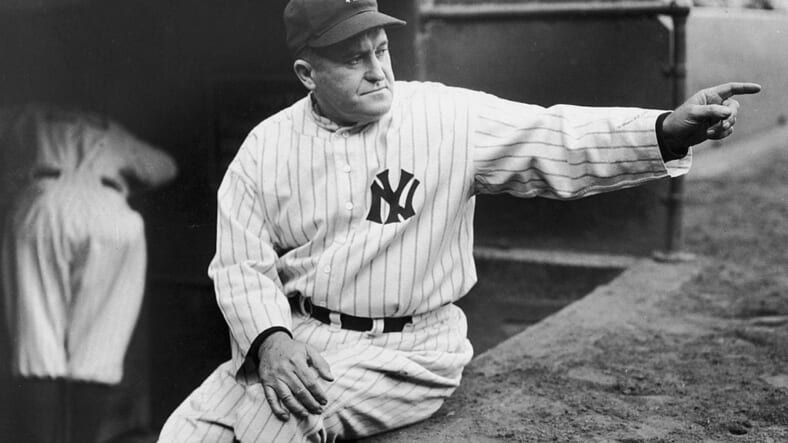 American baseball manager Joe McCarthy (1887 - 1978) of the New York Yankees sits at the edge of the dugout and points out something on the diamond, late 1930s. (Photo by Bruce Bennett Studios via Getty Images Studios/Getty Images)

The New York Yankeeâ€™s Joe McCarthy was a smaller fellow who dreamed of being a baseball player in his rough and tumble neighborhood, ruined a knee, and would never reach the major leagues as a player.Â  Yet, he would become one of the winningest baseball managers in the history of all of baseball. Recently I published my top 10 Yankee managers.Â  It was torture determining my top three.Â  I placed Casey Stengel as number one and Joe McCarthy as number three as Stengel accomplished his seven Yankee Championships in 500 fewer games. But looking at his entire career managing three teams, he was number one.

Joe McCarthy was born in Philadelphia on April 21, 1887. It was not in the high-end Germantown section of today but the working-class nineteenth-century neighborhood.Â  When he was only 3 years old, his father was killed in a cave-in while working as a contractor. McCarthyâ€™s impoverished upbringing forced him to do everything from carrying ice to shoveling dirt. Still, his prowess playing baseball in the Germantown section of Philadelphia soon earned him attention. He was a member of his grammar-school team as well as a local team in Germantown.

â€œMcCarthyâ€™s boyhood was not a mere light mixture of school and baseball. Joe worked like most boys in his station. Joe did not finish high school as he had to work, he carried ice and he dug holes for a fence builder.Â  He described it as backbraking under the hot sun.Â  This was all while attending grammar school.Â  When he left highschool he became a bobbin boy at a yarn mill.â€

Joe worked very hard to bring money home to his widowed mother, who worked as a child care nurse for a wealthy Philadelphia family.Â  But through all of this, McCarthy continued his love of baseball, playing in the local sandlots.

In a stroke of bad luck, McCarthy broke his kneecap while playing ball one day.Â  The injury left Joe with loose Cartlidge that dramatically cut down his speed on the bases.Â  Although he would have a relatively successful minor league run, his lack of speed would ultimately prevent him from ever reaching the major leagues.Â  He was one of the very few baseball managers to never play in the majors.

When Bill Clymer left his job as Wilkes-Barreâ€™s manager after the 1912 season, McCarthy received his first managerial job at the age of 25. He did quite well as the youngest manager in professional baseball, leading his team to a second-place finish only 1Â½ games behind Binghamton.Â  This would be the beginning of a managerial career that would last 24 years, his most successful with the New York Yankees.

McCarthy would manager Louisville. The Colonels defeated the Baltimore Orioles in the Little World Series, five games to three. He managed the Colonels for four more seasons, leading the team to a second pennant in 1925. After the 1925 season, William Wrigley, Jr., the Chicago Cubsâ€™ owner, offered the Cubs managerial position to McCarthy. The Cubs were coming off a horrible season in which they came in 8th in the National League, 20 games below .500 while employing three different managers.Â  Wrigley hoped that McCarthy could turn the team around.

This is taken directly from McMurrayâ€™s SABR biography:

â€œBefore McCarthy began with the Cubs, writer Irving Vaughn noted: â€œFor several years in the American Association, they have regarded [McCarthy] as sort of a miracle worker, but the new graduate into the big leagues canâ€™t explain his success. He has no pet theories about managing a team. He says he merely studies each individual player under him and then studies the opposition.â€

To condense McCarthyâ€™s time managing the Chicago Cubs, he indeed turned the club around.Â  After having a 68-86 season, in his first season, he brought the team to 10 games above .500.Â  He never had a losing season in his five years managing the team.Â  In 1929 he would win the National League pennant, although he lost the World Series to his childhood heroes Philadelphia Phillies.Â  However, his pennant win was the first for the Cubs in eleven years.

In his time with the Cubs, he was cited for having excellent managerial decisions.Â  However, in his 1930 season, he dropped 12 games from his 1929 pennant performance and was released by the Cubs. His baseball grasp did not escape the New York Yankees or the Boston Red Sox.Â  Both teams sought his baseball prowess.Â  McCarthy was not enamored with the Red Sox offer, which led him to talks with the New York Yankees owner Jacob Ruppert.Â  Ruppert offered McCarthy a two-year contract, and Joe accepted.

Even before the McCarthy hiring was publically announced, a Hall of Fame clipping read:

â€œThe coming of McCarthy to the Yankees is regarded in New York as a ten-strike for the Yankees and the American League, as well it should be. After all, here is a man who built up a winning team in Chicago and managed it intelligently â€“ so well did he manage the torn and battered Cubs this year that he came within an ace of winning the pennant again. What he will do with the Yankees is, of course, problematical, but the chances that he will be as successful in New York as he was in Chicago are tremendously in his favor. Managerial ability isnâ€™t a matter of geography and a manager who does well in one town should do well in another, provided he isnâ€™t hampered by his new surroundings.â€ Yet there were initial jitters: after McCarthy flubbed Colonel Ruppertâ€™s name during an early meeting with the press, Ruppert replied: â€œMaybe McCarthy will stay around long enough to learn my name.â€

Well, McCarthy not only learned how to pronounce Ruppetâ€™s name, but he hung around for sixteen seasons while winning seven World Championships for the New York Yankees.Â  And it didnâ€™t take him long to show what he could do with a good team. After four years of not winning a World Series, in his second season with the Yankees, he would take them to the World Series in which the Yankees would shut out 4 games to none against his former Chicago Cubs.Â  When asked about what was the most exciting event in his career, he would say:

â€œthe most exciting is my 1932 World Championship, not only because is was my first World Series win but it was against the Chicago Cubs.â€

McCarthy got along well with his players, even Babe Ruth, who hoped to be offered the manager job.Â  McCarthy was a players manager who always protected his players and had their respect.Â  Upon his hiring, he wrote a piece for the Philadelphia Record:

â€œI have no illusions about the task ahead of me with the Yankees. The pitching staff showed signs of crumbling under Miller Huggins (who last managed in 1929).â€ He cited the arrival of Joe Sewell, which he felt could help form â€œan efficient infield combination.â€ McCarthy also placed a lot of stock in rookie players, saying, â€œThis ought to be a pretty good year for the rookie, as I am an American League rookie myself and stand willing to be convinced.â€

McCarthy would win six more World Series Championships for a tie at seven with Casey Stengel.Â  He would have six seasons with over 100 wins.Â  In his sixteen seasons as New York Yankee Manager, he would win 1,460 games to his 867 losses.Â  His performance with the Yankees would get him inducted into the Baseball Hall of Fame in 1957.

After the Yankees, Joe would manage the Boston Red Sox for three successful years but would never bring them to the World Series.Â  It was his success with the Yankees that put him in the history books. McCarthyâ€™s career winning percentages in both the regular season (. 615) and postseason (. 698, all in the World Series) are the highest in major league history.

When it comes to Casey Stengel or Joe McCarthy, you could write a book on their lives filled with rich baseball lore.Â  I hope this summary of Joeâ€™s life has added to your enjoyment of Yankee history.