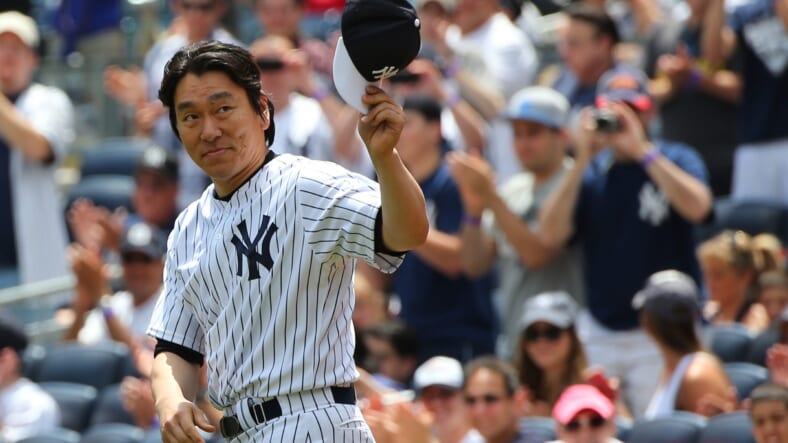 Hideki Matsui was a huge star for the New York Yankees and just as big a deal in Japan, even after he became a Yankee. The Japanese media followed him everywhere the Yankees traveled too. During the 2009 World Series, he hit .615 and was named the World Series Most Valuable Player.

Hideki Matsui was born on June 12, 1974, in Nagari, Ishikawa Japan. As a young boy, Hideki would play baseball with his brother and his friends. Hideki was a right-hand hitter, but playing with the older kids, he had one problem, he would hit the ball so well that his embarrassed older Brother demanded that he hit left-handed, or he wouldnâ€™t let him play with them anymore. So, Hideki wanting to play switched to hit left-handed. Little did his brother know but eventually Hideki would hit so well left-handed that forty-four years later, he would be inducted into the Japanese Baseball Hall of Fame.

During his high school years, he attended Seiryo High School in Kanazawa. While there, he took part in four national high school tournaments. Due to his hitting ability, in a game in 1992, he was intentionally walked. This was considered to be unsportsmanlike, however, Matsui took it in a stoic-like manner, but it did cause his team to lose the game. This would be a trait that would serve Matsui well in his years with the Yomiuri Giants, who would draft him in 1994.

In the professional league Matsui didnâ€™t fair all that well in his first three years, but that would be the last time in pro his career that he would not be a baseball star. His break-out season came in 1996 when he batted .314 with 38 home runs, and 99 RBIâ€™s. Matsui would go on to be Japanâ€™s best playing baseball star for the next five years, earning him the nickname â€œGodzillaâ€. In 2001 with his contract ended the Yomiuri Giants would offer him a six-year contract, valued at $64 million, but Matsui would refuse. Matsui tested the international market and signed with the New York Yankees in December 2002. Matsui being a Japanese sports hero was afforded a fan cheering parade to celebrate the signing into the Major Leagues.

At the Yankee home opener, at Yankee Stadium, Matsui would hit a Grand Slam, the first player ever to hit a Grand Slam in his first appearance. He would go on to hit .287 with 106 RBIâ€™s but he would also commit the highest number of errors (8) in the American League. Nonetheless he became a Yankee favorite. In the post-season, he became the first Japanese player to ever hit a home run in a World Series. In a controversial move, two writers refused to put him on the Rookie of the Year ballot, so he narrowly missed the award. The two writers claimed Matsui was too old to be a rookie.

Matsui was such a hero in Japan that many members, of the Japanese media, followed him to report on his MLB successes. The 2004 season would see Matsui hit .298 with 31 homers, and 108 RBIâ€™s. In just two years Hideki had endeared himself to Yankee fans. In 2005, he would hit a career-high .305 with 116 RBIâ€™s. The following year he would hit .302 with 8 homers, and 29 RBIâ€™s, while missing most of the season due to injury he would receive trying to catch a ball in left field. Matsui signed a $52 million four-year deal, making him the highest-paid Japanese player, surpassing Ichiro Suzuki. The contract would keep Matsui with the Yankees through 2009.

In 2007 he would become the first Japanese player to hit 100 home runs. The run was in the 3rd inning of a game against the Kansas City Royals. He would finish the year with 10 sac flies, 3rd in the majors, he would be 9th in walks per strikeout. He would, on June 12, 2008, hit a Grand Slam on his 34th birthday, something he would repeat in 2009 with a three-run homer. Later in the same year, he would hit a solo walk-off homer giving the Yankees their fourth win in a row after the All-Star break. A month later, he would drive in a career-high seven runs at Fenway Park against the Red Sox, the first to do it since Lou Gehrig in 1930.

Hideki Matsuiâ€™s shining moment with the Yankees was yet to come. In the 2009 World Series, he would help the Yankees defeat the defending Champion Philadelphia Phillies 4 games to 2. He hit .615 in the series with 3 home runs and 8 RBIâ€™s. Hideki Matsui was the first designated hitter to win the World Series MVP award. He batted .615 in the 2009 World Series, helping the New York Yankees to a six-game victory over the Philadelphia Phillies. Matsui joined Lou Gehrig and Babe Ruth to become the 3rd player to hit above .500 with three home runs in the same series.

In a very controversial move, the Yankee would not renew Masuiâ€™s contract and he signed with the Los Angeles Dodgers. Hideki felt let down by the Yankees when they couldnâ€™t negotiate a contract. After a year with the Dodgers, he signed a one-year deal with the Athletics where he hit his 2,500th hit as a professional player. The same year he hit his 500th home run against the Detroit Tigers. After 2011 he couldnâ€™t get a major league contract, although he still wanted to play, so he signed a minor league contract at the age of 38 with the Tampa Bay Rays. Matsui always saying he liked the Yankees best, signed a one-day minor league contract with the Yankees in 2013 so that he could retire from baseball as a New York Yankee.