New York Yankee History: The most famous exit from the mound at Yankee Stadium (Video) 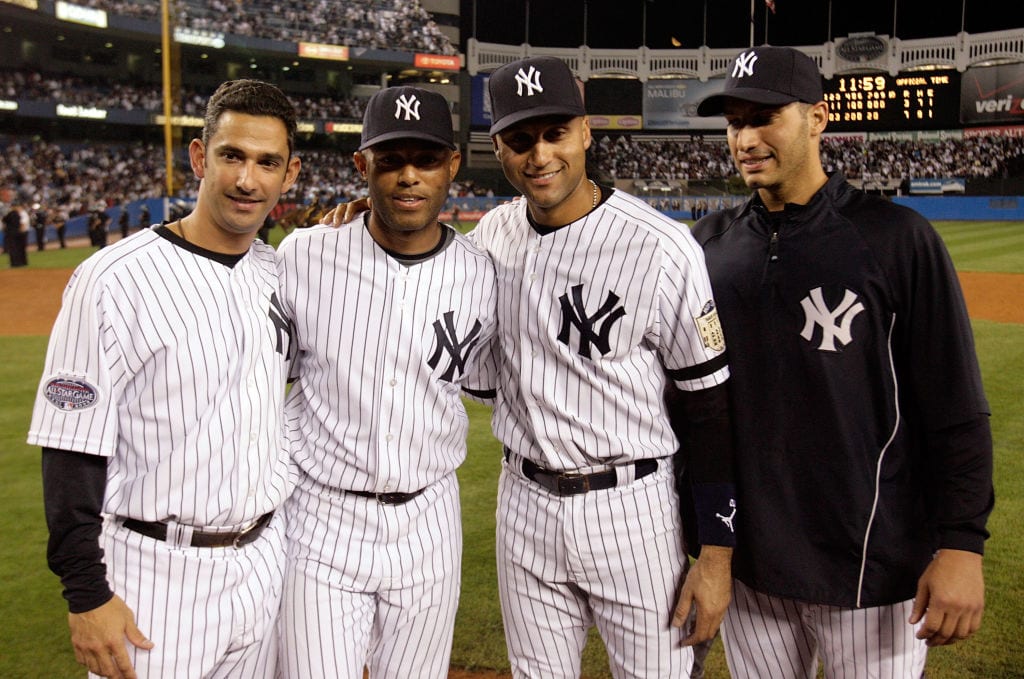 For the New York Yankees, it was September 26, 2013, a cool moon-lit evening that was to feature a baseball game between the Yankees and the Tampa Bay Rays.Â  It would be the last game played at Yankee Stadium in the 2013 season.Â  It would be a game in which the Yankees would be shutout.Â  But the Yankees weren’t in contention, so the loss was not heart-crushing.Â  Nevertheless, there was something extraordinary and emotional about this night.Â  Before the season, Mariano Rivera announced that he was to retire at the end of the season.Â  This night would be the last he would grace the mound at Yankee Stadium.

The game was started just after 7 pm on this Thursday night in the Bronx, Ivan Nova started the game for the New York Yankees. The game went well until the fourth inning when Nova gave up a run.Â  In the 7th, he gave up another run and was replaced by Dellin Betances.Â  Alex Cobb was pitching for the Rays and kept the Yankees scoreless through seven innings.

Being the last game at the Stadium that year during the game while the fans in the sold-out Stadium of 48,675, drank their soda and beer and chomped on hot dogs and ate pizza, player’s images appeared on the jumbo screen thanking fans.Â  With the game not going the New York Yankees way, fans were mostly silent.Â  Then the image of Mariano popped up with this thank you message, and the fans came alive with applause.

It was now the eighth inning and Dellin Betances was on the mound.Â  He would give up two more runs.Â  From the time he threw the first pitch, you could hear the crowd beginning to chant Ma-Ri-A-NO!Â  As emotion built, so did the chant reaching a crescendo as Manager Joe Girardi emerged from the dugout to take the ball from Betances.Â  As he did the chant from the fans changed to “We want Mo”, We want Mo.” Joe signaled to the bullpen, and #42 came out onto the field to the familiar enter Sandman entrance music.

Bellowing from the announcer’s booth came Bob Shepards recorded voice “number 42 Mariano Rivera number 42.”Â  As a sign of respect, the visiting Rays line their dugout applauding. You could feel the emotion building in the stands.Â  Mariano recorded the final two outs of the inning and was greeted by applause as the fans assumed he wouldn’t be coming out in the nine in a game that the Yankees were being shut out.Â  But when the top of the ninth started, Mariano, to the delight of adoring crowds, emerged from the dugout after a longer than usual pause to pitch the ninth. Little did fans know what history-making drama would be forthcoming.

Setting the scene, the feeling in the Stadium we electric.Â  From the time #42 took the mound, the fans stood applauding. Jose Lobaton tapped back to the mound. Yunel Escobar then popped out to second. Only one batter left, and Rivera wouldâ€™ve closed it out, but that didn’t happen.Â  The Yankees have a way of highlighting important moments.Â  After getting Escobar out, in a highly unusual move, Joe Girardi sent Mariano’s two best friends on the team, Andy Pettitte and Derek Jeter to the mound to take the ball from Mariano one last time.

As the pair got halfway to the mound Mariano turned and realized it wasn’t Joe Girardi, and smiled.Â  As they reached the mound Andy put out his hand and Mariano gave him the ball and immediately hugged Andy, head on his shoulder he lost it and began to shake and cry.Â  All this while the Yankee faithful wildly cheered.Â  It seemed as though Mariano hugged Andy for the longest time, before turning, and hugging Derek Jeter. He finally regained his composure, and he walked off the mound for the final time at Yankee Stadium.

As he left the mound, it seemed impossible, but the crowd roared even louder as he approached Joe Girardi at the dugout steps, Joe hugged him as tears ran down Joe’s face.Â  Mariano worked his way through the dugout, being hugged by all the players.Â  The last player in line was Alex Rodriguez who hugged him as well.Â  A-Rod than grabbed his shoulders and guided him back onto the field.Â  The crowd showered Mariano with love as he tipped his cap several times acknowledging the fans’ love.

Mariano Rivera was done and he did it on his terms.Â  The previous year he had been injured shagging balls in the outfield and had to be carried off the field with the season ended knee injury.Â  He didn’t want to go out that way.Â  He recovered and pitched a brilliant season as he had done so many times before leading up to that night at Yankee Stadium when he would walk off the mound one last time.

In 2019 Mariano Rivera became the first baseball player ever to be unanimously inducted into the American Baseball Hall of Fame.Â  In the New York Yankees Monument park Rivera had his number 42 retired and a plaque placed in his honor.

EmpireSportsMedia’com’s William Parlee is a member of the Society for American Baseball Research.