Nats GM doesn’t want to attach a bad contract to Soto; amid trade interest from Yankees and other teams 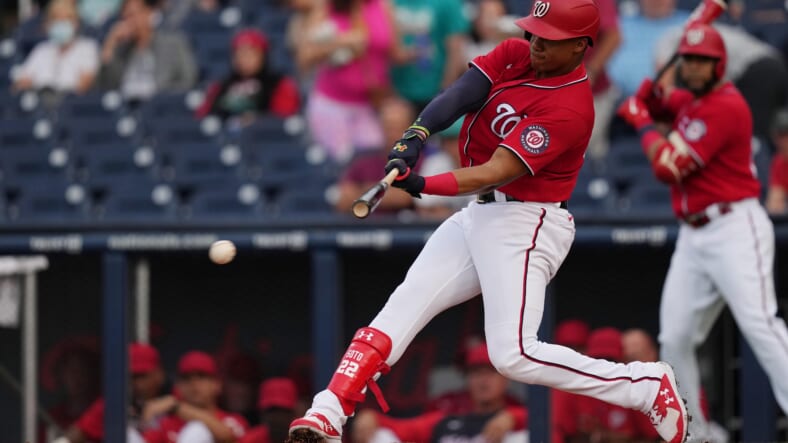 Ever since the Washington Nationals announced to teams they would be willing to listen to trade offers for star outfielder Juan Soto, reports surfaced indicating their preference to attach the slugger to pitcher Patrick Corbin in an effort to get rid of his lousy contract. Before the 2019 season, Corbin (who at one point drew interest from the New York Yankees) signed a six-year, $140 million pact that covered him through 2024.

Yes, he was part of a World Series-winning team, but has had a bad 4.76 ERA in 544 innings with Washington, and is at 6.02 this year. The Nats would love to get rid of his deal to gain more financial flexibility.

That is not going to happen, though, at least not in the same Soto trade (if it occurs).

Nationals general manager Mike Rizzo plainly stated that he will not affect the potential return for any player, Soto or otherwise, by pairing him with Corbin or another undesirable contract.

“We’ve never contacted teams and talked about Juan Soto and attaching any contract to any player,” said Rizzo. “We’re not going to dilute a return for any player by adding a bad contract. That’s not where we’re at in our organization at this time. We want to get the most for each and every trade that we do, so we certainly are not going to tack on anybody’s contract to anybody’s deal, including Juan Soto’s or Josh Bell’s or anybody.”

The Yankees, of course, are monitoring the Soto situation. He is a game-changer, a true winner, and still young at 23. He already has a World Series trophy, a batting title, two Silver Slugger awards, and two All-Star berths. He is being compared to Ted Williams.

The Yankees liked Corbin in the past, but surely wouldn’t take him now

And while the Yankees have liked Corbin for years, they are surely not enamored with the Nats’ version of the southpaw, certainly not at his price.

The Nats reportedly want as many as six prospects and/or young big leaguers in exchange for Soto. Will the Yankees be able and/or willing to meet that price?

The Nationals wanted to extend Soto, but since he rejected a $440 million offer, the relationship with the player has soured and they are open to trading him.

However, they could also opt to keep him and improve the team around him in order to compete in 2023 and 2024, before he hits free agency.

“When we offered Juan this contract, with his agent’s knowledge, we told him when the deal was turned down, ’We’re going to have to explore all our options,’” Rizzo continued. “That’s all we’ve ever said. I wouldn’t be doing my job if I didn’t explore all the options now presented to us. We’ve got pretty good options. We’ve got a talented Juan Soto for two and a half more seasons. That’s Option A — it’s a good one. But we also have to think about options B and C. My job is to make this organization a consummate winner again, like we did from 2012 to 2019. I have to figure out ways, as the caretaker of this franchise, to make us a championship organization for a long time to come.”