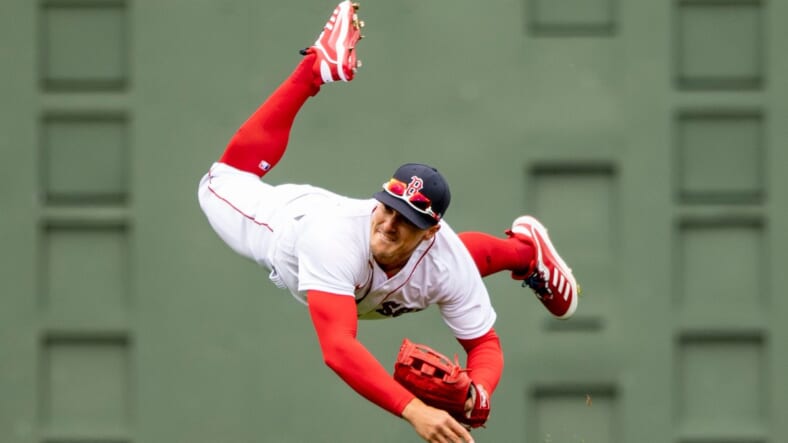 The New York Yankees were out of the postseason when they lost to the Red Sox in the wild card. However, Boston has not stopped their winning ways leading the ALCS two games to one. They have two more to play at Fenway Park before moving back to Houston if necessary.

Game One: The first game featured Sox Ace Chris Sales against the Astro’s Framber Valdez. Vazquez doubled in the top of the first, scoring Altuve from third as the Astros got on the board first. In the top of the third Kike Hernandez answered with a homer to the left-field stands to tie the game up at one apiece. Then, in the bottom, Altuve bungled a hit, and Bogaerts scored. Then Renfroe hit an RBI double to make it 3-1 Sox.

The Red Sox entered the second game of the 2021 ALCS behind a game in the series, hoping to salvage one game at MinuteMaid Park in Houston. They did it, winning the second game by beating Houston 9-5. Nathan Eovaldi went into the sixth inning, giving up just three runs; Ottavino and Whitlock combined for 2.2 scoreless innings. Hernandez gave up two runs in his .02 innings of work, while Brasier finished it up for the Sox, getting the final out and win. Meanwhile, the Red Sox racked up nine runs in the contest.

J.D. Martinez and Rafael Devers put the game pretty much out of reach for the Astros by getting two Grand Slams in the game. It started poorly for the Astros and starter Luis Garcia when Martinez got his Slam in the first inning. Then, in the second, he gave up another run, which was the night for Garcia. To make matters worse for the Astros, the Sox loaded up the bases for Rafael Devers to hit his Grand Slam in the same inning. It’s the first time in postseason history that two Grand Slams had been achieved in the first two innings of a postseason game.

In the top of the fourth, Kiki Hernandez, who led the Sox in hits, this postseason hit his 3rd home run of the postseason making it 9-0 Red Sox. The Astros got three runs back in the bottom of the sixth, but it was far too little, far too late. That also signaled the end of Eovaldi’s pitching effort. At the bottom of the ninth, the Astros made a valiant attempt at a rally, and although scoring two home runs, it wasn’t enough. The loss for the Astros tied up the series at one apiece. The winning pitcher was Eovaldi and the loser was Garcia.

If the Houston Astros looked back to the last game at their home park as a miserable failure, they were in store for even greater embarrassment at Fenway Park last night. The Boston Red Sox piled on the runs, twelve of them to put the Sox up two games to one.

The Red Sox sent out Eduardo Rodriguez to start facing Jose Urquidy. Just like in the previous game, the Astros were out of the game early. The Red Sox scored nine runs in the first three innings. It was a chilly autumn night in Boston but even colder for the Astros. In the second inning, Boston got on board with an RBI hit by Christain Vazquez. Then, JD Martinez scored on a line drive that bounced off Jose Altuve. Boston 2-0. Then with the bases loaded, Kyle Schwarber got a Grand Slam Boston 6-0. In the third, Renfroe scored, then Christian Arroyo hit a two-run blast into the green monster stands to make it 9-0 Boston.

In the top of the fourth inning, Kyle Tucker hit a three-run homer for the Astros, but again just as in the last game, it was too little too late. Meanwhile, Boston starter Eduardo Rodriguez pitched masterfully through six innings. In the bottom of the sixth, J.D. Martinez struck again, this one a two-run shot into the green monster to make it 11-3 Boston. In the bottom of the eight, Devers tacked on another run up into that same monster for the final score of 12-3 Boston, putting the Red Sox up two games to one in the series with two more games at Fenway. The winning pitcher was Rodriguez and the loser Urquidy.

This series between the Red Sox and the Astros have been a home run-fest for anyone who likes a lot of action in a baseball game. There have been three Grand Slams, 14 home runs and a total of 38 runs scored. But that was not the only excitement in the games. Both teams have made some fantastic defensive plays. With the Red Sox playing with their enthusiasm in the last two games, it’s hard to imagine that they can be stopped. The difference in the teams, other than the Grand Slams is that the Red Sox has had excellent starting pitchers with the last two starters going nearly twelve innings combined.