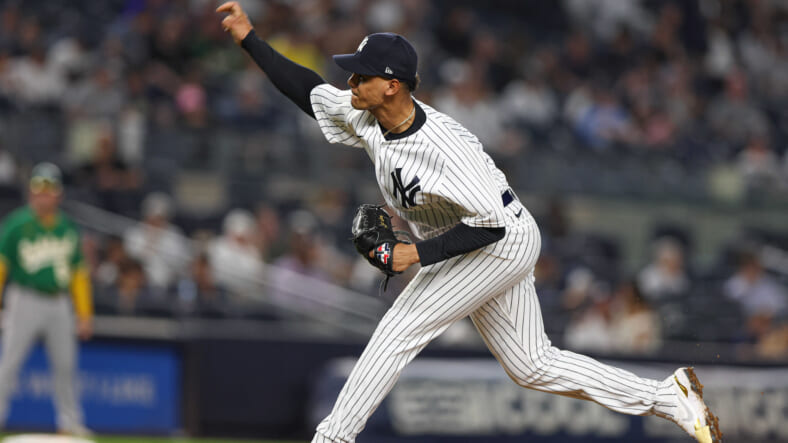 When the Yankees traded Albert Abreu to the Rangers, they had essentially waved a white flag and opted to keep around new talented arms like JP Sears and Ron Marinaccio to develop over Albert Abreu. With how Abreu pitched in Texas and eventually getting DFA’d, it seemed like the Yankees made the right choice. He’d pitch for the Royals, get DFA’d again, and then the Yankees picked him up. With the injuries in the Yankee bullpen, some relievers regressing, and the rotation slowing down, he’s become really important.

The stuff has always been electric, but for the first time in his career, he’s putting it all together. His fastball finds the zone consistently, his slider makes batters jump out of the strike zone, and he’s someone you want on the mound more and more. With his groundball skills and strikeout numbers, he’s a great reliever.

In 2021, Albert Abreu’s 45.5% GB% just wasn’t where you wanted it to be at, considering he was a sinkerballer. Typically, getting your GB% over 50% is the goal, and Albert Abreu took up this task better than I could’ve imagined.

At a 62.5% GB% for the Yankees, he’s got an average exit velocity of 83.6 MPH and a 0.0% Barrel rate against. It’s difficult to generate barrels when the ball runs in on your hands and causes an inside-out swing or a roll-over. Typically those weak batted balls into the ground don’t go for hits, and groundballs typically have pedestrian SLG% numbers, so you can prevent a lot of extra damage by simply keeping the ball on the ground. The Yankees have played great defense this year as well, so a ton of these groundballs get converted for outs, thus aiding the pitching staff.

Abreu’s pitching to the Yankees’ strengths and his sinker’s strengths, but he’s also cleaning up his biggest issue.

Cutting Down on Free Passes

Albert Abreu’s biggest issue lies in his walk rate. For the longest time, Abreu has been incapable of keep the ball in the strike zone. This has led to a lot of free passes, extra runners reaching, and thus more runs being given up. Nasty stuff is great, but you need to at least throw strikes somewhat consistently in order to find MLB success. Here’s Albert Abreu’s BB% in 2022 with each team he played with:

He went from two absolutely horrific and unacceptable walk rates for an MLB pitcher to a middle-of-the-road walk rate seamlessly. Part of that is his ability to get ahead in counts, with his first pitch strike rates shooting up as a Yankee:

This has led to the next big spike, an increase in strikeout rates:

Throwing strikes early in counts doesn’t just mean you’ll walk fewer guys, but you’ll also see that you’ll make batters made worse swing decisions. Albert Abreu struggled to put hitters in counts where they’d be asked to make difficult swing decisions instead, he often put himself in counts where he’d be the one who would have to make a tough pitch, and hitters could remain more disciplined. Fewer walks and more Ks are a recipe for success, but what is Abreu’s role going forward?

How Can Albert Abreu Move Up the Yankees Bullpen?

Albert Abreu can really climb up the trust tree as he excels in bigger spots. Abreu is someone who could get high-leverage innings going forward, though with Jonathan Loaisiga’s return from injury being right around the corner, that’ll make it difficult. We’ve seen the Yankees start trusting their youngsters more, but will Abreu get more usage in these 7th-8th-9th inning situations if he continues to pitch like this? We’ll have to wait and see.

He’s not a surefire thing, and this is a small sample size, but it’s still interesting. There’s a change in approach, a change in command, and the stuff is as good as always. Maybe, just maybe, Albert Abreu is finally putting it all together.