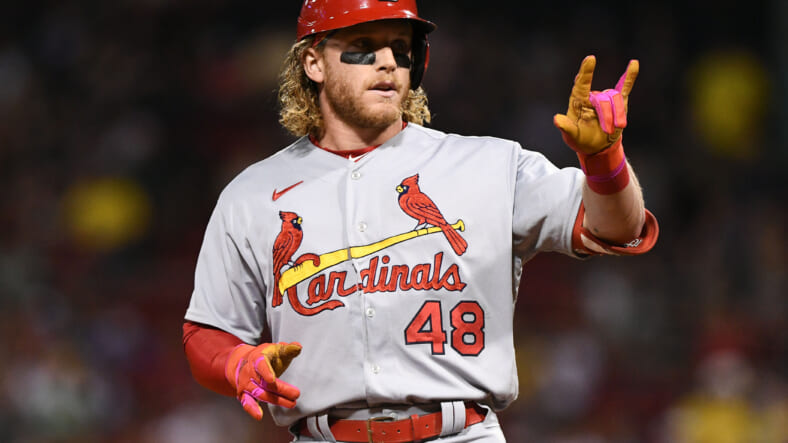 The New York Yankees have looked a little shaky for about a month. A team that looked immortal, they’ve hit a funk of uninspiring baseball riddled with poor play. Always a hit away, always a pitch away, the Yankees are in need of that spark plug. On the podcast, I’ve discussed playmakers, and Harrison Bader fits that mold. He’s a player that does a lot of things a lot of people overlook, and I think he could change the complexion of this roster. The Yankees need that extra jolt of power, speed, flash, a player who can impact a game in all 3 phases, a player who’s just a small tweak away from stardom.

The Best Defender In the Game?

There are few players who can rival Harrison Bader’s sheer defensive talent. Despite the fact that Harrison Bader has under 2,000 innings in the outfield since 2020, he has the most Outs Above Average among outfielders (22). In terms of UZR and DRS, he’s 18th in DRS (14) and 6th in UZR (16.2). Again, these are volume stats, meaning the more you play, the better these stats will be. He’s only 71st in games played among all outfielders since 2020, so it’s remarkable that on limited volume, he’s producing Gold Glove production.

His 94th percentile Sprint Speed helps with covering lots of ground, but it’s also his amazing bursts and his strong jumps. While he actually has below-average routes according to Baseball Savant, he more than makes up for it. His arm isn’t anything to write home about this year, but in years past, he’s had solid throwing seasons. In a less cavernous ballpark like Yankee Stadium, Bader could easily flourish and become a showstopper who makes the jobs of Andrew Benintendi and Aaron Judge a whole lot easier in the corner outfield.

Dynamite On the Base Paths

As previously mentioned, Harrison Bader has unbelievable speed. His 94th percentile Sprint Speed would overtake Isiah Kiner-Falefa as the Yankees’ fastest everyday position player. Tim Locastro still has the edge on him at the 99th percentile, but he’s a pinch-runner primarily. Bader isn’t just some raw speed tool guy who doesn’t make strong base running decisions, as his 7.9 BsR is the 8th best since 2020 as well. He’s a ridiculous baserunner who can swipe bags, take an extra base, and put pressure on the defense. Making a defense worried about the runner at first or worried that said baserunner will go 1st to 3rd if the ball isn’t fielded perfectly creates errors, bad pitches, slip ups, and runs for the Yankees.

Here’s Bader scoring from second on a flyball to right-center to give the Cardinals a 4-0 lead instead of just a 3-0 lead. He’s made base stealing a greater priority for him, swiping 15 bags in 72 games, tying his career best. He has as many stolen bases as Isiah Kiner-Falefa in a fraction of the playing time, a testament to his prowess on the base paths. Having that level of speed on base for the top of the lineup like DJ LeMahieu, Aaron Judge, Anthony Rizzo, and Giancarlo Stanton is going to give a lot of teams fits. The hit and runs that you could execute with Bader and Trevino/IKF/DJ would be stellar, with Bader’s speed and their contact skills combining for some instant 1st and 3rd or even 1st to home situations for the Yankees.

We all know he’s a defensive stud and a burner on the base paths, but what about his bat?

Tapping Into Some Raw Power

Harrison Bader has some ridiculous raw power tools. Some people may think he’s just a speedster beating out weak groundballs, but there’s some serious power output from Bader. At 6’1 210 lb, Bader isn’t a small scrawny guy, and the exit velocity numbers show added upside for Bader in the power department. His Max HR distance last year of 453 feet matches or bested the Max HR distance of these noted sluggers last season:

Maybe hitting HRs the farthest isn’t the *best* way to look at power, but how about Max Exit Velocity? At a 111.5 Max Exit Velocity last season, Harrison Bader ranked in the 80th percentile, generating a higher total than these sluggers:

It’s not as if the results for Bader power-wise hasn’t been there, as he clubbed 16 HRs in 401 PAs last season, putting him at a ~24 HR pace over 600 Plate Appearances. This year he abandoned his power-heavy approach for more contact, but I think that approach just doesn’t work for him. He doesn’t have a high BB% and thus isn’t a high OBP guy, so having a higher SLG% and putting balls into orbit (like this one off of LHP Joey Luchessi) is just more beneficial for him, and the OPS+ numbers agree.

The key to success here for Bader would be to try to pull his flyballs more, as he tends to hit a lot of his flyballs to the opposite field or to the middle of the field. While RF does encourage right-handed hitters to go the other way, his opposite field power is just not there. He excels when pulling the ball, and getting more consistent barrel control for Bader could lead for more power and a lot more HRs. Even if Bader does struggle to tap into that power, his 105 wRC+ since 2020 will suffice. If you could get that 110-115 wRC+ production that Bader gave in 2019 and 2020, Bader instantly becomes a 4-5 WAR player. Don’t believe me? His 4.9 bWAR and 4.4 fWAR from 2020-2021 in 153 games seems to agree with me.

There’s more than meets the eye with Harrison Bader, and while he won’t return for another few weeks, he’s someone who could change the outlook of this entire lineup dramatically.