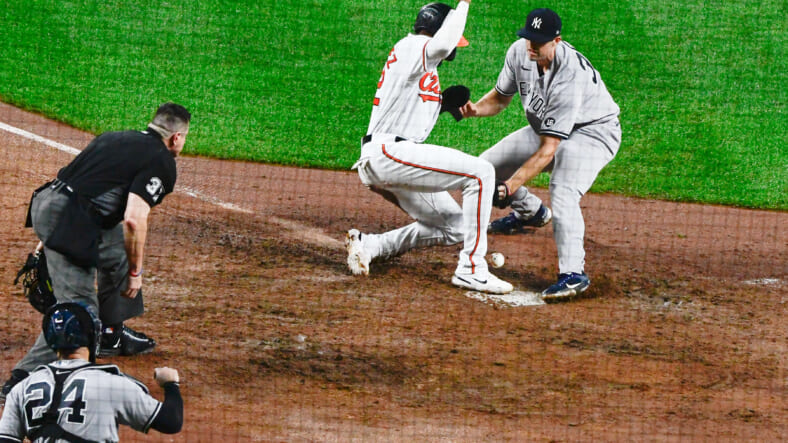 The New York Yankees are simply finding ways to lose at this point, blowing a 9th inning lead to present the Baltimore Orioles with their 47th win of the year. Every game counts, as the Yankees desperately try to hold on to a Wild Card spot. After losing to Baltimore on Thursday, they are 0.5 games back behind Boston and Toronto, with a series against Cleveland coming up.

Letâ€™s start off with a bit of injury news. The Yankees are currently waiting on a few reinforcements in the starting pitching rotation, as Domingo German is preparing to make a comeback, slated for his second rehab outing later this week, and will likely join the Yankees as a relief option. Jameson Taillon also landed on the injured list recently, but he will likely make a return next week after a partial ankle tendon tear. His rehabilitation is going well, throwing a 16-pitch bullpen on Wednesday, indicating heâ€™s on the right track to return.

Both Jonathan LoÃ¡isiga and Luis Severino are battling their way back to the team. LoÃ¡isiga, who has had a fantastic season as the Yankees’ top relief pitcher, has been dealing with a right shoulder strain since September 5. Manager Aaron Boone is optimistic he will get a few options back in the coming days, indicating that they will see how Jonathan’s shoulder responds to his throwing program.

Clearly, there is some good news in the injury department, but the Bombers have a big-time game against Cleveland on Friday evening with Luis Gil on the mound. Gill got smacked around a bit in his last outing, giving up five earned runs over 6.0 innings. After starting his career at the MLB level with three consecutive games without allowing an earned run, he has given up eight in the past two contests.

Offensively, the Yankees need to perform better. Scoring two runs against a poor Baltimore team is unacceptable. They tallied seven hits and collected six walks, which should provide more run support. In addition, catcher Gary Sanchez allowing a wild pitch in the bottom of the ninth inning to allow Baltimore to steal the game is unfortunate. Sanchez has been solid as of late, but questions regarding his defense have once again bubbled to the surface.