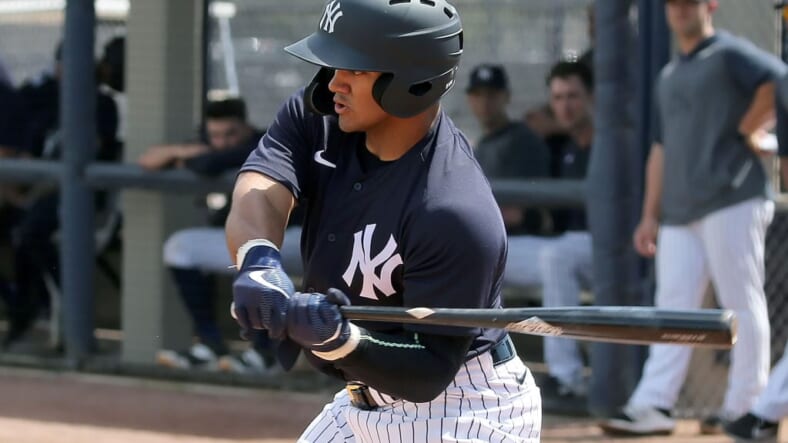 Spring training is around the corner. Baseball season is getting closer! And this time, as of now, there will be a minor league season. That, for the New York Yankees in particular, is extremely important and encouraging given that most of their top-end talent is in the lower minors. These players need games and reps badly to develop.

Several outlets and publications have published their list of top prospects, and the usual names on the Yankees’ organization are Jasson Dominguez, Deivi Garcia, and Clarke Schmidt.

However, Fangraphs’ took it up a notch. Expert Eric Longenhagen published his list of the 47 best prospects in the New York Yankees’ system.

Yankees’ Dominguez is the “highest variance prospect in baseball”

Unsurprisingly, he ranks Dominguez as the best of the bunch, with a 50 “Future Value” evaluation. Longenhagen wrote that “we still only truly know about Dominguezâ€™s showcase tools (what itâ€™s like to watch him take BP and run, both of which are scintillating) and very little about how heâ€™ll perform against pro pitching.”

“Itâ€™s hard to find switch-hitters with power like this, let alone ones who already have usable swings from both sides of the plate at this age. Dominguez got very jacked in 2020 and looked more like a Mr. Universe competitor than a baseball prospect,” he said about the Yankees’ teenage phenom, closing with the argument that “heâ€™s the highest-variance prospect in baseball, and maybe the highest-variance athlete in sports.”

Garcia was ranked second by Longenhagen when it comes to Yankees’ prospects. He wrote about him that “the entire repertoire is either average or a shade above it, and I think Garcia will end up working around 140 innings and generating 2-ish WAR annually.”

Here is the complete ranking: