Did the Yankees just draft the left-handed Aaron Judge? 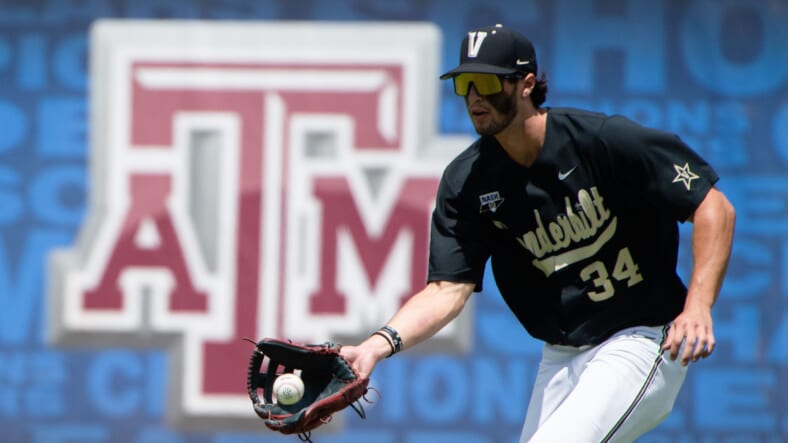 The Yankees held the 25th pick in the 2022 MLB Draft, and they went big with their selection, drafting 6’7 OF Spencer Jones from Vanderbilt. Few players pop off of the television the way Jones does, but few players come with his risk. A big-time slugger with freakish athleticism, Jones presents the upside to win multiple MVPs, but the downside to be someone who simply can’t make enough contact to be an MLB-caliber hitter.

The biggest MLB comp for him? Aaron Judge.

Spencer Jones doesn’t just have good power, he has generational power. He recorded the single hardest hit ball ever tracked at the collegiate level over 119 MPH. In 2022, only Shohei Ohtani and Giancarlo Stanton have hit baseballs over 119 MPH. That’s simply ridiculous power, and that gets even more impressive when you realize that he’s still extremely raw as a hitting prospect. Initially a pitcher as well, UCL issues had him focus primarily on his hitting.

Spencer Jones is the same height as Aaron Judge and by the time he’s with the Yankees we’ll have robot umps pic.twitter.com/pEIK7lqQCt

Slashing .370/.460/.643 with 12 HRs and 14 SBs (14/15) in 61 games, he had a dominant 2022 season. The Yankees are getting someone who can blister baseballs for years to come and continue the trend of powerful hitters in the middle of their lineup, except this time from the left-handed side. The power is great, but there is more to Jones’ game that makes him great.

Spencer Jones has solid sprint speed numbers out of the box heading to 1st. The ability to swipe bags were apparent in college, swiping 14 in just 15 attempts. The speed may not stick around as he gets older, but for now, it’s a plus tool of his. His defense could be really good as well, with Jones hoping to be a centerfielder at the MLB level. He played right field this year as Vanderbilt already had a great defensive centerfielder Enrique Bradfield. As previously mentioned, Jones was a pitcher coming out of High School, and as he’s recovered from his UCL damage, he’s gained arm strength back that should allow him to grade out well as a defender in right field, though we’ll see if his range allows him to patrol center.

Areas Of Growth For Spencer Jones

There are big-time concerns about whether Jones can make contact consistently enough to be a quality MLB player. Though I believe he can definitely work on that, I personally find his biggest weakness is his inability to pull baseballs. To have success at the MLB level, power-wise, you either have to pull flyballs. The alternative is to be Giancarlo Stanton, and while maybe Jones can be that, I still would rather be safe and just try to pull more balls in the air. If he can consistently pull baseballs in the air, the HR totals will skyrocket with his natural pop, and he’ll also handle inside fastballs a lot better.

Non-fastballs present a completely new challenge for Jones, with him struggling to make contact or good swing decisions when he faces them. The Yankees are going to have to fine-tune and polish the game of this young toolshed, but if they can do it, they’ll have their hands on a great ballplayer. The Yankees aren’t stupid, they know the risk they’re taking here. Ultimately, the Yankees could either see themselves getting a future top 10 hitter in the sport or just a power bat off the bench who never sticks at the MLB level.

Spencer Jones will be fun to follow at the MiLB level, and as he starts to get comfortable in the pros, we’ll see some more video game power soon enough on the Yankees.