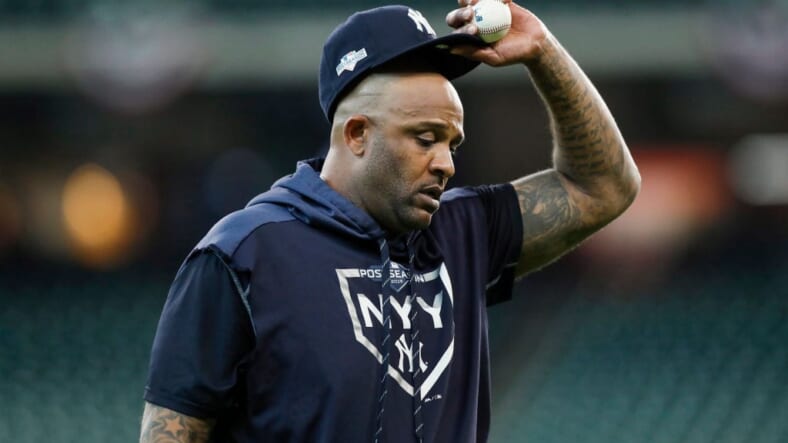 HOUSTON, TX - OCTOBER 13: CC Sabathia #52 of the New York Yankees warms up before game two of the American League Championship Series against the Houston Astros at Minute Maid Park on October 13, 2019 in Houston, Texas. (Photo by Tim Warner/Getty Images)

The New York Yankees are still wondering what went wrong in the American League Division Series against the Tampa Bay Rays. They dropped the best-of-five affair 3-2, including a heart-breaking 2-1 loss in the fifth game, one that featured a masterful performance by Gerrit Cole on three days’ rest.

The Yankees made some questionable decisions and calls throughout the series, most notably benching Gary Sanchez for Kyle Higashioka and opting to use Deivi Garcia as an opener in Game 2 and J.A. Happ as the “bulk” reliever that same night. Unfamiliar and unhappy with the role, the latter was hammered and allowed four runs in 2.2 frames.

Also, the Yankees chose to throw closer Aroldis Chapman for a big workload in Game 4, handicapping him for Game 5. The closer’s pitch selection to Mike Brosseau, the guy that homered in the 1-1 game to give the victory to the Rays, was also questioned.

CC Sabathia, a recently retired New York Yankees’ great, was among the voices who torched the organization for its curious decisions.

Sabathia said on his most recent â€œR2C2â€ podcast with Ryan Ruocco that the Yankees should have used a traditional starter on Game 2, citing Garcia, Happ and Masahiro Tanaka as options.

â€œWe tried to play their game and they beat us at it and it ended up costing us the series, is how I feel about it,â€ Sabathia said.

Did the Yankees lose while playing the Rays’ game?

Tampa Bay is known as one of the most analytical-driven organizations in the major leagues, constantly deploying openers, carefully selecting pitching matchups, and more.

â€œAll we talk about is this kidâ€™s [Garciaâ€™s] character and how mature he is and I feel it was a perfect time to let him rock, let Masa rock, let J.A. Happ rock,â€ Sabathia said. â€œAny one of those guys start the game and we score five runs, we win Game 2.â€

Sabathia was also puzzled for Boone’s usage of Chapman, asking him to get multiple outs on Game 5. â€œI mean like, heâ€™s gonna get seven outs?â€ Sabathia said. â€œWhat the fâ€”k? Iâ€™m sorry, but come on man. What are you doing?â€

The Yankees were short on reliable relievers, so they ended up asking more from Zack Britton and Chapman. Having them throw multiple innings and doing so on consecutive days simply didn’t happen in the regular season.

â€œThe way we use our relievers all year because we have so many of them lined up, I hate them to sit down and get up,â€ Sabathia said. â€œThey never end the inning and get back up. So you want [Chapman] to do that sâ€”t two times and he [doesnâ€™t] ever do that.â€

â€œHe had him set up for the strikeout if he threw him the slider,â€ Sabathia said of the final pitch of the at-bat. â€œIf [Chapman] backs up with another slider right there, itâ€™s strike three and heâ€™s on to the next hitterâ€¦ Gary [Sanchez] put down a slider and [Chapman] shook and threw a fastball. He could have thrown a split up there and struck that guy out.â€