Can the New York Yankees right their 2018 wrong? 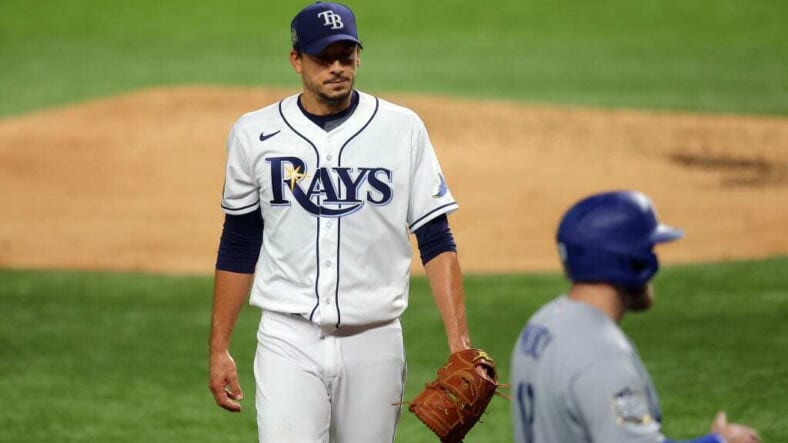 ARLINGTON, TEXAS - OCTOBER 23: Charlie Morton #50 of the Tampa Bay Rays reacts against the Los Angeles Dodgers during the third inning in Game Three of the 2020 MLB World Series at Globe Life Field on October 23, 2020 in Arlington, Texas. (Photo by Ronald Martinez/Getty Images)

After the 2018 season ended, the New York Yankees knew that they needed to do something to address their starting rotation. They kicked off the offseason by trading for Seattle’s ace, James Paxton.

While that was a good start, the Yankees knew that they needed to do more to address their rotation. Back in the previous trade deadline, the Yankees had made a deal to acquire Blue Jays starting pitcher, J.A. Happ.

Happ was sensational when he came over to the Yankees. After getting traded to New York, Happ went 7-0 with a 2.69 ERA. However, Happ stumbled in the playoffs which was one of the reasons the Yankees were bounced in the first round.

Happ was a free agent after the 2018 season ended. The Yankees had Paxton, but they were examining the free agent market looking to secure one more starting pitcher. There were two pitchers they kicked the tires on.

They seemed to be interested in resigning Happ or potentially bringing in Charlie Morton. Morton had been a standout for the Houston Astros after seeing a career resurgance. In fact, Morton pitched the deciding game 7 against the Yankees in the 2017 ALCS.

Despite Morton’s dominance over them and his incredible 2018 season, the Yankees decided to move in a different direction. They decided to resign the familiar face in J.A. Happ. A decision that would come back to truly bite the bombers.

Charlie Morton signed with Tampa Bay while the Yankees resigned Happ. Both pitchers were signed to two year deals. However, it was clear from the very beginning that signing Happ was a mistake by Brian Cashman.

Happ was not just bad, but god awful in 2019. Happ was 12-8 with an ERA approaching five. He was so bad that he was kicked out of the starting rotation and barely appeared in the Yankees 2019 playoff run.

Meanwhile, Charlie Morton was sensational for the Rays. Morton was 16-6 with an ERA of 3.05 and he finished third in the Cy Young voting. Not only that, but Morton appeared in two starts in the postseason where he went 2-0 with a 1.80 ERA for the Rays.

Now, Happ had a better 2020 than Morton did. Morton battled injuries, however, when the postseason came around, it was a different story. He was dominant again in the playoffs going 3-1 with a 3.15 ERA.

Morton could have made a difference

Meanwhile Happ was lit up by the Tampa Bay Rays in his lone start in the ALDS. I’m willing to go out on a limb and say that if the Yankees signed Morton over Happ in 2018, they would’ve defeated the Astros to make it to the WS in 2019.

They also would’ve defeated the Rays this year in the playoffs. That decision was horrific by the front office, but they have the chance at Morton again. Morton is proven in the postseason, and despite his age, I think he’s a guy they should seriously target this offseason.

There are already reports around the Yankees interest. They need a starter outside of Gerrit Cole to come up big when it matters. There aren’t many big game pitchers like Charlie Morton available. I think they should do what they can to bring him in on a reasonable deal.