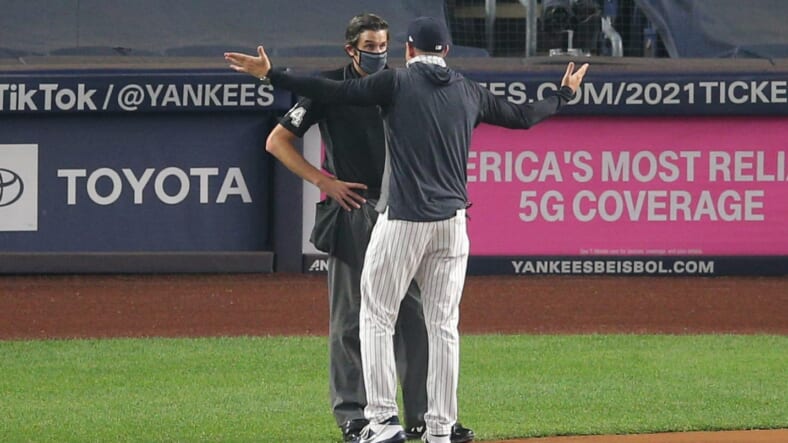 Last nightâ€™s exhibition against the Tampa Bay Rays was ugly, and hopefully rock bottom. The New York Yankees fell 8-2 against their nemesis from the last two seasons, and fell to 5-8 on the young 2021 campaign.

That 5-8 win-loss record is the worst of the American League so far, which is something that the Yankees are not used to. Frustrated fans threw baseballs to the stadium outfield during game play, which was frankly a sad scene.

The game included two painful errors in the fifth inning and another cold game by the offense, as the Yankees had only one hit through the first six frames. Things wonâ€™t get better on Saturday, as they will face perhaps the American Leagueâ€™s best pitcher so far: Tyler Glasnow.

Yankeesâ€™ skipper Aaron Boone, also frustrated, held a team meeting after the game and put his quiet personality aside for a few minutes. He reportedly let his players hear himself, in anger, as he tries to spark a fire.

The Yankees need to pick it up

The last time the Yankees were in sole possession of the American Leagueâ€™s worst record was in 1998, and as you probably remember, they finished with an impressive register and ended up winning the World Series trophy.

â€œWe canâ€™t be rolling out there, taking hits like that,â€ said Giancarlo Stanton, who hit a two-run homer late to avoid the shutout. â€œThatâ€™s not our game. Thatâ€™s not how we should come out and play. Weâ€™ve just got to come out and play better. He was obviously very upset, and rightfully so.â€

Boone didnâ€™t disclose what he said to his players. â€œItâ€™s got to be better,â€ the Yankeesâ€™ skipper said. â€œWeâ€™re certainly capable. We expect better.â€