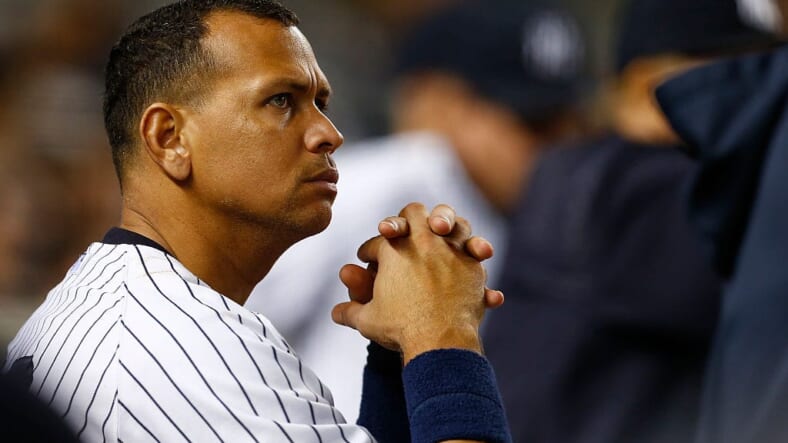 NEW YORK, NY - JUNE 05: Alex Rodriguez #13 of the New York Yankees looks on from the dugout against the Los Angeles Angels of Anaheim during a MLB baseball game at Yankee Stadium on June 5, 2015 in the Bronx borough of New York City. (Photo by Rich Schultz/Getty Images)

This approach or philosophy is extensive to lineup construction. With Yankees’ star Aaron Judge struggling so far in the postseason (he is 0-for-8 with seven strikeouts and a walk), A-Rod is completely against the team hitting him leadoff.

Judge, in 156 plate appearances, hit .366/.481/.740 with 13 home runs and a 1.221 OPS as the leadoff man, so he did put some numbers. Hitting him first also guarantees he sees the most plate appearances on the team. Rodriguez, however, makes a fair point: if deployed as the third or fourth hitter, Judge could have the chance to start seeing some pitches before going to the dish.

A-Rod wants the Yankees to stop the “leadoff Judge” experiment

“This is gimmicky baseball. You cannot let your best player, your best hitter (continue) hitting first. Babe Ruth didn’t do it. Barry Bonds didn’t do it. Frank (Thomas) didn’t do it. This guy (David Ortiz) didn’t do it. I didn’t do it. It doesn’t exist. The reason why is because you want to protect — you play chess. It’s like the queen of the chess board. You want to put the best two hitters in front (of Judge), and the best two hitters behind, and protect. The Yankees are putting the worst two hitters — the eighth and ninth hitter (in front). It puts an enormous amount of pressure. You want him to come up in that first at-bat and be very relaxed, see 12 or 14 pitches like I used to do with (Derek) Jeter and (Johnny) Damon and maybe (Mark) Teixeira, and maybe pop a three-run homer. It’s ridiculous that this guy’s hitting leadoff and it’s a mistake. I don’t know who’s doing it — Boone or (general manager Brian) Cashman — but somebody has to change that immediately.”

Evidently, there are pros and cons to the approach, but Rodriguez clearly wants the Yankees to avoid using the strategy anymore. With Judge’s struggles, perhaps it’s time to try something new, or return him to his customary second hole.

The Yankees will play a pivotal Game 3 of the AL Division Series against the Cleveland Guardians, and they need Judge to start making better decisions at the plate. It’s easier said than done, especially with such a talented Guardians staff throwing their best pitches at him, but it’s hard to envision New York going to the Championship Series with Judge struggling so badly.