3 players the Yankees should bench for the playoffs 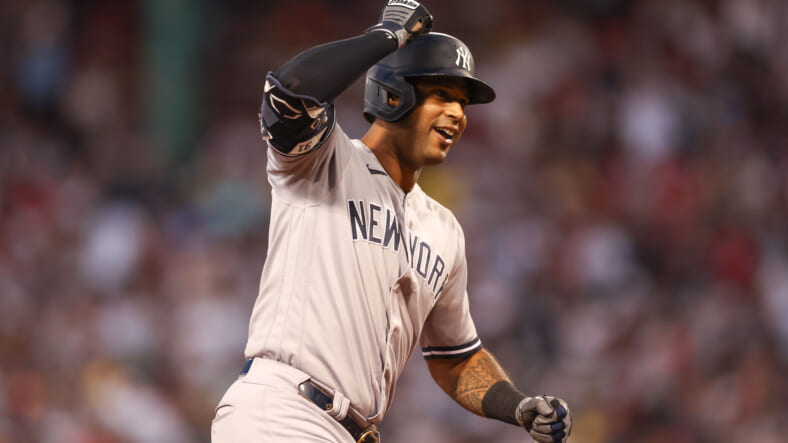 The New York Yankees have a few tough decisions coming up as the playoffs approach. The team has finally turned things around after a tough stretch following the All-Star break, having won five consecutive games. They currently sit 8.5 games above the Tampa Bay Rays in the AL east, desperately trying to increase their cushion after dropping down to single digits.

However, after exploding for 13 runs on Thursday night, the Yankees’ offense doesn’t seem to be quiet anymore but disruptive.

There are a few players that could be dropped to the bench come the playoffs, especially after already losing reps with the emergence of Oswaldo Cabrera.

Three players the Yankees should bench for the playoffs:

The most obvious player to get benched is Aaron Hicks, who has struggled considerably this season with polarizing offensive play. He’s hitting .214 with a 33.4% on-base rate, six homers, and 32 RBIs. He features a 22.3% strikeout rate and a 14.5% walk rate. He remains a patient batter that takes pitches, but he’s been unbelievably bad with runners in scoring position. In fact, he’s hitting .173 with a 28.4% on-base rate and just 14 hits over 81 at-bats with RISP.

Given his lackluster offensive production this year and spotty defensive qualities at times, the Yankees are better off going with Cabrera in the outfield, who’s been stellar defensively and recorded six combined hits in his last two games against Oakland.

Nestor Cortes headed to the injured list with a groin injury this week, but the Yankees are projected to have him back by the postseason. Starting pitcher Jameson Taillon will likely factor out of their postseason plans since he struggled this year to a degree. He does feature a 3.89 ERA over 138.2 innings, but he posted a 5.04 ERA in July and a 4.55 ERA so far in August. He’s given up 15 runs over 29.2 innings pitched this month.

After the acquisition of Frankie Montas, the expected starting rotation consists of Gerrit Cole, Montas, and Cortes upon his return from injury. Taillon could work out of the bullpen, but he struggles in his first inning of action. Specifically, he features a 5.04 ERA in the first inning, meaning he often times starts out slow but picks up momentum as the game goes on. I wouldn’t expect to see much of him during the playoffs for this reason.

Since DJ LeMahieu must feature as an everyday player and Giancarlo Stanton will fill the designated hitter role, either Gleyber Torres or Josh Donaldson will inevitably head to the bench.

Since DJ LeMahieu is capable of playing every infield spot at an adequate level, starting at third base isn’t out of the question. On the hot corner this season, LeMahieu has spent 370.2 innings, posting a .992 fielding percentage. Those are stellar numbers that indicate he’s more than capable of taking over without any issues.

Alternatively, the Yankees could bench Gleyber Torres, keeping Donaldson at third base and shifting LeMahieu to second, his natural position. Torres is hitting .193 with a 22% on-base rate in August.

On the year, Gleyber is batting .246 with a 29.7% on-base rate, 18 homers, and 50 RBIs. When he slugs, Torres is a fantastic piece to the Yankees’ offense, but he’s been ice cold lately, despite tallying four hits in his last three games.

If he can get hot towards the end of the season, the Yankees will undoubtedly feature him as a primary starting player, but it all depends on his momentum heading into the playoffs. Donaldson seems like the most likely to get benched at this point, given his offensive struggles this season.