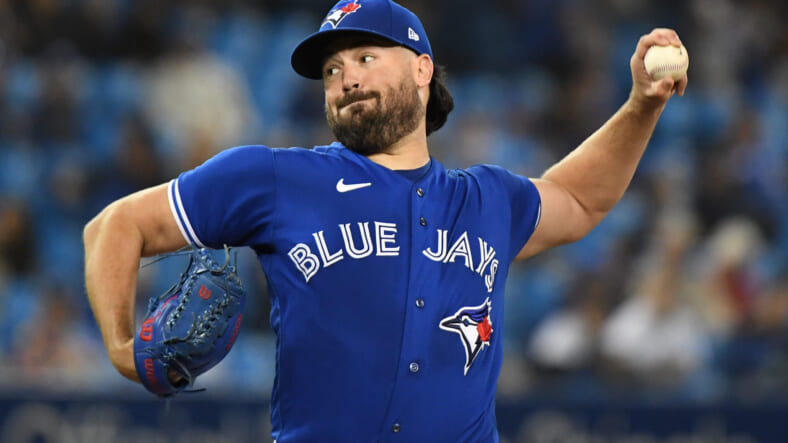 The New York Yankees have several priorities this off-season, and of course, the top one is finding a solution at shortstop. However, general manager Brian Cashman is willing to spend a pretty penny on the starting pitcher to pair with Gerrit Cole at the top of the rotation.

The Yankees had a one-year, $25 million deal on the table for Justin Verlander, who hadnâ€™t pitched in two seasons. Now, they’re left scouring the free-agent market for alternatives, and there are a few decent names to break down.

Three starting pitchers the Yankees could target this off-season:

Robbie Ray spent the 2021 season with the Toronto Blue Jays, posting arguably his best campaign yet. He logged a 2.84 ERA, 11.54 strikeouts per nine, and career-low 2.42 walks per nine. He earned a 90.1% left on-base percentage, the largest number of his career by a significant margin. While his ground balls generated sat at 37.2%, a bit lower than the Yankees would like, he pitched in 33 games last year and it was a catalyst behind Toronto season.

Coming off a stellar campaign, Ray could be looking for a long-term contract, and based on his inconsistencies, the Yankees may be hesitant to offer that. If heâ€™s willing to settle on a two-year deal with a third-year club option, Cashman could be intrigued by the lefty. At just 30-years-old, Ray features a fastball, slider, curveball, and change-up. He hovers around 94 mph on average, giving him adequate speed and a solid range of pitches to work with.

Another potential option is Kevin Gausman, who is coming off two years with the San Francisco Giants. Gausman posted a 2.81 ERA this past season with 10.64 strikeouts per nine and a 78.4% left on base rate. He recorded 14 wins and 33 appearances, showcasing how efficient he can be.

Gausman is another starter was had inconsistencies in the past but has also proved he can be a premium starter at 30-years-old. He features a fastball, slider, change-up, and split-finger fastball. Similar to Ray, he hovers around 94â€“95 mph with his fastball.

Given the Bombers are willing to spend $25 million on a starter, Gausman could be a potential solution, especially given his 42% ground ball right this past season.

If the Yankees wanna get a bit riskier, Carlos Rodon could be in play. At 28-years-old, Rodon is coming off his best season yet, earning a 2.37 ERA with 12.55 strikeouts per nine and an 82.2% left on-base percentage. Over 24 games, Rodon featured a fastball, slider, and change-up, hovering around 95 mph. He saw a massive uptick in velocity and reliance on his fastball compared to recent seasons. With that type of growth at his age, Rodon could be a pitcher on the rise, and one the Yankees can continue to grow.

Rodon has dealt with some injuries in the past, but pitching in 24 games this season suggests he can be a reliable arm behind Cole. It is fair to mention that Carlos would be the riskier of the three, but his upside is likely a bit higher given his age and significant development this past season.