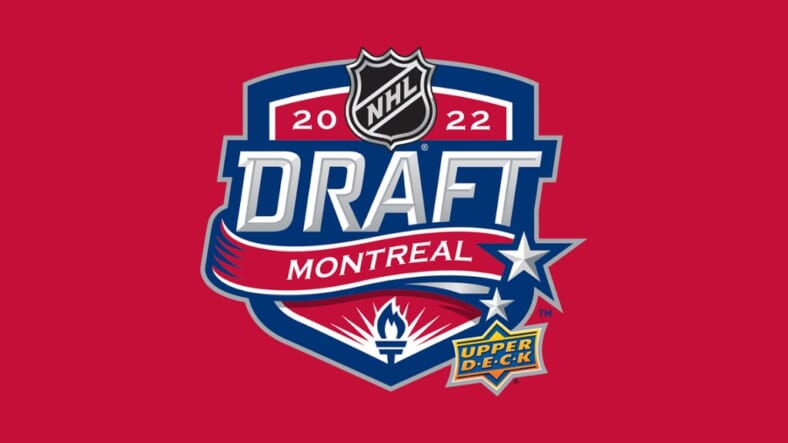 The New York Rangers made six selections in the 2022 NHL entry draft on Friday which was held in Montreal, Quebec.

The New York Rangers completed the NHL Entry Draft on Friday selecting six players as they continue their progression to winning a Stanley Cup in the near future.

Congratulations to the #NYR Class of 2022! pic.twitter.com/pCoKXJxQMZ

Jul 8, 2022; Montreal, Quebec, CANADA; Adam Sykora gives an interview after being selected by the New York Rangers in the second round of the 2022 NHL Draft at the Bell Centre. Mandatory Credit: Eric Bolte-USA TODAY Sports

2nd Round, 63rd Overall
With the 63rd overall pick in the 2022 NHL Entry Draft, the Rangers selected forward Adam Sykora.
Sykora, 17, played the majority of his 2021-22 season with HK Nitra in the Slovakia league, recording 10 goals and seven assists for 17 points in 46 games. In 19 playoff games, the Piestany, Slovakia notched two goals and three assists for five points.
The 5-10, 172-pound forward has played in 61 games with Nitra over two seasons, registering 10 goals and nine assists for 19 points and a plus-3 rating.
Internationally, Sykora has skated for Slovakia in several tournaments, including the 2021-22 World Championships. In addition, he earned a silver medal in the Hlinka Gretzky Cup in 2021-22.

3rd Round, 97th Overall
With the 97th overall pick in the 2022 NHL Entry Draft, the Rangers selected forward Bryce McConnell-Barker.
McConnell-Barker, 18, skated 23 goals and 26 assists for 49 points in 68 games with the Soo Greyhounds of the Ontario Hockey League (OHL) in 2021-22. Among Greyhounds last season, the London, Ontario native finished third in goals and fifth in points.
Prior to playing in the OHL, the 6-1, 193-pound forward played for the Komoka Kings of the Greater Ontario Junior League.

5th Round, 159th Overall
With the 159th overall pick in the 2022 NHL Entry Draft, the Rangers selected defenseman Vittorio Mancini.
Mancini, 20, completed his first season with the University of Nebraska-Omaha Mavericks in 2021-22, playing 38 games. The 6-3, 215-pound defenseman finished with five assists.
The Saginaw, Michigan native split his 2020-21 season with the Green Bay Gamblers (USHL), Hanhals IF (HockeyEttan), and Frolunda’s J20 team. With Green Bay, he posted four goals and nine assists for 13 points and a plus-5 rating in 33 games.

5th Round, 161st Overall
With the 161st overall pick in the 2022 NHL Entry Draft, the Rangers selected forward Maxim Barbashev.
Barbashev, 18, tallied 15 goals and 27 assists for 42 points in 59 games for the Moncton Wildcats of the QMJHL in 2021-22. The Moskva, Russia native ranked tied for third on Moncton in points, fourth in goals, and tied for second in assists.
In two seasons with Moncton, the 6-1, 183-pound forward has notched 21 goals and 31 assists for 52 points in 69 games.

6th Round, 191st Overall
With the 191st overall pick and the team’s final pick in the 2022 NHL Entry Draft, the Rangers selected forward Zakary Karpa.
Karpa, 20, skated for Harvard University in 2021-22, posting six goals and six assists for 12 points in 33 games and a plus-nine rating.
The 6-2, 185-pound forward played in the USHL in 2020-21 before going to Harvard, split between Omaha and Des Moines. A Newport Beach, California native, Karpa finished the 2020-21 season with 28 points (9G-19A) in 48 games played.
In addition, Karpa played two seasons with the U.S. National Team Development Program (2018-20).

General Manager Chris Drury did not make any trades during the draft as they continue to search for a backup goaltender after trading Alexandar Georgiev to the Colorado Avalanche on Wednesday.

The Club also failed to address their center situation as both Ryan Strome and Andrew Copp will both be heading to free agency on July 13th.