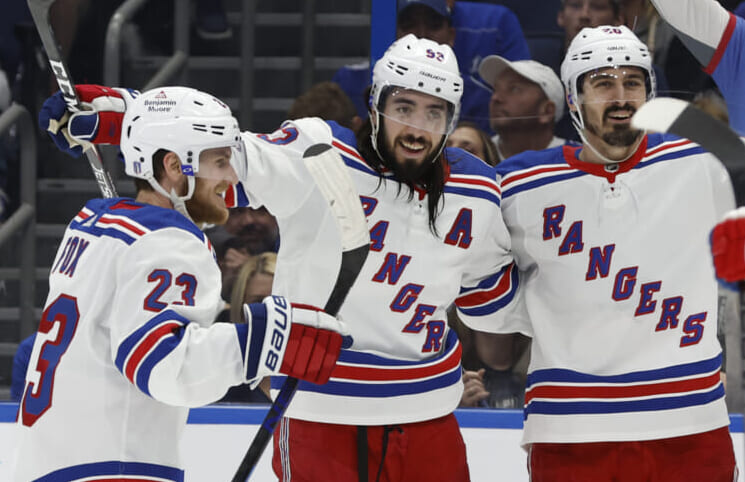 The New York Rangers will play in their third preseason game on Thursday in a contest against the New Jersey Devils.

With their third preseason game in four nights, the New York Rangers will begin a home and home series against the New Jersey Devils tonight at the Garden and then head to the Prudential Center on Friday night.

The line combinations used in Thursday morning’s practice should be the same for tonight’s game.

Lafreniere skating with Chytil and Kakko is a pleasant surprise after the slap shot he took to his foot on Tuesday night in Boston. Of the injury, Lafreniere said said, “he’s feeling good. Just a bruise. It was painful when it happened but didn’t last too long.”

The coaching staff will be looking to see the ‘kids” line continue to work well with each other as it’s projected to be a unit when the season begins in under three weeks.

Zibanaejad, Kreider, Kakko, Chtil, and Fox were the number one power play units working together.

-Head coach Gallant was unsure who or how he would handle the alternate captain situation now that Jacob Trouba is the captain and Ryan Strome is no longer with the team. The coaching staff may decide to rotate players as they did last season. Adam Fox wore an “A” in Boston on Tuesday.

-Vincent Trocheck was not feeling well today and did not practice, nor will he play tonight.

-Artemi panarin has yet to play in a preseason game, but he should be in the lineup tomorrow in New Jersey.

-Anticipate some announcements regarding players in camp. The team is carrying 61 players, but that number should be significantly reduced sometime today or tomorrow. The Rangers AHL affiliate, the Harford Wolf Pack, opens their training camp on Monday.