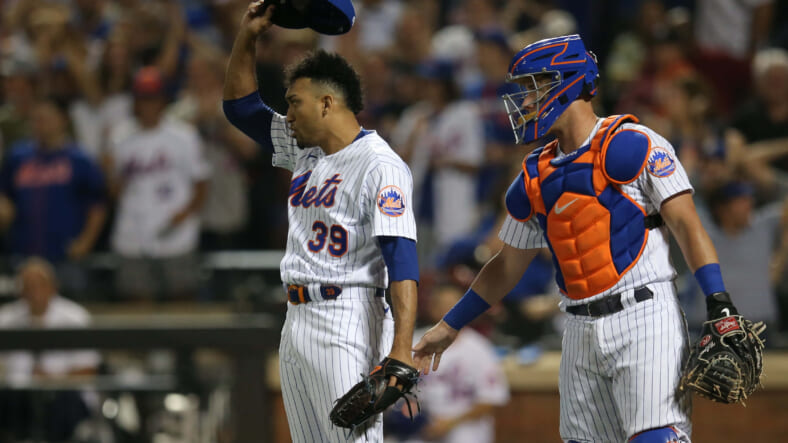 The New York Mets season has been riddled with tough breaks and bad bounces, but things moved in their favor against the Miami Marlins. An error from the Marlins and a ball nicking of Jesus Aguilar‘s glove in the seventh inning resulted in Dominic Smith‘s RBI single, which gave the Mets just enough to win 4-3 and sweep the Marlins. The whole game was filled with errors as both teams combined for seven errors.

Dominic Smith just ripped a 104-mph single off Jesús Aguilar's glove, which made it count as a fair ball and a go-ahead RBI hit.

The Mets had themselves a situation they had failed in for a majority of the season. Patrick Mazeika‘s single and error by Jesus Sanchez allowed Jeff McNeil to get to third base with one out. Smith ripped the ball over the first-base bag, and since Aguilar was holding on Mazeika, he reached out his glove to attempt to make a play. If Aguilar let the ball go, it would have gone foul, but instincts took over, and it allowed the Mets to steal a run.

Carlos Carrasco had a typical start for his 2021 season. Miguel Rojas ambushed him on the first pitch to give the Marlins an early run, and the fish tacked on another to make it 2-0 in the first. Carrasco once again settled in after the first inning to put together 5.1 innings allowing three runs and striking out five. Aaron Loup relinquished the lead with two walks in relief but survived the keep the game tied. The following three relievers for the Mets all had hitless outings.

The Mets had their work cut out for them early against Marlins ace Sandy Alcantara but were up to the task. Jonathan Villar took notes from Rojas to drill a leadoff home run on Alcantara’s first pitch. It was the first time in MLB history where both team’s leadoff hitters homered on the first pitch. Mazeika was the only Met with multiple hits and also recorded a double. Francisco Lindor only had an RBI double on the night but could have easily had a couple more hits if he was not hitting the ball at people.

The win is the fifth consecutive for the Mets, and they have an opportunity to move within four games of the first-place Atlanta Braves. On Friday, they will begin a five-game series with the Washington Nationals. Two former Long Island Ducks face-off as Rich Hill takes the mound against Sean Nolin. The first pitch from Nationals Park is scheduled for 7:10 p.m. ET.