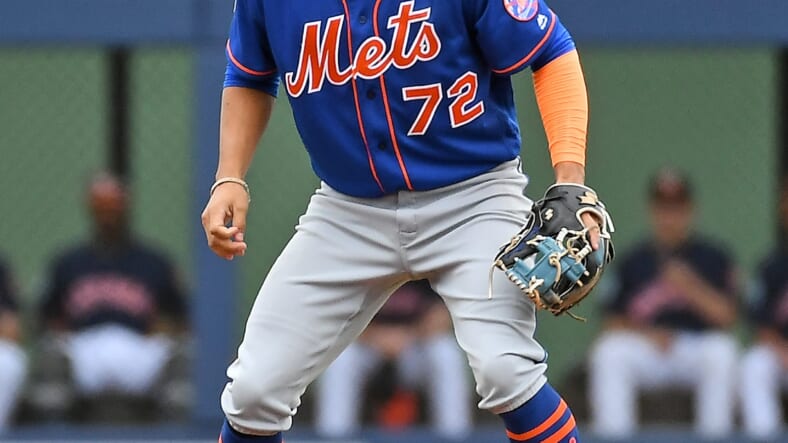 Though not the showing the New York Mets had hoped for, they did have four names among the top 100 prospects in baseball. All four were position players, and none of them were in the top 50, which shows the much-needed work in their farm system. Ronny Mauricio, Francisco Alvarez, Andres Gimenez, and Brett Baty are the four highly touted prospects who made the list.

(Jarred Kelenic clocked in No. 11 for the Mariners. And no, I'm not noting that to troll. It's for perspective.)

Mauricio is a young shortstop who still has not left his teenage years yet. He has the highest ceiling of any prospect in the Mets system and is also a switch hitter. His bat still needs work, only hitting .268/.307/.357 with four home runs in A ball. Mauricio will get better as he continues to mature and grow into his 6’3″ frame. Mets fans should not expect to see him in the big leagues for at least two seasons.

Alvarez gives hope to an organization that can only claim Todd Hundley as the last homegrown catching prospect to pan out in the big leagues. He is another very young prospect who just turned 18 in November. Alvarez hit .312/.407/.512 with seven home runs at two different levels of rookie ball. He is still more of a hitter, but his solid arm behind the dish gives hope that he can become an all-around catcher as he continues to grow in the minors.

.@Mets prospect @andresgimenez has been in the lab down in Florida. ??? pic.twitter.com/cLEQM7jtq7

It was a surprise to see Gimenez fall so low on the list. His bat did take a step back in 2019 only hitting .250/.309/.387 in double-A. Gimenez Arizona Fall League numbers showed he had something to prove at .371/.413/.586 with 15 RBIs over 18 games. He is an excellent defender at shortstop, but his bat will either propel him to success like Amed Rosario or flounder like Ruben Tejada. Much like Rosario, he does not walk often, which will force him to hit .275 with some power to have a successful career. 2020 will be a big year to show if Gimenez is ready to take the next step up to Triple-A.

Baty’s first season of professional ball resulted in him hitting .234/.368/.452 with a very high strikeout rate. He barely makes the list because the expectations were higher, but his power potential keeps him on the list. His defense is still in question, but a full 2020 will give a better evaluation of his future at third base. Baty’s separates himself from other Mets prospects because of his good walk rate and 30+ home run potential.