Mets stunned by Dodgers as they target star Justin Verlander, via MLB Insider 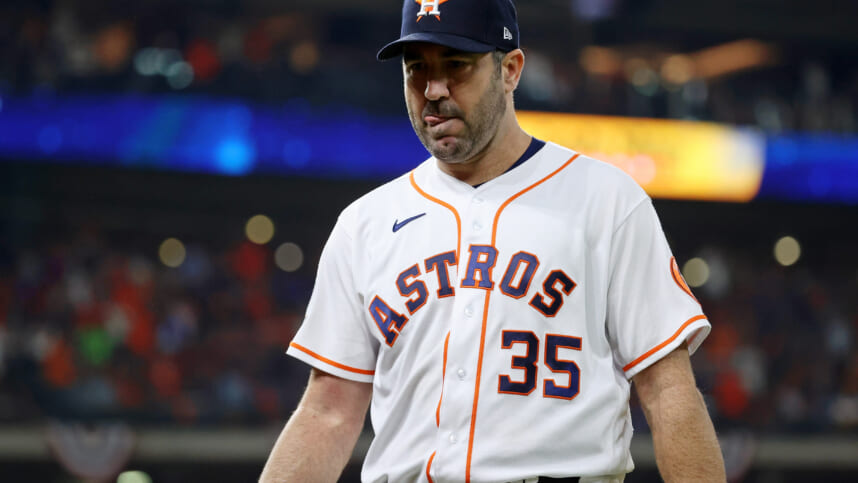 Oct 19, 2022; Houston, Texas, USA; Houston Astros starting pitcher Justin Verlander (35) walks off the field after pitching against the New York Yankees during the third inning in game one of the ALCS for the 2022 MLB Playoffs at Minute Maid Park. Mandatory Credit: Troy Taormina-USA TODAY Sports

The New York Mets currently have a huge concern atop their starting rotation. With ace Jacob deGrom a free agent, having an unknown future with the team, and a competitive market, the Mets have got to be ready to pivot if necessary.

Arguably, no star pitcher on the market makes more sense for the Mets should they lose deGrom than Justin Verlander. Unfortunately, though, Verlander will happen to have a strong market as well.

Source shares Dodgers could give Mets competition for Justin Verlander:

One team, per Jon Morosi of MLB Network, that could give the Mets problems when it comes to landing Verlander is the Los Angeles Dodgers. As to why Morosi had the following to say:

“I would say that of the large-market National League teams, while the Mets are clearly interested … I think the fit with the Dodgers and Verlander is at least as good and probably even better than the fit with the Mets.”

While that likely reality is tough, it is no surprise. With their winning reputation, at a later point in his career, the Dodgers are an easy fit to see for Verlander if the contract adds up. Knowing so, if deGrom signs elsewhere, this should only apply added pressure to the Mets to be ready to swing when the opportunity presents itself for Verlander.

The good news is that Ken Rosenthal of The Athletic did share that the Mets spoke with Verlander on a Zoom call recently, this past weekend.

Also, Mike Puma of the New York Post reported that the Mets see Verlander as a “prominent possibility” as a backup plan to deGrom.

Whether it be deGrom, Verlander, or Carlos Rodon, it will by no means be easy for the Mets to come away with any of these prime free-agent starting pitchers. In the end, though, if the Mets want to take the next step that they expect from themselves next year, they have to find a way to reach a deal with one of the three.