Mets retain Daniel Vogelbach, here’s what to expect from him in 2023 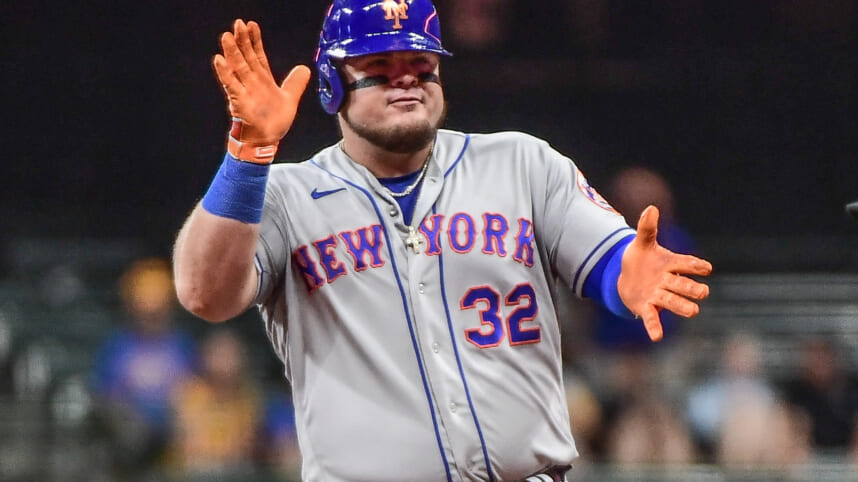 It was made official by the New York Mets last night that they would retain Daniel Vogelbach. The designated hitter, who the Mets acquired prior to the 2022 trade deadline last summer, had a club option for 2023 that the Mets decided to exercise.

The owed salary on his option is very cheap, at just $1.5 million. While Vogelbach has his limitations, with some of the value he does provide, the price tag is a bargain, making this call an easy one for the Mets.

What will DH Daniel Vogelbach give the Mets next year?

Vogelbach should be more of a depth piece as opposed to an everyday player he was at times in 2022. He is best as more of a role player than a consistent fifth hitter in the lineup.

Could the Mets turn their attention to superstar pitcher Justin Verlander?

He does not offer anything on the field or the bases, but Vogelbach can and will be counted on to give the Mets long, quality at-bats next year. He can work counts with both his great eye and bat discipline. In 55 games for the Mets last year, Vogelbach had 33 walks.

Vogelbach is still fairly young as well, as he turns 30 in a little over a month. He gives the Mets a ton of size at the plate. That size adds some power to his bat. Vogelbach hit 18 home runs last season.

The Mets need to add upgrades to their starting lineup, but solid depth with a power, left-handed, experienced bat in Vogelbach gives the Mets a nice known commodity. With the Mets expected to have some youth in their lineup next year rotate in the DH spot with Brett Baty, Francisco Alvarez, and Mark Vientos, the age of Vogelbach helps complement them there. Ultimately, the expectations for Vogelbach at the plate, when in the lineup will remain the same.