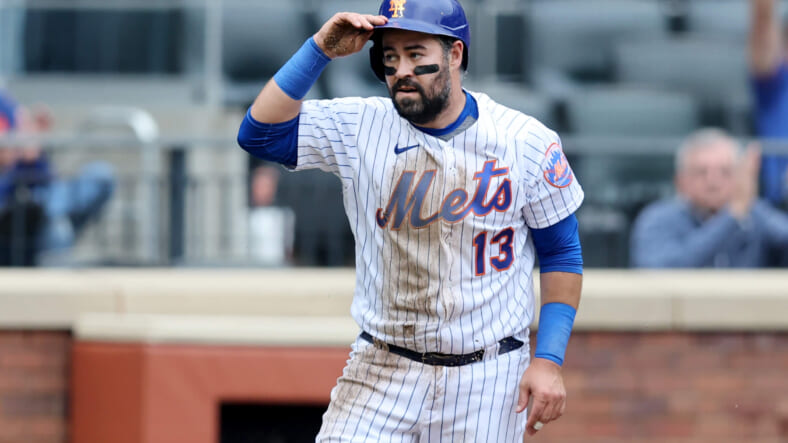 The New York Mets are coming off a terrible 13-1 loss last night in Atlanta against the Braves. Now, the Mets are 75-41 with a 4.5-game lead over the Braves in the division. Despite being tied for second in wins in all of baseball, the Mets are still in a tough competition to win their own division.

In last night’s disaster, Carlos Carrasco got hurt. He pitched just two innings before leaving with left-side tightness. Carrasco is set to undergo an MRI today. Hopefully, the Mets get some good news as the injuries have recently piled up.

Is Brett Baty close to being called up?

Luis Guillorme has been a valuable asset for the Mets in all of their recent success. With his left groin strain injury from Sunday’s game, along with Eduardo Escobar playing through some tightness it has led Mets fans to wonder, could Brett Baty be called up?

When Buck Showalter was asked about the possibility of calling up Baty yesterday, he had this to say, “There’s conversation since early this morning, we’ve been talking through a lot of different things. Took everything under consideration.” Showalter followed up with, “We’ll see where the next few days take us.”

Certainly, there is a chance that the Mets could ultimately call up Baty soon. Two days ago, Mets beat reporter for the New York Post, Mike Puma, said it sounds like the Mets “haven’t ruled out the possibility” of promoting Baty.

Tonight in Atlanta, Taijuan Walker will be taking the mound for the Mets as they look to bounce back. With the Mets still in a tight competition for the division with no Guillorme for at least a month and an injured Escobar, it may be the perfect time for the Mets to call up their second-rated prospect in Baty.